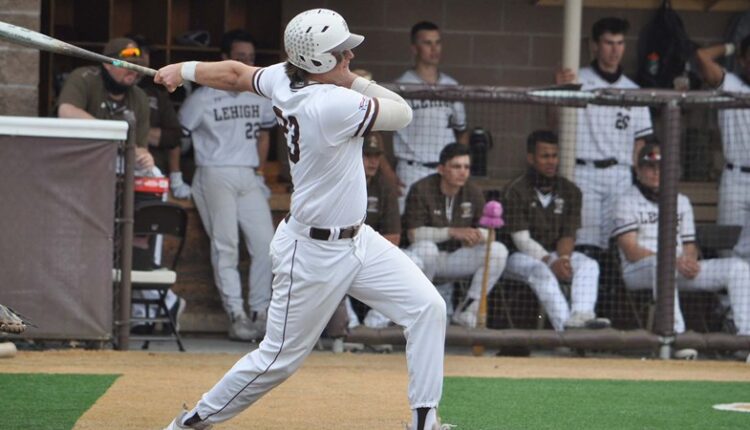 BETHLEHEM, PA. – The Lehigh baseball team went out of their way to beat Bucknell 7-4 in the first doubleheader game on Saturday, but fell 3-1 into a fast-paced nightcap. At the start of the day, Junior Mason Black dominated 12 batters in 5.2 innings. In the second game, the Mountain Hawks were held down by Bison, who started pitcher Will Greer, who ended a full nine innings game with only two strokes and no walks. Lehigh is now 15-13 in the season, 12-7 in the Patriot League and remains at the top of the league placement with half a game over Army West Point.

“Very well played baseball today,” said Lehigh head coach Sean Leary. “The second game – a nine-inning game – lasted less than two hours, which was previously unknown. Both guys threw punches. We hit about as many hard balls as we hit in one game, and they didn’t find any. ” Holes. We played very well but didn’t take any breaks. “

Black was the story on the hill in game one that allowed no hits through three innings and only two through five. The offensive resulted in one run in the first inning, another in the fourth, and three in the fifth to create a 5-0 advantage. The greatest success came from sophomore Adam Retzbach, a double with two runs in the fifth.

Bucknell racked up four runs in the sixth to draw within one, but a two-run bottom of the sixth – completed by an RBI double from Junior Casey Rother – gave Lehigh a 7-4 advantage that turned out to be the final. Senior Sam Wurth threw the last 1.1 innings for the save.

“Mason put us in the lead early on and I thought it was a good example of our team keeping up the pressure that kept adding runs late in the ball game,” said Leary. “That was a pure team win. There was pitching, defense and I thought the offensive did a good job when it comes to going late.”

Despite only one hit by the first eight innings of the second game, the Mountain Hawks and Bison stood tied to the top of the eighth inning. This was in large part thanks to the unlucky loser Junior Luke Rettig, who only allowed six hits and two runs (both deserved) through eight innings while scoring seven hits.

Bucknell used a sacrificial fly in the first inning to take a 1-0 lead before a brace from Joe Gorla RBI Lehigh even pulled in the fourth. That score stayed until the bison scored once in the eighth goal and another in the ninth, both at RBI singles, to take a 3-1 lead. Lehigh scored twice in game nine, but a pop-out secured Bucknell the win.

On the plate, Rother finished the first game 2: 3 with a pair of RBIs. Retzbach was 1: 3 with two runs. Senior Eric Cichocki was 1-3 with one walk and two runs scored. In the second game, Gerard Sweeney was the only Mountain Hawk to reach the base twice by one hit and one hit by bad luck. Rother finished the afternoon 3: 7.

“In the second game it was difficult to lose a game if you really didn’t do a lot wrong,” said Leary. “Very rarely does it happen that you feel good, guys hit the ball hard, but we literally hit it right at them.”

Lehigh and Bucknell will meet again in Lewisburg on Sunday. The game time is set to 2 p.m.

Women’s Tennis went to Easton and tamed the Leopards on Saturday, winning 7-0