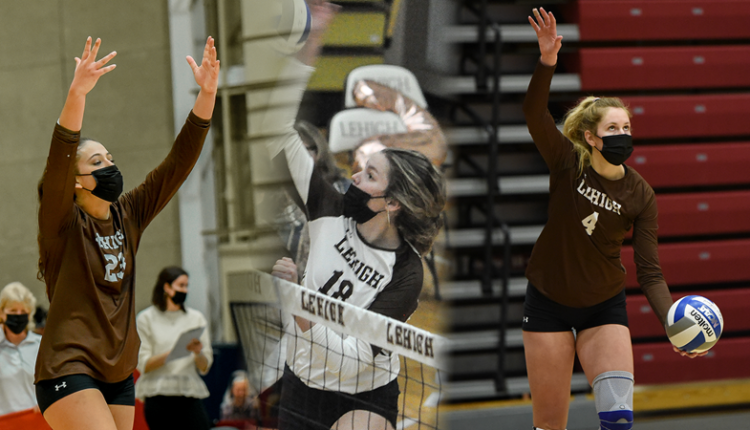 BETHLEHEM, PA. – The Lehigh Volleyball Program distributed its list of team awards for the Spring 2021 season to three very deserving members of the team. In addition, all six members of the freshman class received letters for the first time.

Sabrina Lancaster, selected as the second All-Patriot League selection for the first time in her career, is this season’s winner of the program’s Outstanding Athlete Award. She finished the team with 110 kills, averaging 3.7 per set, and got 63 kills for a total of 12 blocks. She recorded at least 10 kills in her last seven games of the year and also received two doubles doubles. Lancaster had a fantastic four year career for the Mountain Hawks, producing a stats sheet with 941 career kills, the eleventh highest in program history.

Senior Claire Nagelhout recognized her hard work in the classroom and on the pitch by joining the Academic All-Patriot League team this spring. She receives the Scholar Athlete Award from the program. Nagelhout is a psychology student and has achieved a cumulative GPA of 3.78 during her career. She has received a GPA of 4.0 four times, including in the fall semester 2020. She started eight of Lehigh’s nine games and ended with 29 kills and 15 blocks, both career highlights. She was fabulous in Loyola Maryland, winning five sets with 12 kills and five blocks.

The Coaches Award is given to people who have made a significant contribution to the well-being of the team in terms of recruitment, improvement or special leadership. This year’s recipient is Junior Ava Hudson. Hudson became one of the Mountain Hawks’ three tri-captains in 2020-21 and has grown to become one of the program’s hottest leaders during her time at Lehigh. She played in six of Lehigh’s nine games that season and scored 21 kills, averaging 1.50 per set, also 23 digs with two total blocks.