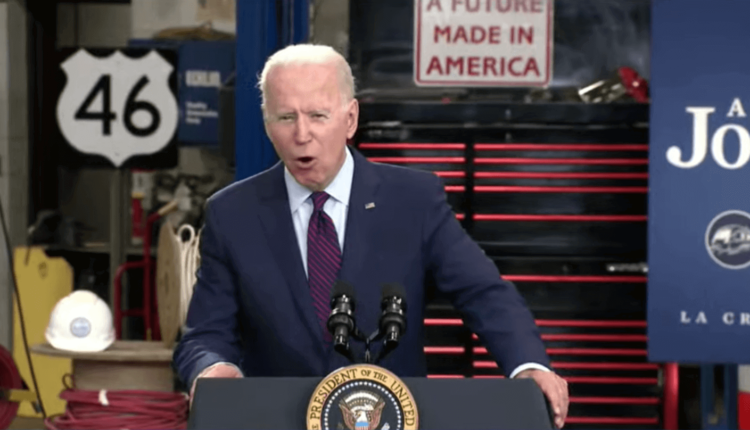 LA CROSSE, Wisc. — In a trip to the swingiest congressional district in the swing state of Wisconsin, President Joe Biden detailed a bipartisan deal on infrastructure, focusing on how it would help families and workers across Wisconsin and the country.

Speaking from the municipal transit utility in La Crosse, Biden discussed the ways the infrastructure deal will help Wisconsinites with some of the state’s most pressing problems.

Biden said the deal will include the removal of harmful “forever chemicals” known as PFAS from waterways — a problem that drove the state to provide free bottled water to residents of nearby French Island. He also said the deal includes money to replace lead service lines in cities such as Milwaukee and to bring broadband internet to the many rural residents who still don’t have adequate access.

Pa.’s Toomey: Tax hikes are off the table to pay for bipartisan infrastructure deal

On the 65th anniversary of the creation of the interstate highway system, the president also pointed to the deal’s proposed improvements to highways and country roads; expanding electric vehicle charging stations in an effort similar to building gas stations across the country and improving the country’s electric grid. The plan, Biden said, would also help the U.S. mitigate, prepare for and become more resilient against climate change.

Biden pointed to progress in the deal on an issue that has long been controversial in Wisconsin — passenger rail. More than a decade after Wisconsin Republicans killed an expansion of high speed rail between Madison and Milwaukee, Biden said the bipartisan infrastructure plan would create Amtrak stops in Green Bay, Eau Claire, La Crosse and Madison, possibly cutting travel time between La Crosse and Chicago from four hours by car to two hours by train.

Biden was speaking about what is so far only the “framework” for a congressional deal on an infrastructure package as he negotiated with a bipartisan group of Senators. At the same time, he and Democratic leaders in Congress are working on a much broader bill focused on progressive priorities through the budget reconciliation process that isn’t subject to the Senate filibuster.

“After months of careful negotiation of listening, compromising together and in good faith, moving together with ups and downs and some blips, a bipartisan group of senators got together and they forged an agreement to move forward on the key priorities of my American jobs plan,” Biden said. “As a result, this is a generational investment to modernize our infrastructure, creating millions of good paying jobs.”

Biden himself said that he still hopes some of the provisions of his American Families Plan will be passed in a future bill — pointing to his desire to make permanent the expanded child tax credit that was created as a temporary program earlier this year.

Speaking from a state that has seen its unemployment rate drop below 4% this year — nearly reaching pre-pandemic levels — Biden tried to make the case that the provisions in the infrastructure deal will pay off in the long term for people in western Wisconsin and the rest of the country.

“This is the answer for good paying jobs,” Biden said. “Jobs not just in our biggest cities along our coast, but in small towns across the country — so families can build wealth and opportunity in rural home towns and don’t have to leave when they grow up. I’ve said it all along, this is a blue collar blueprint to rebuild America.”

“All you want as a middle class person is just have a little bit of breathing room,” he continued. “That’s why we got to build this economy from the bottom up and the middle out, not trickled down — creating good paying jobs with dignity and jobs that cannot be outsourced.”

The president was originally supposed to spend his trip to the state’s “driftless region” — named for its unique geological features that were left untouched by the glaciers that flattened other parts of the state — along with Agriculture Secretary Tom Vilsack. The president was scheduled to visit with a dairy farmer and discuss the needs of rural economies across the country. But after the passage of the infrastructure deal hit a snag just days after it was announced, the plan changed. 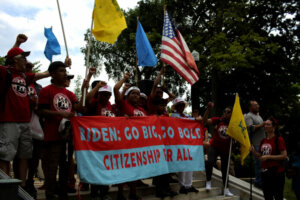 The day before Biden’s arrival, a group of immigration activists finished a nine-day march from Milwaukee to Madison in an effort to push the president into embracing immigration reform and providing a pathway to citizenship for undocumented immigrants.

The group, Voces de la Frontera, connected the needs of dairy farmers in the dairy state to the needs of immigrant laborers.

Instead, Biden focused on infrastructure — but did touch on the ways that the country’s farmers will benefit from the package. Expanding broadband access and improving rural roads, he said, would help farmers across the country sell their products.

Before he left the state, the president enjoyed some of those products, stopping for ice cream made from a Wisconsin dairy at The Pearl, a local ice cream parlor in LaCrosse.

Henry Redman is a reporter for the Wisconsin Examiner, a sibling site of the , where this story first appeared.

Legal recognition for transgender, nonbinary Pennsylvanians doesn’t come easy. Here’s why some are calling for change