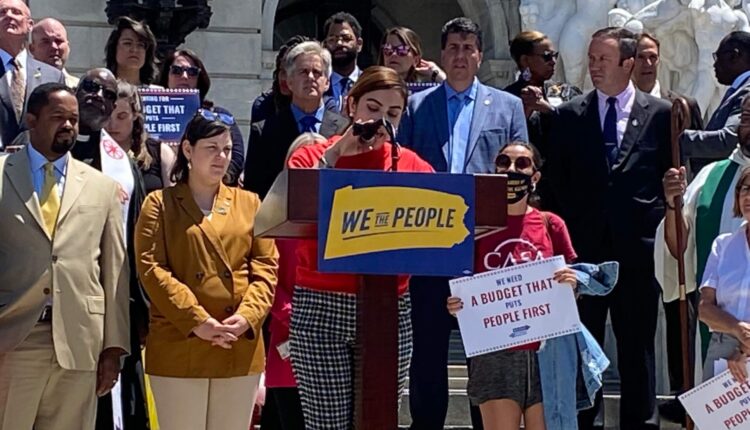 ‘I’m not tired of standing up. Are you?’ As deadline looms, progressives push their budget agenda | Thursday Morning Coffee

Marilu Saldaña, a Harrisburg waitress who came to the United States from Mexico when she was 13, speaks at a Capitol news conference on Wednesday, 6/23/21 (Capital-Star photo by John L. Micek).

With less than a week to go before the deadline to pass a new state budget, there’s nothing particularly new about the battery of rallies and press conferences that have punctuated the calendar as legislative leaders and the Democratic Wolf administration try to reach a deal before the current fiscal year winks out of existence at midnight on June 30.

But what is new is that the demands for increased spending on early childhood and K-12 education, paid leave, and other worthy causes are backed up by a generational infusion of cash, courtesy of $3 billion in excess tax collections and $7 billion in federal aid.

And Pennsylvania progressives, are making the most of this moment amid rumblings that they may come away disappointed from the final spending plan.

It also comes as Democrats work to draw a bright-line contrast with legislative Republicans’ obsessive focus on pushing through a suite of voting restrictions that include new voter identification requirements and tighter mail-in balloting deadlines.

“So this is budget season, and we are prepared to be here for as long as we need to be here to do real negotiations,” House Minority Leader Joanna McClinton, D-Philadelphia, told the Capital-Star on Wednesday. “But when we spend, you know, a quarter of a day on a [election law bill] that [Gov. Tom Wolf] has pledged to veto, it becomes, in fact, theatrical. It becomes a waste of time.”

McClinton offered her comments even as an alphabet soup of progressive organizations massed on the Capitol steps just a few feet away to offer up their own pleas for a budget that, in the words of one activist, “works for all of us.”

The speaker, Marilu Saldaña, a Harrisburg waitress who came to the United States from Mexico when she was 13, said she and her husband “want and deserve the American dream,” but fear it’s out of reach.

With the spending plan now before them, she said, lawmakers have the chance to allay the fears of Saldaña and so many other Pennsylvanians.

“We immigrants show our love for this country by working at the hardest moments,” Saldaña said. “We need a budget that works for all of us. And we need it now.” 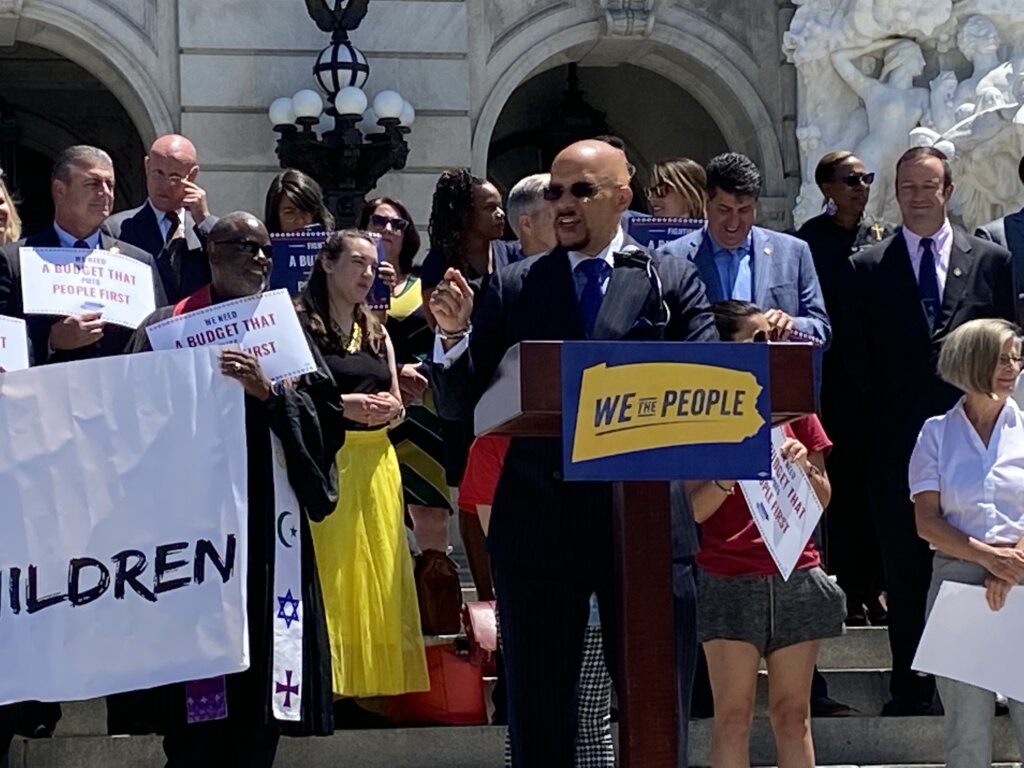 In typical fashion, state Sen. Vincent Hughes, D-Philadelphia, didn’t mince words when it came to his preferred fate for the combined $10 billion windfall.

“Spend the money,” Hughes, the ranking Democrat on the Senate Appropriations Committee, thundered. “Spend the money. Let’s invest in our children. Let’s create jobs … Let’s get rid of lead and asbestos in our schools.”

As he left, Hughes led the crowd in a chant where he exhorted them to … say it with us now … “Spend the money.” 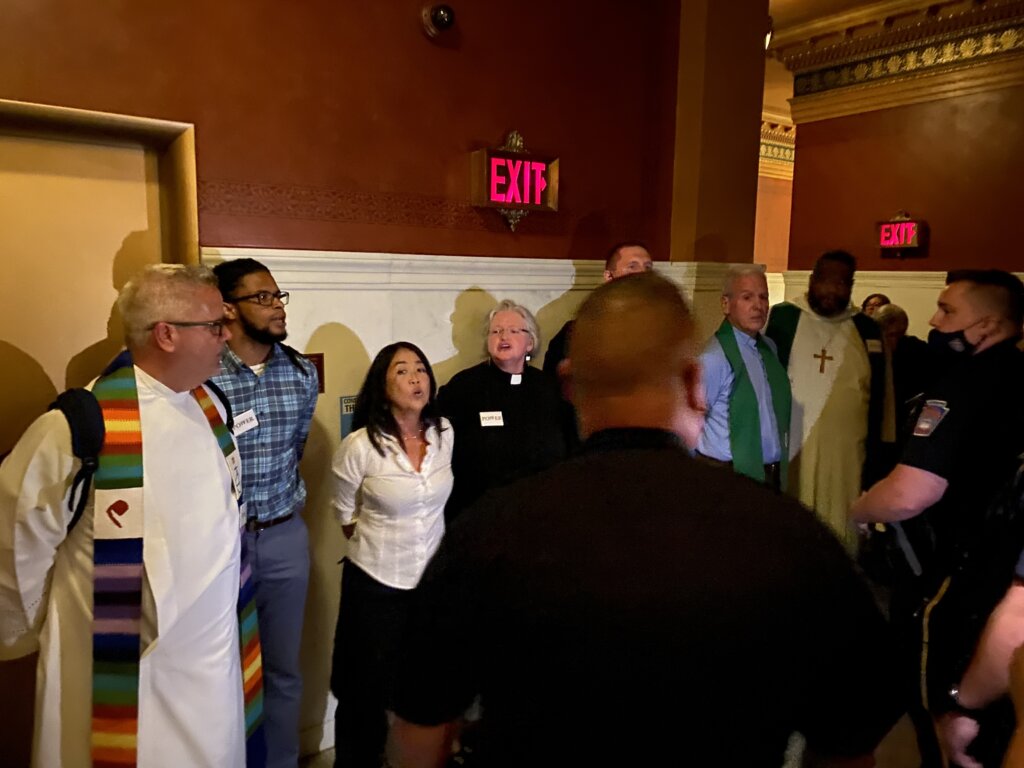 Meanwhile, more than a dozen members of the clergy, activists, and a member of Philadelphia City Council were detained Wednesday after they unsuccessfully sought entrance to the state Senate’s public gallery and ignored a dispersal order from Pennsylvania Capitol Police.

The group, which included members of the statewide interfaith group POWER, as well as At-Large Philadelphia Councilmember Helen Gym, a likely Philadelphia mayoral candidate, gathered at the Capitol around 1 p.m. on Wednesday afternoon to visit lawmakers’ offices and to appeal to them to approve Gov. Tom Wolf’s proposal to inject an additional $1.55 billion into public education and channel all of that money through the state’s Fair Funding Formula.

Black plastic zip ties were clearly visible around the wrists of those detained. The protest came as lawmakers in the House and Senate raced to approve a spending plan for the fiscal year that starts on July 1.

In all, 15 people were taken into custody and were issued “non-traffic” citations for defiant trespass, said Troy Thompson, a spokesperson for the state Department of General Services, which has oversight of the Capitol Police.

The 15, who included Gym, were not booked, and have the choice of paying a fine, or challenging their citation before a magisterial district justice, Thompson said.

In a lot of ways, it was just another day on the Hill, replete as it was with rallies and drama.

But in the ways that matter, it hammered home to vast differences in world views between Democrats who don’t want the state to pass up the once-in-a-generation chance to improve the lives of so many, and a Republican majority whose priorities, from abortion access and transgender rights to voting rights, seem set on being the party of no.

Given the historic moment before us, it’s a far from satisfying answer.

Our Stuff.
The GOP-controlled state Senate has approved a proposed constitutional amendment that would mandate voter identification for every election — sending it to the House, Marley Parish reports.

A proposal to restrict the Pennsylvania Secretary of Health’s powers during health emergencies and ban government agencies, including schools, from checking for proof of a COVID-19 vaccine passed the state House in a 112-89 party line vote on Wednesday, Stephen Caruso reports..

More than a dozen members of the clergy, activists, and a member of Philadelphia City Council were detained Wednesday after they unsuccessfully sought entrance to the state Senate’s public gallery and ignored a dispersal order from Pennsylvania Capitol Police, I report.

Philadelphia Mayor Jim Kenney is not ready to dump his violence prevention plan even as the years long upward trend of killings and shootings shows no signs of ebbing, our partners at the Philadelphia Tribune report.

On our Commentary Page this morning, Pottstown’s school superintendent calls for equitable education funding this budget season. And the head of the African-American Chamber of Commerce for Pa./N.J./Del. says lawmakers also shouldn’t pass up the chance to invest in Black businesses this budget season.

Elsewhere.
The Inquirer takes a look at what Philadelphia is getting in return for the millions of dollars it’s spending on violence prevention programs.
Pennsylvania’s state university system says it can’t require COVID vaccinations – but one campus already is, the Post-Gazette reports.
Pennsylvania’s budget debate needs an upgrade. PennLive’s John Baer says he has the fix.
Physicians in Lancaster County are warning of a spike in child lead poisoning cases, LancasterOnline reports.
The Morning Call has the details on a unity vigil in Bethlehem on Wednesday night.
Former Luzerne County Manager David Pedri talks to the Citizens’ Voice about his recently ended tenure.
After years of trying, local police departments in Pennsylvania may finally win the right to use radar to catch speeders, USA Today’s Pennsylvania Capital Bureau reports.

Philadelphia has agreed to pay a $125K fine for not giving incarcerated people enough time out of their cells, WHYY-FM reports.
The Pittsburgh school board has voted down an attempt to expand the ban on suspensions for students in the early grades, WESA-FM reports.
GoErie gives readers a final look inside the historic Girard Hotel, which is destined for the wrecking ball (paywall).
The state Senate has finally granted confirmation to the state education and labor secretaries, PoliticsPA reports.
Swimming in federal cash, states are investing in their crowded parks, Stateline.org reports.
A bipartisan infrastructure ‘framework’ is headed to the White House, Roll Call reports.

You Say It’s Your Birthday Dept
Best wishes go out this morning to Sean Adams, of PennLive, who completes another trip around the sun. Congratulations, sir.

Heavy Rotation
Here, arguably, is the greatest 5:02 that The Killers have ever committed to tape. From their debut LP, ‘Hot Fuss,’ it’s ‘All These Things That I’ve Done.’

Thursday’s Gratuitous Hockey Link
The New York Islanders scored in overtime in Game 6 of their semifinal playoff series with Tampa on Wednesday night, beating the Bolts 3-2, and evening the series in dramatic fashion.

Celebrations by students, volunteers in Greenwich