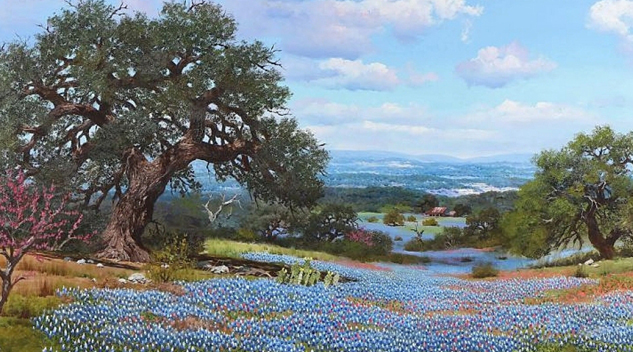 The top lot of the auction was this oil-on-canvas painting by the Texan artist William Slaughter. Wildflower landscapes and pictures of fields with bluebonnets are among the artist’s favorite scenes. This 30 by 40 inch work sold for $ 12,915. Slaughter was a Lutheran pastor who began creating art while on a mission in Mexico. His talents traveled back with him to Dallas, where he spent the rest of his life.

PHILADELPHIA – Four hundred and eighty-seven lots of fine folk and outsider art were titled the November 23 sale of Material Culture, led by a landscape of bluebonnets by Texas self-taught artist William Slaughter. The sale raised $ 332,000, with works collected from 52 mailers.

Notable shipments of sales included works from the collection of Norman Girardot and Diane LaBelle. “Norman Girardot had a personal relationship and wrote the seminal book on Finster: Howard Finster, the Religion and Art of a Stranger from Another World,” said auctioneer George Jevremovic.

All but one of the 28 works that Finster (American, 1916-2001), the visionary Georgia artist, sold came from the Girardot and LaBelle collection. In an article published by the auction house, Girardot wrote that his “world and … academic career as a comparative religious scholar focusing on the mysticism of the ancient Chinese Daoists was forever changed” after meeting Finster in 1985.

This painting by Mary Tillman Smith was sold on board for $ 6,125. It was purchased directly from the artist by the shipper and was 19¼ by 48 inches.

Notable sales in the collection included a $ 7,995 result for Finster’s “Elements Melt / Hell in the Heavens,” a 14 “by 12¼” plate oil numbered “4000,730 Works Since 1976”. The picture, a rather eerie one, shows soul lines enclosed by four figures of Satan. The words “Saten shall be loosened from his chains for a short time on earth” are written near the center. A woodcut-out self-portrait, completed in 1987 by the artist, shows the artist as he appeared as a lively 28-year-old. “Howard in 1944”, measuring 21½ “by 13½”, was used as the cover art for the 2015 edition of Raw Vision and sold for $ 4,480. A 49½ “long” Trumpet Angel “made by the artist fetched $ 4,160, while an 18” long dinosaur cutout sold for $ 1,280. Finster’s pocket sermon, based on the dinosaur, explained his evolutionary denialism and wrote: “Humanity did not come from apes or animals. Man is human, not an animal. “A few rare sinister shapes were found in the collection, including a paint and marker on a 6-inch ceramic jug that raised $ 608. Two other works were painted on glass, including images of faces painted on an Atlas EZ sealed jar mason jar for $ 480 in 1992. and a glass bowl with pictures of women’s faces, $ 384.

Girardot and Labelle also had a large collection of works by the Chicago outsider Mr Imagination (1948-2012). Girardot created a course at Lehigh University entitled “Raw Vision: Creativity and Ecstasy in the Work of Shamans, Mystics and Outsiders”, to which he invited Mr. Imagination as the first artist in residence, which led to an exhibition by Mr. Imagination, Charlie Lucas, Lonnie Holley and Norbert Kox. At this time, Diane LaBelle was running the Banana Factory, Penn’s Community Arts Center, Bethlehem, and also began showing the work of Mr. Imagination as well as other outsiders. The collaboration and vision between Girardot and LaBelle transcended the art world in 2002 when Mr. Imagination appeared as best man at their bottle cap and cummerbund wedding. Mr Imagination’s works for sale included a 20-inch tall self-portrait sculpture in which the artist held a scepter and built it on a bowling pin covered with bottle caps and paint. It sold for $ 3,456. Another figure depicting a black man with a sign reading “Moving Sale” sold for $ 960. Taking $ 544 was an artist’s bottle cap.

The main breadwinner of the sale was a rural scene with Texas bluebonnets flowing through a field overlooking a long valley overlooking the self-taught artist William Slaughter (1923-2003) entitled “Splendid Seclusion”. It sold for $ 12,915. It originated in Simic Galleries in La Jolla, California, where it was purchased in 1989. The 30×40 oil on canvas depicts one of Slaughter’s most beloved motifs, the colorful Texan wildflowers, which earned him his reputation. 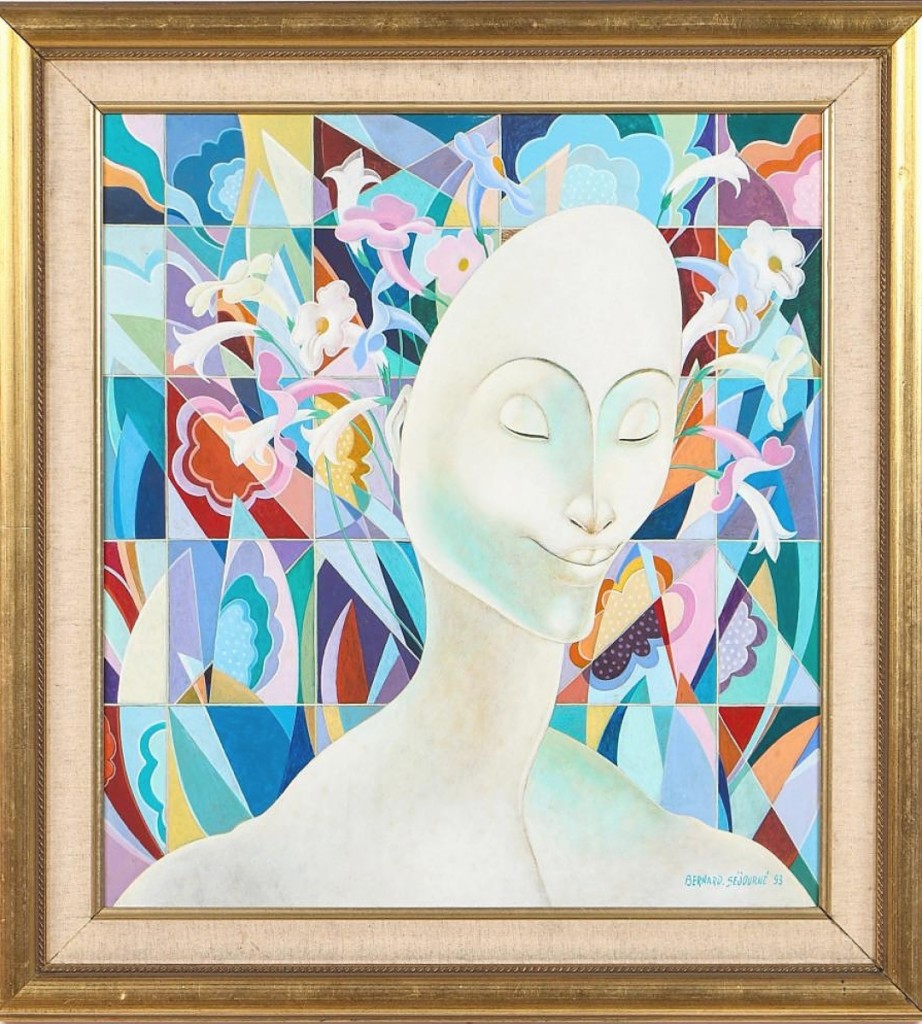 “Haitian art is one area we have excelled in since selling the Jonathan Demme collection of Haitian and self-taught art in two single-owner auctions in 2014 and 2016,” Jevremovic said, referring to the robust selection of Haitian art Art. that included 97 lots on sale. They were led by a result of $ 5,120 for a 1993 oil painting by Bernard Sejourne (Haitian, 1947-1994). Sejourne’s flowing style can feel surreal at times, although his motifs connect him to the Haitiain tradition in portraiture. “The Tree Races”, an oil from 1985 on board, 48 x 40 inches, cost 3,712 US dollars. It shows a picture of three women from shoulder to neck with long necks and bowls of fruit on their heads. Also of interest were works by Jasmin Joseph (Haitian, 1923-2005), whose green landscape rises in the shape of a man riding a camel and sold for $ 4,920. Jasmine is considered a master and was included in the first major exhibition of Haitian art in the USA in 1978 at the Brooklyn Museum.

“We received a large shipment of Martino family paintings from family member and artist Nina Martino, which we sold last year and which we will continue to offer,” said Jevremovic. “The net proceeds from the sale of items in the Martino Collection will be donated to the Pennsylvania Academy of the Fine Arts Student Scholarship Program.” 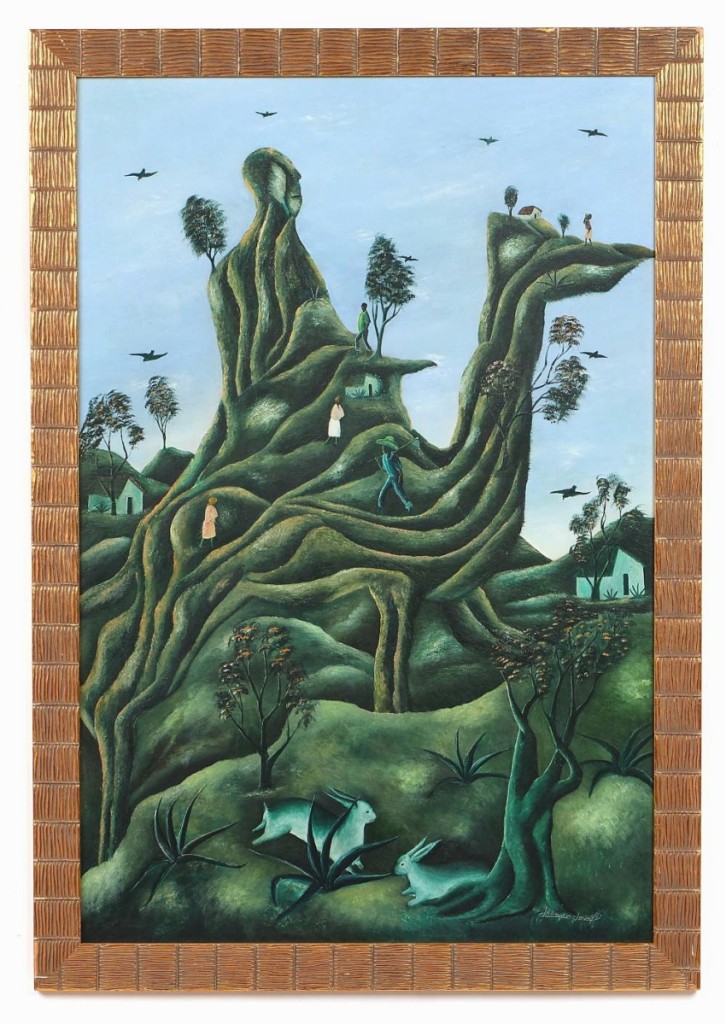 The “Landscape” by the Haitian artist Jasmin Joseph (1923-2005) received US $ 4,920. The oil on board was 35 inches by 23 inches. Joseph is a master of Haitian art who began his career sculpting in a brick factory. After molds for his sculptures were illegally reproduced, he turned to painting.

The auction house had a preview by appointment two days before the sale and the bid was online, over the phone, and in absentia.

All prices include buyer’s premium. For more information, visit www.materialculture.com or 215-849-8030.

Biden’s commitment to climate action a relief, but more needs to be done | Letter