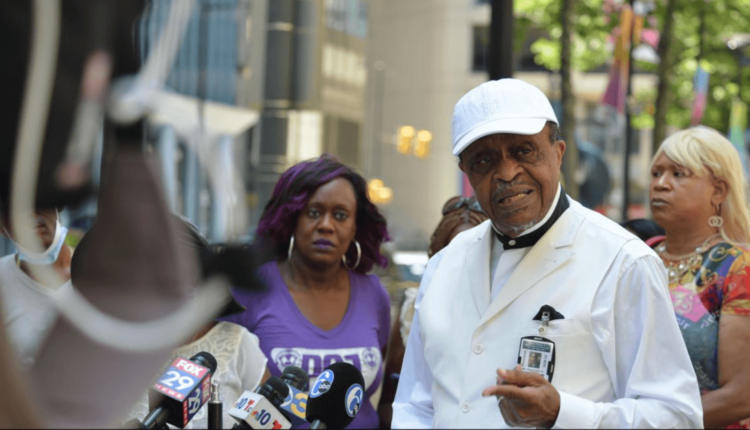 Members of the Black Clergy of Philadelphia and Vicinity are demanding the Kenney administration give the group of dozens of religious leaders a say in how $155 million in anti-violence funding in the city’s $5.2 billion budget is divvied out in the coming fiscal year, which starts Thursday.

The Rev. Robert Collier, president of the Black Clergy, said the city’s investment in violence prevention — which includes $68 million in new and restored funding — “certainly shows some commitment” addressing the pandemic of gun violence.

But Collier noted the group has “never been invited to the table” regarding how the Kenney administration distributes violence prevention funding. Black Philadelphians are overwhelmingly the victims of killings and shootings.

At the same time, District Attorney Larry Krasner joined the Black Clergy in calling on some of the city’s largest businesses — Comcast, Aramark — and nonprofits — the University of Pennsylvania, Drexel University, the Eagles NFL franchise — to help fund the city’s anti-violence efforts.

“This is a public-private initiative,” Krasner said, referring to the city’s effort to reducing gun violence. “We cannot expect the poorest of the 10 largest cities to do it with government alone.”

Members of the Black Clergy and Krasner were among other state and local legislators as well as activists to gather at the Octavius V. Catto statue at City Hall. Notably missing were Mayor Jim Kenney and Police Commissioner Danielle Outlaw.

The Rev. Greg Holston, a Black Clergy member and Krasner adviser, said they did not directly invite either Kenney or Outlaw.

Philadelphia has marked yet another bloody weekend.

Twenty-four people were shot between Friday and Sunday, of which three were slayings, according to the Philadelphia Police Department.

Collier and Holston also doubled down on the Black Clergy’s anti-violence blueprint, which called for $100 million in new funding and a raft of recommendations, which included Kenney appointing a so-called “czar” to direct and manage the city’s gun violence efforts.

The Black Clergy members said Kenney and Outlaw were ultimately responsible for the city’s gun violence.

Councilmember Jamie Gauthier, who represents the 3rd District in West Philadelphia, said officials will set up an oversight committee to keep tabs on how the city will administer the $155 million in violence prevention funding. City contracts will be put out for community organizations to apply for grants.

Gauthier added that she supported the Black Clergy’s demands regarding the anti-violence funding, saying: “We need to have full transparency and the community needs to be at the table as well.”

Kallel Edwards, Philadelphia campaign organizer for the nonprofit CeaseFire Pennsylvania, said the funding for violence prevention amount to a “small win” but many issues remained, including transparency concerns around how the funding will be spent.

Leading up to the passage of the city’s fiscal year 2022 spending plan last week, CeaseFire Pennsylvania called for the city to provide $100 million in grants for community organizations working to reduce violence. The Kenney administration and legislators earmarked $20 million for that purpose.

“Now is the time to celebrate a small win,” Edwards said. “But this was not the win we were looking for.”