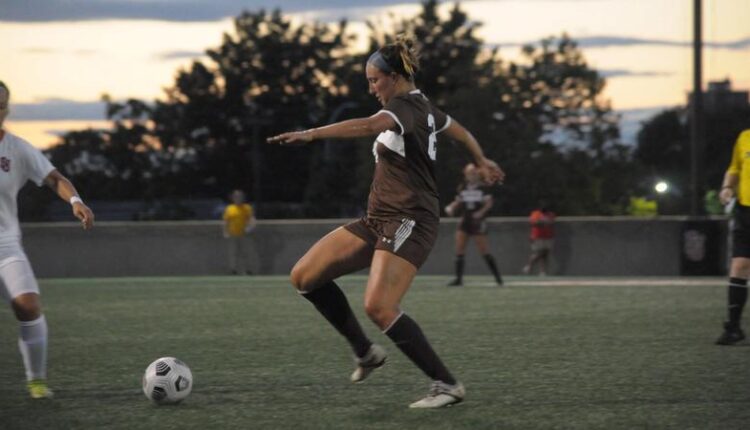 WORCESTER, Mass. – An early goal from senior Ryelle Shuey in the 14th minute sealed the deal for the Mountain Hawks as they picked up their second straight league victory. The Lehigh women’s soccer team defeated Holy Cross 1-0 on Saturday night to improve to 4-4-1 overall and 2-1 in the league.

“In the Patriot League, getting a win on the road is challenging,” said head coach Lauren Calabrese. “We put together a collective team effort against a gritty opponent. I am proud of how our team navigated the game with composure to secure the result.”

The Mountain Hawks opened up the first half with the same strong offensive intensity that was shown on Wednesday against Lafayette. Lehigh put up two shots within the first ten minutes of the game but Holy Cross goalkeeper Olivia Dubin showed no signs of letting the ball get past her.

A Crusaders’ yellow card gave the Mountain Hawks a free kick just outside the 18-yard box. Shuey placed the ball up and over Dubin to score her second-straight goal this season.

Lehigh closed out the first half with two more shots but was unable to find the back of the net. The Mountain Hawks outshot the Crusaders 5-1 in the first half alone.

Within the first five minutes of the second half, Lehigh had shots from juniors Ava Schaller and Emma Roesing. The Holy Cross defense showed no signs of letting up any more goals on its home field.

The Mountain Hawks continued to bring the offensive intensity throughout the second half but were unable to get the ball past Dubin.

In the final minute of play, Holy Cross had the chance to tie the game but first-year Maggie Ousouljoglou made two huge saves to secure Lehigh’s second-straight victory.

Lehigh finished Saturday’s victory with a 9-4 advantage in shots and 7-3 edge in corners.

Lehigh will travel to Boston University on Saturday, Oct. 1 for its fourth league game of the season. Kickoff is scheduled for 1 pm and the game will be streamed on ESPN+.