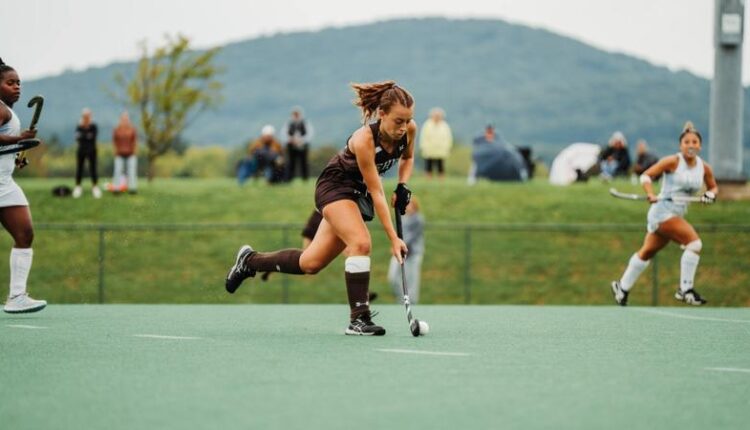 BETHLEHEM, Pa. – Senior Sarah Bonthuis scored 2:30 into overtime to give the Lehigh field hockey team a 1-0 win over LIU Sunday at Ulrich Field. This marked the second straight year that the Mountain Hawks and Sharks needed overtime after a scoreless 60 minutes, but this time, Bonthuis’ team-leading seventh goal of the season delivered Lehigh’s third straight win.

“We came out with a more competitive mindset,” Lehigh head coach Caitlin Dallmeyer said. “We had to make a lot of adjustments in our game plan because (LIU) plays a very different structure than we’ve seen so far this year. We spent some time this morning doing a thorough walk-through to make some adjustments to how we were going to manage them. We executed the game plan really nicely, which gave us a lot of opportunities in front of the net and then we were fortunate to be able to finish it in the end.”

Defense was the theme for both sides through the first 30 minutes as Lehigh and LIU combined for just three shots in the first half, all of which came late in the second quarter. The Mountain Hawks picked things up in the second half, out-shooting the Sharks 9-1 over the second 30 minutes. Lehigh forced Maggie Streichert into two saves in the third quarter, then fired six shots in the fourth, but could not find the back of the cage.

LIU had its best chance late in regulation but Kahn knocked away a shot by Mailen Albertinazzi to keep the game scoreless.

“We have been working on our overall team defense from the forward line all the way back,” Dallmeyer said. “The composure that we need to be able to maintain throughout the game and our 50/50 balls and transitioning quickly. We were able to do all of that with a few reminders and execute throughout the game.”

Lehigh had the only three shots of the overtime period. Bonthuis had a shot saved by Streichert and then junior Julia Gatelein had a shot deflected over the crossbar by Felicia King. The Mountain Hawks were awarded a corner and junior Lotte Smorenburg sent it towards Gatelein, who waited and then played the ball into space, allowing Bonthuis to run in and get a diving touch on the ball, which found its way into the back of the cage to give Lehigh the victory.

“We haven’t been scoring on corners so we made some adjustments,” Dallmeyer said. “We’ve been practicing them a lot. It was very nice to see that we were able to execute that today under a lot of pressure.”

The Mountain Hawks had a 7-1 edge in penalty corners to go along with a 13-3 advantage in shots. Bonthuis led Lehigh with five shots, four of which were on goal.

Lehigh will travel to rival Lafayette Friday night for a 7 pm game that will be broadcast on ESPN+.