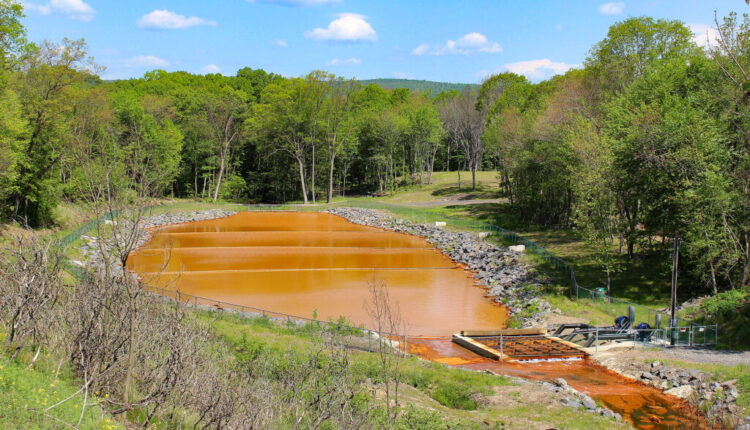 Billions of dollars in federal aid on the way to attack abandoned mine pollution in Pa., elsewhere

The $1.2 trillion Infrastructure Investment and Jobs Act passed by Congress last November is sending an unprecedented $6.4 billion for abandoned mine lands cleanup to Pennsylvania, Maryland, Virginia and West Virginia over the next 15 years.

The record cleanup money will enable a quantum leap in removing the readily visible scars that still harm the environment in the four states.

People such as Ed Wytovich of the Catawissa Creek Restoration Association in Pennsylvania are giddy about the influx of funds.

Catawissa Creek is a 42-mile-long stream that drains into the Susquehanna River in eastern Pennsylvania. It is one of the most picturesque waterways in the state, all but untouched by roads. Its sand and gravel bottom, cobblestones and boulders should make it one of the best wild trout streams in the eastern United States. Sixteen of its tributaries have wild trout.

The stream suffers from high acidity and aluminum pollution draining from a 3-mile tunnel that dewatered coal mines long ago — poison to any fish and aquatic insects that should be there.

“I personally think it’s one of prettiest screwed-up creeks east of the Mississippi,” Wytovich said.

His group, as well as local conservation districts, Trout Unlimited and the state want to build a wetlands– and limestone-based treatment facility to bring back the Catawissa and unlock its potential.

Until now, federal funding has been restricted mainly to projects that pose a threat to public health, safety and property in populated areas, or those that boost economic development. Much of the other acid mine drainage, estimated to have contaminated 7,356 miles of streams in Pennsylvania alone, has taken a back seat. That estimate has risen by 1,797 miles in just the last two years.

But the federal funds from the new infrastructure bill can be spent directly on acid mine drainage, and officials in four Bay watershed states are dusting off plans for hundreds of long-stymied reclamation efforts.

Included is a project to stop the mine drainage into Catawissa Creek.

Biden administration officials say the new money also will be used to reclaim abandoned mine lands, eliminate pollution and spur economic development in those blighted areas, all while creating jobs.

To understand the scale of the increase for the four states’ 45-year effort to erase the blight from past coal mining, consider that Pennsylvania’s estimated share of $3.8 billion — the most in the country — is more than twice the total amount the state has received since annual federal cleanup aid began in 1977 under the Surface Mining Reclamation and Enforcement Act.

“It’s an unprecedented level of funding,” said Brian Bradley, director of the Bureau of Abandoned Mine Reclamation at the Pennsylvania Department of Environmental Protection. “We’re looking at all angles. We’re looking at how we can do more projects, bigger projects, and looking at problems we have set aside previously because they were thought to be too costly. Everything is fair game.”

“Our community was stunned and thrilled at this windfall,” added Andy McAllister, head of the Western Pennsylvania Coalition for Abandoned Mine Reclamation, an environmental group that has partnered with both the state and nonprofit organizations to clean up legacy coal problems.

In Maryland, which will receive nearly $75 million, the Department of the Environment is lining up new projects and adding staff to hit the ground running, said department spokesman Jay Apperson.

Maryland, with an estimated 450 miles of streams impaired by acid mine drainage, has a list of unfunded coal reclamation projects that total $69.6 million. With nearly $75 million coming in new federal aid, it would appear that the state could eliminate its legacy coal pollution, but Apperson said it’s not quite that simple.

Each year, he said, the agency also has to fix landslides, mine subsidence and other pop-up problems that aren’t on the official abandoned mine land list. Still, he added, “It’s safe to say the money will be sufficient to reclaim the majority of the sites.”

Maryland’s coal lands are exclusively in the state’s two westernmost counties — Allegheny and Garrett. A majority of high-priority projects are in the Chesapeake Bay watershed.

Virginia will get $354 million, and its Department of Energy has prepared for the surge by beefing up staff capacity. But none of its unfunded inventory of $425 million in projects is in the Chesapeake Bay watershed.

West Virginia, where 14% of the land mass drains into the Bay through the Potomac and James River basins, will get $2.2 billion.

The new infusion of federal money is in addition to funds the states have been getting since 1977 from fees collected from present-day coal mining companies. The Abandoned Mine Land Trust Fund has distributed nearly $12 billion to states around the nation. The fund expired last fall, but it was renewed in the infrastructure bill with a 20% reduction in the fees, a concession to the struggling coal industry.

Broader use of funds

Cleanup advocates are not just excited about the record amount of aid about to be spent on legacy coal mining problems. They are also pleased that the funds have fewer strings attached so that a wider array of problems can be addressed.

Most importantly, the money is available for projects aimed solely at bringing impaired streams back to life, not just for public health and safety issues such as water supply remediation, removal of old coal slag piles or stabilizing abandoned “highwall” mines.

Now, instead of only “chasing landslides,” as one environmental group characterized efforts to date, the federal money can go toward reviving dead or so-called “yellow-boy” streams — dramatically discolored by contaminants — with the sole purpose of restoring their ecosystems. And, in the process, they can bring back fishing and recreational opportunities, too.

Fisheries and game managers from Bay drainage states recently wrote to the U.S. Department of the Interior, which will manage the new funds, urging that uses for the money be liberalized to allow more polluted streams to be restored. Interior Secretary Deb Haaland announced she was granting that request at a press conference in Pennsylvania on Jan. 24.

“We need to make sure those funds are broadened,” said Mike Nerozzi of the Pennsylvania Fish and Boat Commission. “Oftentimes, these sites extend miles downstream and decimate everything in their path.” He cited Catawissa Creek as a prime example.

The agency estimates that if the tainted streams were again fishable, it could create $29 million annually in angler-generated revenue.

U.S. Sen. Bob Casey, D-Pa., promised that he “will continue pressing for more flexibility to use abandoned mine land funding to ensure Pennsylvania families have access to clean water, a right guaranteed by the Pennsylvania Constitution.”

Another priority for state environmental agencies and advocacy groups is that new aid money be used to support the hundreds of aging acid mine drainage treatment systems that have been built but need rehabilitation or maintenance. Often, they are operated by volunteer watershed groups, conservation districts or municipalities with uncertain funding sources.

In Pennsylvania alone, there are 350 “passive” treatment systems for acid mine drainage that rely on wetlands and settling ponds to filter out harmful metals, in addition to infusing limestone to lower acidity. But larger-scale treatment facilities, similar to wastewater treatment plants, will be needed to fix high-volume mine discharges.

Haaland said the money could be used for such treatment plants, as well as to maintain and refurbish them as they age.

The Medicaid benefits for many, including in the Lehigh Valley, could end sometime this year – The Morning Call