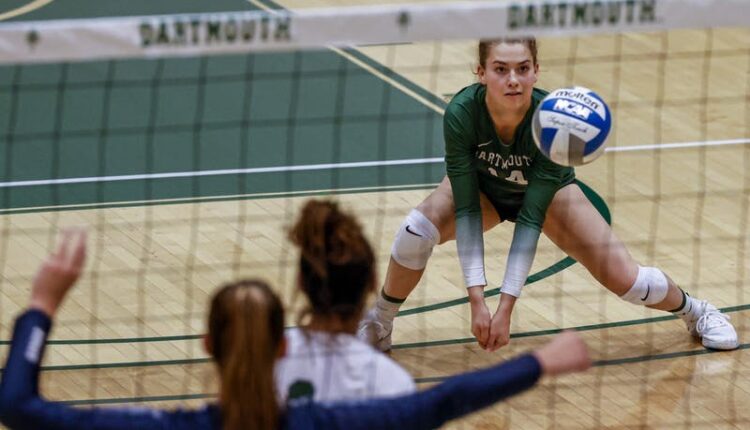 Women’s volleyball off to a winning start

The team won the Dartmouth Invitational for the first time since 2015 on September 9-10.

The women’s volleyball team started strong with 8: 1 after their return to the competition. The Big Green opened their season with the Lehigh Steel Tournament in Bethlehem, Pennsylvania. They secured victories over SUNY Binghamton (3-0), Lehigh University (3-2) and St. Francis College (3-1).

The team continued its swing, hosting the annual Dartmouth Invitational on September 9-10, which competed against the University of New Hampshire, the College of the Holy Cross and the University of Connecticut. The big green secured itself 3: 1 against all three opponents in close matches. The invitation success was the first time since 2015 that the Big Green won the tournament.

After the tournament, rookie Emma Engstrom ’25 was named All-Tournament and Tournament MVP and Ivy League Rookie of the Week. Her performance at the Dartmouth Invitational ended with a total of 15 assists and an impressive 65 digs.

Last weekend, the team traveled to the Hartford Invitational in West Hartford, Connecticut to complete the tournament game for the season. The Big Green won against Hartford (3-1) and Central Connecticut State (3-2). However, they suffered their first loss of the 2021 season to Sacred Heart (1-3).

The team’s successful start to the season follows after a poor year in the Ivy League. In the 2020-2021 school year, all sporting competitions within the conference have been suspended and the Big Green is looking forward to getting back into the game.

“We really appreciate having the chance to be with the team in the gym and on the pitch every day,” said volleyball head coach Gilad Doron. “So far it’s been a really good experience to have the players back in the gym and have fun and enjoy being together and competing.”

Despite the break, Doron found that the time the team had to think and prepare has served them well so far this season.

“Although we weren’t allowed to be together during COVID, we did a lot of team building and team bonding and talked about the ‘why’: why we’re here, why we train, why we get better,” he said.

The team’s players also reiterated how excited the entire team was to be back on the pitch after a year-long hiatus.

“We definitely feel like we missed last season so it’s all the more exciting to play again now,” said team captain Emma Moffet ’22. “We basically also have two new freshmen classes and a completely new team. It was fun to go back to the gym and take part in competitions. “

With two new classes of players starting their sporting careers at Big Green, it feels like this season is a fresh start for the team. Talented young players like Engstrom join seasoned upper-class players eager to get back into the competition.

“We have both newbies and sophomores on the team like Karen Murphy and Ellie Blain – these are players who came in a very motivated freshmen class,” said Doran. “We also have returning players like Makenzie Arent ’23 and [Moffet] doing well. The second class came very well prepared and in good shape. “

Aside from the addition of new players, the team building opportunity last year and the current preseason has only contributed to the team’s current success.

“Our team is also very close to the pitch. We all know each other really well and somehow do it for each other. Overall, we just really care about each other and want to win together, ”said Moffet.

With only one loss to Sacred Heart on their balance sheet, the Big Green are looking forward to further successes this season. The team has a full schedule of Ivy League conference games for the coming weeks, starting with a showdown against Harvard University this Friday. As the new players continue to gain a foothold, the team has high hopes for the rest of the season.

“One of our goals is to be the best defensive team in the league and just have a defensive attitude and go for every ball,” said Doran. “It’s hard to score when you don’t have a correlation with 10 new players on the field. So our goal is to measure ourselves against ourselves every day and hopefully get better and better. “

Second year captain Karen Murphy ’24 confirmed the team’s anticipation for the remainder of the volleyball season after her impressive record.

“I think the main goal is to keep going. It’s definitely the best start we’ve ever had. We hadn’t won our invitation for a long time. We still have high expectations, but we are not trying to overlook any of our opponents. “

I Got a ‘Mild’ Breakthrough Case. Here’s What I Wish I’d Known.