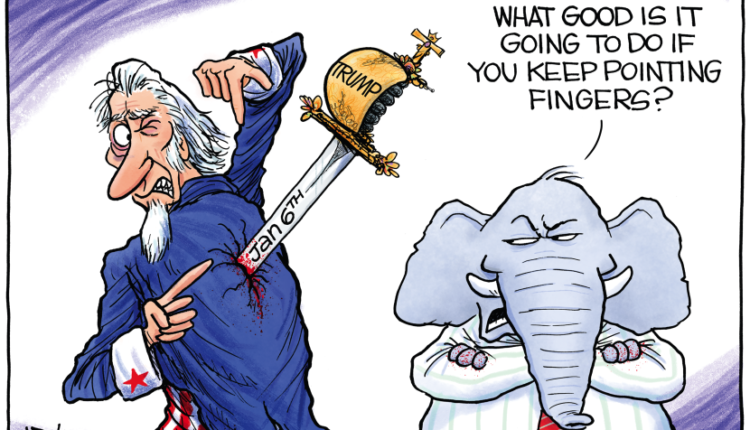 What a shame that so many prominent figures summon the moxie to speak the truth when it’s too late to do anything about it.

So it went the other day when George W. Bush used his 9/11 anniversary address to rightly denounce Trump’s insurrectionists as the domestic equivalent of foreign jihadists.

“(W)e have seen growing evidence that the dangers to our country can come not only across borders but from violence that gathers within,” Bush said at the Flight 93 National Memorial in Pennsylvania. “There’s little cultural overlap between violent extremists abroad and violent extremists at home. But in their disdain for pluralism, in their disregard of human life, in their determination to defile national symbols, they are children of the same foul spirit, and it is our continuing duty to confront them.”

Dubya got that right. In the two decades since 9/11, more Americans have been killed by right-wing domestic terrorists than by swarthy foreigners with purportedly funny names. Looking ahead, our top law enforcement officials have identified white supremacists as the biggest threat of all. Indeed, Bush said in an interview six months ago that the children of foul spirit who stormed the U.S. Capitol on Jan. 6 made him “sick to his stomach.”

But alas, Bush’s wise words this past weekend won’t amount to a hill of beans in his crazy party, because it left him behind years ago.

I’m not here to whitewash Bush’s track record – he and his henchmen relentlessly stoked polarization after 9/11, equating dissent with aiding the terrorists (in 2002 they even said that Democratic Sen. Max Cleland, a vet who left his limbs in ‘Nam, was somehow a stooge for Osama bin Laden) – but by the GOP’s current standards, Bush was a Mother Theresa who welcomed immigrants of color to these shores. Plus, he warned way back in 2005 that “If we wait for a pandemic to appear, it will be too late for prepare,” which is the reverse of today’s death cult party, which seems bent on killing as many people as possible.

Republicans have lost the popular vote in seven of the last eight presidential elections – with the sole exception of Bush in 2004. So it would be nice if Republicans and rabid rightists heeded his call to “confront” home-grown terrorists, to view it as their “duty.”

The problem is, Republicans tore down the House of Bush in 2016 when Trump terminated Jeb with extreme prejudice. Old-school “establishment” conservatism was push out of the party, replaced by populist demagoguery and Putin groupie worship. It has only metastasized since.

If George W. had stepped up in 2016 to save his party from MAGA insanity, perhaps he could’ve helped stem the toxic tide, but we’ll never know. Bush, whatever his many flaws, is at least a gentleman, but in the current iteration of the GOP, there’s no room for gentlemen. As the latest national poll points out, 63 percent of Republicans still believe that Trump should be the party’s leader.

So kudos to Bush for calling out Trump’s goons as terrorists who defile democracy, but at this point Trump’s cultists don’t care a whit about democracy. They’re already poised to dismiss all future Democratic victories as “election fraud,” starting with a Gavin Newsom victory in Tuesday’s California gubernatorial recall.

They’ve also been eviscerating Bush. A spokesman for radio host Alex Jones wrote, “Bush is part of the same globalist coven that supports BLM and Antifa … I don’t liken myself to extremists abroad but if Bush’s definition of ‘a child of foul spirit’ is someone who hates collectivism and refuses to get vaccinated, then yes, I am proudly a ‘child of foul spirit.’”

Refuses to get vaccinated … Don’t get me started.

Texas-based radio host Jesse Kelly was a tad more scatalogical: “George Bush has been a skid mark on this nation for some time. And remains so.”

When you look at what’s happened to the conservative movement, Bush now seems as antiquated as a videocassette recorder. Indeed, when he confidently predicted back in March that Trumpism would “begin to fritter over time,” and that he’s “optimistic about democracy,” I suspected that history had already erased the tape.

‘An Arm and a Leg’: They Turned Grief Into Action