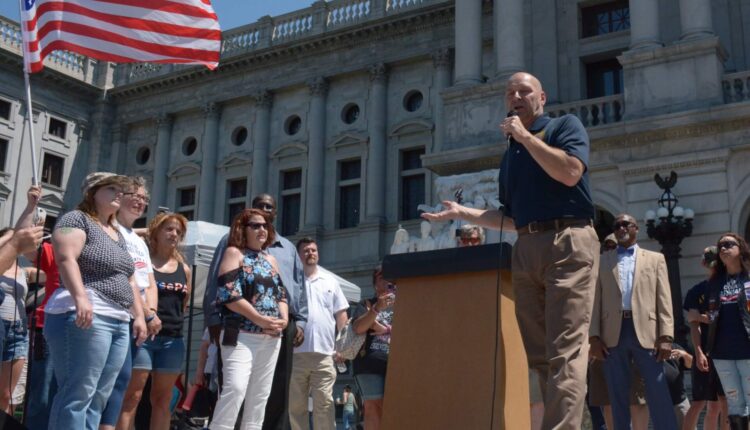 He said it was a way to restore trust in elections following the 2020 election — an election that Trump and Mastriano tried for months to delegitimize with baseless claims of fraud.

“The case for a forensic investigation of the 2020 general election is evident to any unbiased observer,” Mastriano said.

For clarity’s sake, here’s everything you need to know about what Mastriano is proposing:

Mastriano said the counties show he is attempting an even-handed fact-finding mission because the targeted counties represent varying geographic and political leanings.

In a Wednesday radio interview with conservative host John Fredericks, Mastriano hinted that he might request material from more countries in the future.

“This is round one,” Mastriano said. “I have other counties that want to be looked at as well, so we might do another round two.”

The letter asked for items from 45 separate bullet points, likely amounting to hundreds of thousands of pieces of evidence.

Counties have until July 31 to give Mastriano a plan to provide all of this to him, or he threatened to issue subpoenas.

Mastriano’s request will likely result in the three targeted counties handing over hundreds of thousands of documents, plus thousands of pieces of voting equipment.

The three counties contacted for information did not say if they will voluntarily share the requested materials Wednesday, and none offered an update as of Friday. They also have ample reason to be wary.

According to the Philadelphia Inquirer, if counties hand over the equipment Mastriano requested, they might not get it back in time to prepare for the 2021 general election this November.

Counties also run the risk of having to pay millions of dollars to replace equipment if it’s handled by someone without the proper training, according to the Inquirer. Equipment in that scenario would be decertified for use.

In fact, Gov. Tom Wolf’s acting secretary of state, Veronica Degraffenreid, issued a directive on Friday that prohibits third-party access to electronic voting machines. She said that such access “undermines the chain of custody requirements and strict access limitations” to prevent tampering with the systems.

The directive, which has no definitive expiration date, prohibits counties from providing physical, electronic, or internal access to third parties. If access is granted, those machines will be deemed insecure and lose certification from the Department of State.

In Arizona, where a similar audit is wrapping up, the audited county is buying new voting machines and had to pay off the remaining lease. And in Fulton County, Pa., the county also had to pay $25,000 to buy new machines after Mastriano encouraged the small, rural county to audit its election earlier this year.

What’s the deal with the subpoenas?

Subpoenas are legally binding requests for information that are typically issued by a court during an investigation.

But legislative bodies also have the ability to issue them. In the Pennsylvania Senate, they can be issued by any committee chairperson with a majority vote of the committee. That’ll require the vote of six of the 10 senators on Mastriano’s Intergovernmental Operations Committee.

But legislative subpoenas are rare, former Senate staffers told the Capital-Star, especially when it comes to a request as broad as Mastriano’s. Typically, subpoenas have only been used to force a response from the executive branch.

We can see an example of that last year, in April 2020, when a Senate committee sought information on Gov. Tom Wolf’s pandemic response.

The administration did not immediately comply, and the two went to court. However, the case was dropped by July.

“The administration worked cooperatively with the Senate to address their concerns without the need for court intervention,” a Wolf spokesperson said in an email.

Democratic state Attorney General Josh Shapiro also said that try if the Senate approves subpoenas, “you can expect our office to do everything to protect the Commonwealth, its voters and the free, fair election that was held in Pennsylvania.”

Can the Senate do this?

Mastriano’s requests for information might not be greeted with as much of a cooperative spirit, given many state officials’ public comments.

There also will be an institutional debate as to whether Mastriano can, by Senate rule or custom, use the obscure committee he chairs to run a legislative election review. It has in the past focused on regulatory matters, not election oversight.

In a letter they sent to the counties on Thursday, Senate Democrats said election oversight is outside the authority of the Senate Intergovernmental Operations Committee.

But Bruce Ledewitz, Duquesne University Law School professor, said that he didn’t see state or federal courts rejecting the subpoenas if approved, no matter the legal fight put up against Mastriano.

The state constitution grants legislators the right to investigate, and means Mastriano is likely within his rights as a legislator to request the documents.

“It’s a very broad power. It’s very common in our legislative system,” Ledewitz, who also is a Capital-Star opinion contributor, said. “As long as a member complies with the rules, it is very unlikely that any state court would have a problem with it.”

Haven’t there already been audits?

As required by law, counties conducted post-election audits of a sample of ballots, and “risk-limiting” audits were conducted in 63 of the state’s 67 counties. There has been no evidence of widespread voter fraud in Pennsylvania’s elections.

Who’ll pay for this?

During interviews with right-wing media outlets, Mastriano has said the GOP-backed audit in Arizona, which was paid for, at least in part, by the taxpayers, should serve as the model in Pennsylvania.

In Arizona, Senate Republicans contributed $150,000 in taxpayer money to help pay for the operation, but lawmakers and Cyber Ninjas — the prime contractor — won’t disclose how much the audit costs or where the rest of the funds are coming from.

Former Trump lawyer Sidney Powell contracted a company that helped conduct the audit, according to records obtained by the Arizona Mirror, a sibling site of the Capital-Star. However, the company has left the audit team.

Mastriano also led a private briefing with state senators last week to discuss his plans for a similar process in Pennsylvania, according to the Associated Press.

What are Mastriano’s GOP colleagues saying?

The Capital-Star reached out to all 28 members of the Senate GOP to ask if they support the investigation and how to pay for it.

Through a spokesperson, Argall, the chairman of the Senate State Government Committee, which has oversight of election issues, said he is “very supportive” of Mastriano and his efforts to review the 2020 general and 2021 primary elections in Pennsylvania. He added that he sees the “forensic audit as a critical first step in restoring people’s faith in our election process.”

Gebhard, who was elected in a special election in May, said that one of the biggest concerns he’s heard from constituents has been “an overall lack of faith in our electoral system.” He added that the committee should explore “all the avenues of funding.”

“As the Senate Intergovernmental Affairs Committee begins its review of the previous two elections, I am excited for the opportunities this will provide to deliver clarity, transparency, and help restore faith in our elections,” Gebhard said.

Flemington Residents Graduate From College, are Honored for Achievement – TAPinto.net

‘We have two options: Do something or do nothing’: New app connects conflict resolution volunteers to those in need