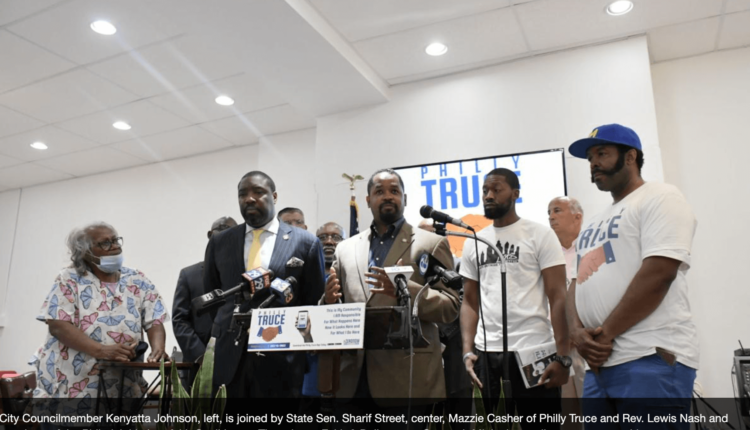 ‘We have two options: Do something or do nothing’: New app connects conflict resolution volunteers to those in need

PHILADELPHIA — Got a conflict in need of resolution? There’s an app for that.

Philly Truce, a phone app that launched in May, is angling to become the Uber of conflict resolution by offering a safe space for volunteer community mediators to connect with those seeking assistance.

“We do still have to meet [young people] where they are, and where we are is in the digital space,” Street, D-3rd District, said.

Mazzie Casher, a recording artist and playwright, said he started the app with Philadelphia firefighter Steve Pickens because he felt responsible to help his community, which is suffering from historic levels of gun violence.

Casher, 46, cautioned the app is not an emergency response service. Rather, the goal is to settle conflicts before they escalate to violence.

The app also is an alternative to interacting with Philadelphia police officers, whom many African Americans don’t trust.

“At the end of the day, we have two options: Do something or do nothing,” said Casher, a city native who lives in the Germantown section.

“We already know that the police are out of the question. It will take hundreds of years before Black people in America can trust the police.”

“Nine-times-out-of-10, the shootings start over something that can just be resolved by having a conversation,” Johnson said during a news conference Thursday at Faith & Deliverance Outreach Ministries in North Philadelphia.

The app offers users two choices: “Get Help” or “Mediator.” Those looking for conflict resolution assistance can describe their issues in the app and input a limited amount of personal information, including how they can be contacted.

Volunteers aim to connect with those who submit a request for help as soon as possible to assess their situation and can help connect them to additional services.

Prospective mediators can sign up through the app, where they can eventually get access to real-time alerts and a queue of those seeking help.

Mediators must complete a training session, which spans a couple of hours over a few weekends.

The first training class was in March, with women accounting for the bulk of those who attended. Twenty-two people completed the training out of the 160 people who signed up. The training attracted some who are professionals with counseling experience.

Casher said he was surprised, saddened and a bit ashamed that more men did not attend the first training.

“Don’t get me wrong: Help is help and we appreciate it,” he said, “but we really need guys to relate to these young guys.”

So far, Casher said volunteers have helped mediate a conflict between two 16-year-olds over the Fourth of July weekend, one of whom had access to a gun.

Philadelphia Interfaith Coalition has partnered with Philly Truce volunteers to offer its members’ houses of worship as safe spaces to conduct mediations.

Newis Nash Sr., a pastor and co-founder of the coalition, said he hoped the relationship would help reduce gun violence in the city. He is the senior pastor of Faith & Deliverance Outreach Ministries.

“We’d rather have a solution to this desperate time of confusion, so we believe if you have a truce, you won’t have to have a funeral,” Nash said.

With merger vote looming: Do we want universities that help us remember and reimagine Pa.? | Opinion