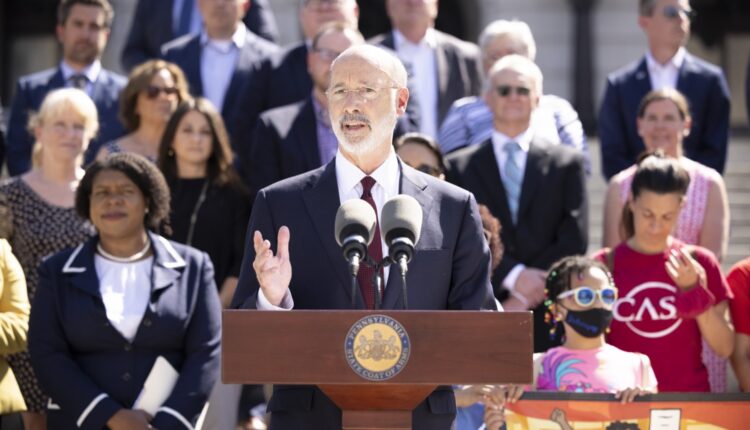 Governor Tom Wolf joined legislative leaders and education stakeholders at the state Capitol today to celebrate the largest state funding increase for public school students in Pennsylvania history and the groundbreaking funding in the new Level Up initiative to provide an additional $100 million to the 100 lowest wealth school districts.

Pennsylvania K-12 schools received another record allocation as part of the $40.8 billion state budget for 2021-22 that was signed into law on Wednesday. And while Gov. Tom Wolf — who campaigned on education reform — says it’s cause for celebration, there’s still unfinished work.

“We still have a long way to go before education in Pennsylvania is fully and fairly funded,” the Democratic governor said during a Wednesday press conference on the Capitol steps. “Adequate and fair funding, we don’t have that yet — even with this good budget.”

As part of the budget, which was negotiated behind closed doors, there will be a $200 million increase in state funds that are put through the Fair Funding Formula, which was established in 2016 and directs money to schools based on enrollment, student poverty percentage, and household income.

In February, Wolf proposed a $1.3 billion investment in schools but told reporters that the compromise was worth it and serves as a step toward addressing inequities among schools.

Proud of the progress we’ve made in this year’s budget.

Thank you to everyone who worked to make our children’s future a priority again for Pennsylvania. pic.twitter.com/II4ddtowKF

“We’re still in the game,” he said. “We still have the ball, but I don’t think anybody — including me — has said that this is where we want to be. It’s a step.”

The Pennsylvania State Education Association, the state’s largest teachers union, said it was pleased Wolf and the GOP-controlled Legislature prioritized education as part of the budget.

“Pennsylvania’s public schools have faced unprecedented challenges over the past year, and educators have worked extremely hard to keep students on track with their learning during the COVID-19 pandemic,” Chris Lilienthal, a PSEA spokesperson, told the Capital-Star.

But the union representing teachers from the commonwealth’s two largest cities had a far dimmer view of the budget.

The Pennsylvania chapter of the American Federation of Teachers, which represents 57 affiliates throughout the state, said the budget reflects “the status quo of inequitable funding for Pennsylvania schools.”

Thank you to all those who voted NO on SB381 tonight. The school code, like budgets, are reflections of our priorities. This bill prioritized the status quo of inequitable funding for PA schools. It prioritized corporate tax breaks. It prioritized a wild west of charter laws. 1/?

“This spending plan represents not just a colossal, missed opportunity to invest in the future of our commonwealth, but erodes worker protections and the programs that benefit the most vulnerable among us,” AFT said in a statement.

The union added that “this budget prioritizes all the wrong things: the status quo of inequitable funding for Pennsylvania schools; corporate tax breaks; a wild west of charter school regulations.”