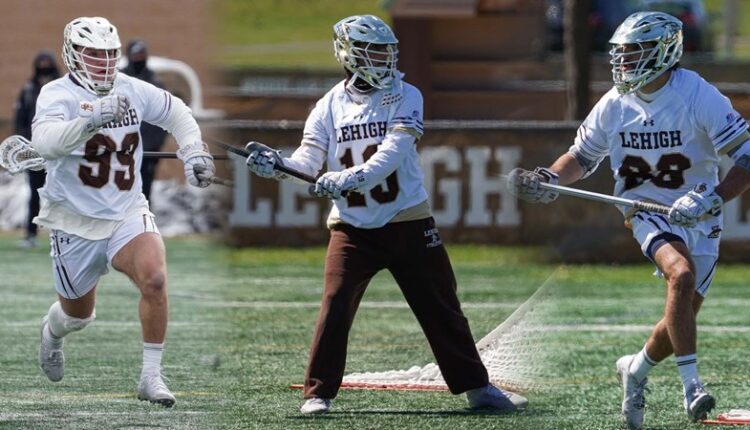 BETHLEHEM, PA. – Inside Lacrosse announced its midseason All-Americans Thursday night, which featured a trio of Lehigh men’s lacrosse stars. Junior faceoff specialist Mike Sisselberger was named to the first team, senior goalkeeper James Spence to the second team and junior defender Anthony Tangredi to the third team. These three were a staple of the Mountain Hawks’ 5-0 record as one of only four undefeated teams in the nation to start over the weekend. The mid-season All-Americans were elected by media representatives.

Sisselberger leads the country with 77.6 percent after winning 90 out of 116 with 60 groundballs. His 12.20 groundballs per competition are also number 1 nationally. Sisselberger is two-time Patriot League faceoff specialist of the week, who has not lost more than seven faceoffs in any game (even if he has completed at least 19 faceoffs in all five competitions) . In the last two weeks Sisselberger won 19 out of 25 games with 15 groundballs in Colgate, then 23 out of 27 with 14 groundballs against Army West Point. He has also scored three goals in the season.

Spence ranks fourth in percent nationally (61.1) and fifth in goals against average (7.80). In the second game of the season, Spence scored a career high of 17 parades with a 10-6 win over Loyola No. 10, which allowed only six goals. This earned him the “Patriot League Goalie of the Week” award. He followed with a performance of 16 saves that allowed only six goals at Bucknell. Last time, Spence scored 10 saves, including two clutch stops in the last minute of a one-goal game to secure Lehigh’s 13-12 win over Army West Point # 7.

Tangredi is an anchor of Lehigh’s eighth goal defense and ranks 6th in the nation in terms of sales per competition. He owns 11 to five games. Included was a career high of seven at Bucknell, only one shy of tying an NCAA record. In the previous game he had three groundballs and three generated sales in defeating Loyola. As a team, the Mountain Hawks have only allowed eight goals per game. Tangredi was named a Post-Season All-American by Inside Lacrosse after the 2020 season shortened by the pandemic.

Lehigh, now ranked 7th on the Inside Lacrosse / Media poll, will be staying home on Saturday to host the # 19 Navy on ESPN + at 4pm.