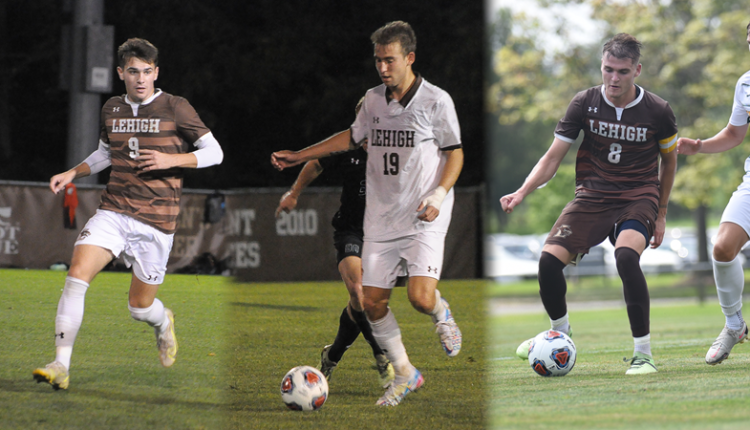 BETHLEHEM, Pa. – Three members of the Lehigh men’s soccer team earned All-Patriot League selections for the 2021 season when the league announced its slate of major awards and all-league honors Friday afternoon, as voted on by the league’s coaches.

For Sarkos, it’s his first time featured on the list while Luchini earns an All-League nod for the third time and Bednarsky becomes Lehigh’s fifth four-time All-Patriot League selection in program history and first since Doug Cusick in 2003.

Sarkos has dominated the league over the last month or so, finishing as the Patriot League’s leader in goals scored with eight, also adding two assists. He scored six goals in his last three games to round out the regular season and seven over his last five. In two years prior, Sarkos had just one goal scored and cemented himself as one of the premier attacking strikers in the Patriot League this season. His 18 points ranked third in the league and he also led the league in game-winning goals with four including four in the final five games of the year.

In what was a rather slow start to the year, Luchini picked things up and had the same sort of mojo from the 2019 campaign to close out the 2021 season, in his final season wearing the Brown and White. He finished the year with five goals and five assists. Luchini scored his last two goals in the same game on Senior Night vs. Boston University, also tallying an assist. He finished second on the team in points (15), first in shots (40) and first in shots on goal (16). He also went 2-for-2 on penalty kick tries on the year. Luchini, a three-time All-Patriot League selection for his career, was a member of the Third Team in 2018, First Team in 2019 and now on the Second Team in 2021.

Injuries played a part in Bednarsky’s fifth and final season at Lehigh, yet he still managed on playing 15 of the Mountain Hawks’ 17 games of the year, making a start in all of them. He tallied two assists (both in the final two games), along with five shots as a key member of the midfield and vital contributor on defense. One of the most outstanding leaders at Lehigh, Bednarsky is a three-time team captain, the fourth in program history.

Coming in as the No. 4 seed, the Mountain Hawks host the Patriot League Quarterfinals on Saturday evening against No. 5 Navy at the Ulrich Sports Complex, as Lehigh begins its quest for a fourth Patriot League title and first since 2019.

Note: Student-athletes are listed by positions; then alphabetically by institution
* Due to a tie, there are two goalkeepers on the second team and none on the third team.