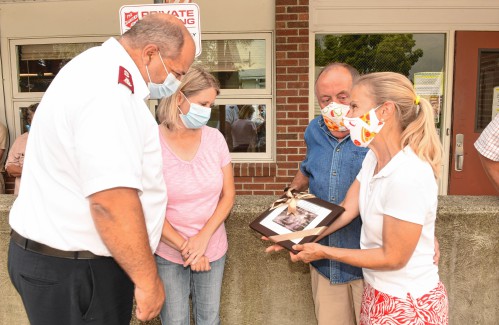 GREENFIELD – When Salvation Army Captain Scott Peabody was transferred to Greenfield five years ago, he looked around the small town and had to remember his hometown of Plaistow, NH

“I find that everyone here cares about their neighbors and shows great love for one another,” he said, pointing to the similarities between the two communities. “It’s a place where your kids can just go out and have fun in a safe environment.”

As Peabody, 51, and his wife Karen, 49, who is also the captain of the Salvation Army’s Greenfield Branch, move on to their next appointment in Bethlehem, Pennsylvania, he is grateful for the relationships they have built in Franklin County and the support they received.

“There are many great memories for me as a ward officer,” said Peabody, noting in particular that two of her three children – Brendon, 24; Joel, 19; and Kylee, 12 – attended greenfield schools, with Joel graduating from Greenfield High School.

The Peabodys, who had previously served in the Salvation Army branches in Chelsea and Pittsfield, were transferred to Greenfield five years ago, replacing Maj. Daniel Brunelle.

On Monday, Lt. Paul Leslie and Lt. Emily will replace Leslie, who will be transferred from the Lowell office. The Peabodys will also begin their new appointment in Pennsylvania on Monday.

“It’s wherever we are needed,” Peabody said as he was transferred between branches of the Salvation Army. “Normal transition periods are usually in July, but these have been extended to August (due to the pandemic).”

During their time out on the grass, the Peabodys – both ministers – have conducted services, supervised the pantry, and served community dinners at 72 Chapman Street.

“We have made some great strides in tackling the greenfield homeless situation,” he said.

Peabody remembers meeting people when they first moved to Greenfield who were homeless but now have safe shelter. He also feels that he and his wife helped raise awareness of the homeless situation.

The Leslies will continue the services already in place like the pantry and meals in the community, Peabody said, but they can also start new programs if they feel the community needs it.

“Each location offers different services depending on the needs of the community,” he said.

Her new appointment will include overseeing some of the same services, Peabody said, but will also include a senior citizens program and transitional shelter for those recovering from a crisis. After 15 years of being officers in the Salvation Army, the Peabodys will hold the title of Major in the Bethlehem, Pennsylvania office. This is her fourth appointment.

While the Peabodys are excited about their next chapter, they also know they’ll miss the place they’ve been home for the past five years.

“It’s always a mix of emotions – the excitement of the adventure into the unknown, but there’s also the sadness of leaving,” Peabody said. “This is part of what we do as officers. The transition is part of it. ”