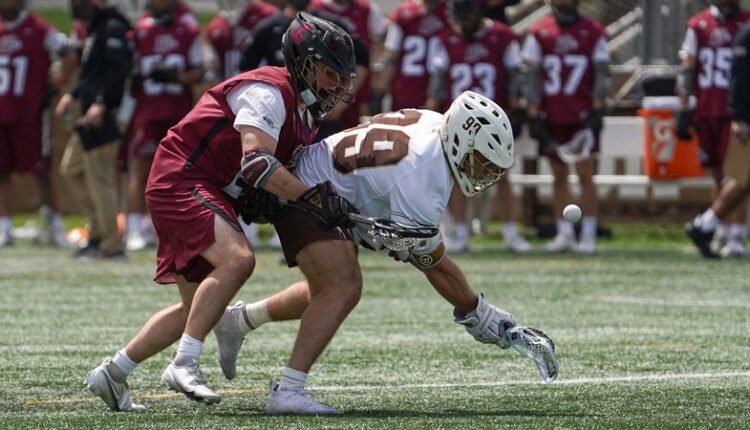 BETHLEHEM, PA. – For the second time in the past three weeks, Mike Sisselberger, the Lehigh men’s lacrosse junior faceoff specialist, has been named to the USILA national team of the week, as announced on Tuesday. Sisselberger had a great weekend against rival Lafayette, winning 44 of 52 encounters with 41 groundballs in two wins. This is the third time a Mountain Hawk has achieved national recognition this season, as Senior James Spence was named to the team after Lehigh’s 6-6 win over Loyola.

On Friday against the Leopards, Sisselberger won 21 out of 25 encounters and amassed a program and a Patriot League record of 20 groundballs (broke the record of 18 set by Loyolas Bailey Savio in 2018). Then Sisselberger broke his own record on Sunday, despite having played less than 48 hours earlier, collecting 21 GB (23 of 27 faceoffs). For the season, Sisselberger has won 79.6 percent of his faceoffs (152 of 191) with 113 groundballs.

The Mountain Hawks in 6th place have reached number 1 in the upcoming Patriot League tournament. Lehigh is 8-0 overall, 7-0 in the league and will finish the regular season game of the Patriot League with Bucknell on Saturday at 12 noon

Hurly, Mountain Hawks Lead ABARTA Collegiate Invitational After Round One