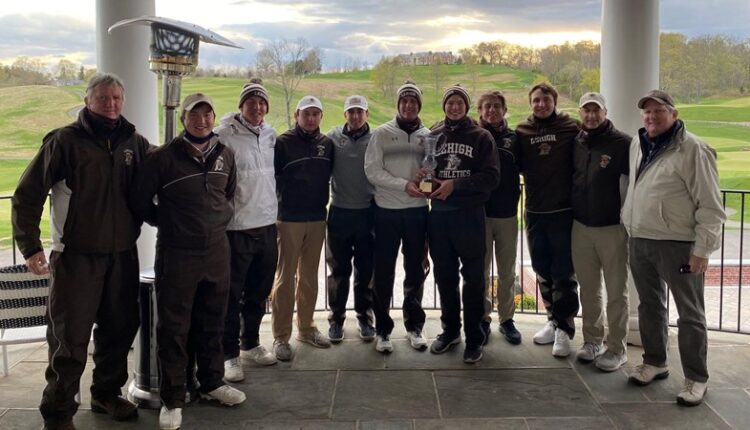 GLADSTONE, NJ – Three days after beating a 12-team field to win Lafayette’s ABARTA Coca-Cola Collegiate Invitational, the men’s Lehigh golf team defeated rivals Leopards in match play to win back the Presidents’ Cup. The Mountain Hawks broke a 3-3 draw by beating the Leopards 5-2 in singles to win the trophy back 8-5 on Thursday at Hamilton Farm Golf Club.

Six of Lehigh’s seven players contributed a point during the doubles matches, and the strong singles standings allowed the Mountain Hawks to level the all-time matchplay series 5-5.

The day started with a better ball game with the Mountain Hawks going 1-2. Newbies Edmund Broderick and AJ Gilpin teamed up in a 2-2 win over Brendan Cronin and Alec Cwienkala. The Leopards demanded an early 2-1 lead in the next two games.

Lehigh dropped the first game in the alternate shot format, but the four high school students in Lehigh’s lineup scored wins to even score the team 3-3. Sophomores David Hurly and Joey Dotta won 2-1 against Martin Vanhaelst and Kaz Osawa, while senior Owen Quinn and sophomore Sam Barton scored a 1-1 win over Ryan Tall and Kaz Osawa.

Gilpin and Drew Steiner cut the first single game in half, and then Lehigh and Lafayette traded wins, with freshman Marco Arosemena defeating Creighton Hendrix 4 & 3 and Lafayette’s Vanhaelst leading Broderick to end the game 4.5-4.5.

Dotta gave Lehigh the final lead with a 1-1 win over Berger and Hurly and Barton, followed by 2 & 1 wins to end the match. Quinn and Tall halved the final single game to get the final lead.

Lehigh will be back on the course on Saturday when the Mountain Hawks travel to Bucknell for a tri-match with Bison and Colgate at Bucknell Golf Club.