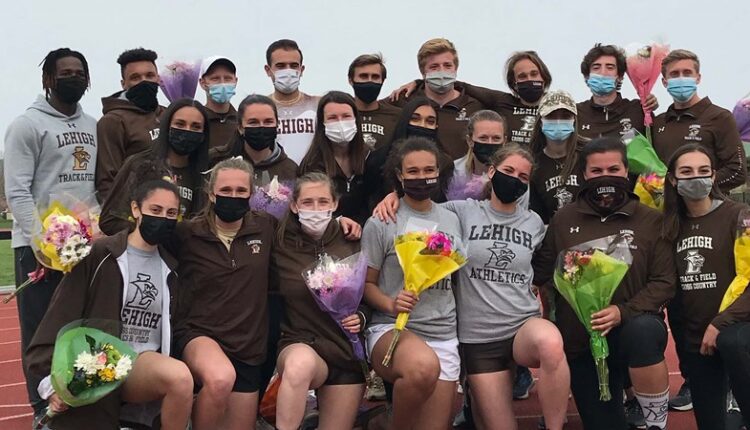 BETHLEHEM, Pennsylvania – On a fine day on the Goodman Track for the Lehigh men’s and women’s athletics teams, the senior class shone at their last home game. After an unpredictable year, the senior class came together to celebrate their careers in front of teammates and limited family members in attendance. The day was highlighted by the seniors across the board, receiving 11 of the team’s 31 PRs.

“Most of the time this year, when we were sure from week to week or really not even from day to day whether we would be allowed on the track, our team showed itself to be really great today,” said head coach Matt Utesch. “31 PRs really tell this story. Our seniors led the way at the Goodman Track and Field Complex on a beautiful day. How fitting that the group of seniors who have weathered so many challenges, including a global pandemic, completes their “home” field careers so dynamically. It’s always an emotional day for me, but this year it’s whole different. We’ve been through a lot with this group and I’m very, very proud of them. “

In the women’s field events, the day started with the javelin throw when Senior Brianna Wanbaugh took home the win with a throw of 39.45 meters. Teammate Karina Roze finished third (38.41 m) and colleague Senior Madison Harding came fourth (37.60 m) to round off a strong Mountain Hawk finish. The impressive performance in the throws was continued by Teasha McKoy, who took home a second place in the shot put with a new PR of 13.19 m. McKoy continued her success and won the discus throw with 42.74 m. Teammates Brittany Curtin and Karina Roze completed the top six, with Curtin in fifth and Roze in sixth. Brittany Curtin made the most of her senior day and won the hammer throw with a new PR of 55.06m. Curtin saved the best for last because her PR came in the final throw of the finals. It was all a smile from the senior citizen who made the most of their last meeting back home.

In the other field competitions, the women showed themselves to be strong in the high jump. The Mountain Hawks took first place, Calista Marzolino took the win for the second week in a row. Marzolino’s jump of 1.65 m corresponds to last week’s height, which connects her PR in the high jump. Carly Carpino and Emily Dolan both had successes in the high jump, with Carpino jumping a new PR of 1.50m while Dolan linked her PR at 1.45m. Lehigh took seven of the eight best places in the high jump, an event that is historically strong for the team. In the long jump, Lehigh was represented by Avery Roze, who finished 4th as the best finisher of the team. Roze scored a PR with a 5.28m jump while Junior Bree Smentkowski jumped a PR of 5.16m. Junior, Carly Roche, was Lehigh’s only competitor in the pole vault and took 5th place with a jump of 3.05 m.

The excitement started at the track where Lehigh took home wins in the first two events. Andrea Miller won the 3,000 m obstacle race and beat the competition from Loyola by almost 36 seconds. Miller missed a PR by less than a second but will be looking for redemption next weekend. In the 4×100, Lehigh finished first with a time of 48.16, with Seniors Brett DeWeese, Lexi Smith and Morgan McConnell along with junior Camari Griffin taking the baton for their fastest time of the season. Representing the Mountain Hawks on the 1500m was Madison Zaun, who achieved a new PR of 4: 54.03 and finished fifth. The seniors continued to shine in the 100m hurdles, with DeWeese setting a season best (14.59) on the way to second, while Madison Harding finished fifth with a new personal best of 14.94. Bree Smentkowski, colleague in the multi-event, rounded off the hurdles with a PR of 16.40. Senior Aisha Kumar ran 400m to a new PR and finished it with a time of 1: 01.66.

Lehigh was very successful in the 800m, scoring four new PRs and taking the top two places. Hetty McMillan was overtaken by Loyola late in the race but she responded well and took the win en route to a PR of 2:16.21. Senior Miranda Royds took advantage of a late climb to race her way into second place and also scored a PR of 2: 17.01. Christina Yakaboski and Emily Dolan drove the two-lap race and achieved PR with times of 2: 20.02 and 2: 23.20 respectively. Kaja Skerlj built on the strong success of the senior class and ran a spectacular race over 400 m hurdles and won by three seconds. For the fourth time this season, Skerlj raced to a new PR when she crossed the finish line in 1: 02.54. Camari Griffin led Lehigh over 200m and finished fourth with a PR of 26.00.

In the longest distance race on the route, the runner-up Eirinn Sikes led the way for Lehigh with a PR of 19: 23.07 over 5000 m. The day was rounded off with an exciting win in the 4×400. After numerous leadership changes during the race, Lexi Smith threw an impressive anchor leg to lead her teammates Aisha Kumar, Morgan McConnell and Kaja Skerlj to victory.

On the men’s side, the seniors stole the show once again. Riley LaRiviere had a career day, set up three PRs, and led the men in three of the four throwing competitions. Riley started his day with a 46.21m throw in the discus. He continued his impressive endeavors with an improvement in the shot put with a mark of 14.85 meters. Riley ended his busy day with an impressive hammer throw of 57.26 m. That grade was good for second place and puts Riley in a great position to go into the Patriot League Championship next weekend. In the javelin throw, John Siani threw a new PR of 37.84 m in the second year, which meant an improvement of three meters for the young decathlete. The competition in the field competitions was rounded off by the runner-up Britt Pierce, who took third place in the high jump with a grade of 1.90 m.

Riley Williamson, who represented the brown and whites, started with a second place in the 3000 meter obstacle race on the track. Next came the 4×100 relay, which ran a season best of 43.23 on its way to victory. Seniors Matt Solomon and Sam Tapera were assisted by Trevor Thenga and Amondo Lemmon for the win. The Mountain Hawks achieved four PRs over 1,500 m, with Senior Michael Mitchell leading the runner-up and running a personal best of 3: 58.75. Kyle Burke completed the top three, finishing just behind Mitchell, while Senior Nick Norton also raced to a PR of 4: 03.94. Sean Campiglia and Tyler French also received PRs as the runner-up finished with times of 4: 06.73 and 4: 07.24. Over the 400m, Amondo Lemmon achieved a personal best of 49.86, good for fourth place overall.

For the first time this season, Senior Matt Solomon laced his spikes. Solomon sprinted his way to the 100m victory with a time of 11:23. The track heated up again when the Lehigh men put on a show over 800 m. Connor Melko showed his range when he finished fourth overall in 1: 52.62, which was almost a personal best of four seconds for the second year. Senior, Sean Brown, crossed the finish line right behind Melko, Jacob Martinez, Joseph Cranley and Jeffrey Kirshenbaum rounded off the first 11 places. Martinez clinched eighth place and a PR of 1: 54.92, while Kirshenbaum crossed the finish line with 1: 56.18 and cracked 2:00 for the first time in his career. Freshman Brian Healy rounded out the PRs for Lehigh after running a new time of 1: 56.83. In the last event on the track for Lehigh, Lemmon returned and led the men over 200m with a team best from third place.

After a long day, the team took a moment to honor the senior class. With 24 seniors in the team, there was a lot of gratitude for sporting opportunities and a lot to celebrate. It was only fitting that the seniors pushed the program forward as they have for four years. In reflecting on the day, some seniors had some thoughts to share.

“Attending our last home game today made me really appreciate my time here at Lehigh. Everyone’s resilience to make it to this meeting and compete hard all season made me proud to represent Lehigh XCTF Was injured for a year and fought like this. It’s hard to get to this point, but I look back on my problems and know that it was the support from my teammates that got me through. “
-Sean Brown

“Today’s get-together was a great way to end our last meeting in Lehigh. Riley LaRiviere’s hammer throw performance stood out the most. I’ve seen him work so hard over the past four years and it’s finally paying off. So many of our seniors have done their PRs and won their events and I couldn’t be more proud of how far they have come. “
-Brittany Curtin

“Today’s meeting was very special for me. My races went well and the weather was great, but what I’ll be carrying around for the rest of my life was how proud I am of my teammates. I’m on the 4×1 season with Lexi Smith, Camari Griffin and Morgan McConnel. I’m lucky enough to star so I can see every girl running after me and it was a great feeling to see every handover went smoothly and Morgan looked great as an anchor. We have run the best one season and are really looking forward to running again with the Patriots. It was such a privilege to be with these girls this season and work together towards a common goal. “
-Board DeWeese

“It’s been a crazy four years and I’m so happy to have finished it at home with my best friends and teammates on a high level. I’m so grateful that everyone stuck together through all the ups and downs, I wanted it differently, I’ll miss it. ‘
-Riley LaRiviere

Next, the Mountain Hawks will travel to Army West Point for the Patriot League Championships. The two-day meeting begins on Friday, the competition ends on Saturday. No spectators are allowed at the meeting.