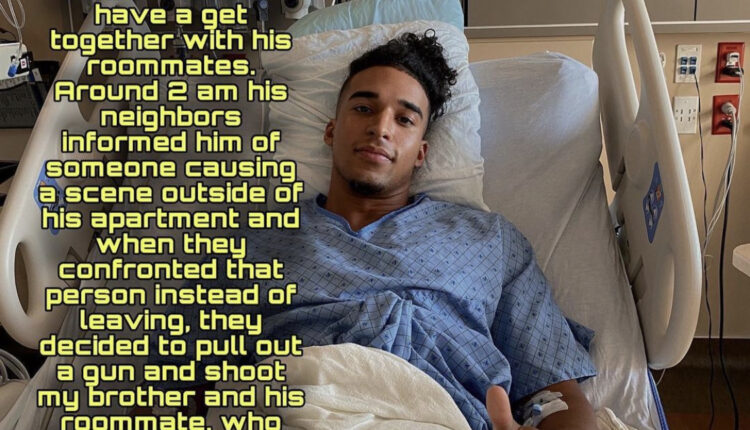 The Orem Police Department responds to a shooting at Axis Luxury Student Living. Two students were shot and are expected to make a full recovery. (Video courtesy of Dejon Brooks)

Until 1998, there was little information on college crime levels. Now, thanks to the Jeanne Clery Act, named after a 19-year-old Lehigh University student who was raped and killed in her dorm room in 1986, colleges and universities are required to report campus crime data, support victims of violence and publicly outline the policies and procedures they have put into place to improve campus safety.

According to a study completed at the University of Virginia about violence on college campuses, “there are often questions about the accuracy and completeness of college crime data, because colleges are motivated to present a favorable image in order to recruit students and attract donors.”

On the morning of Sunday, Nov. 13, four University of Idaho students were fatally stabbed in their shared off-campus home in Moscow, Idaho. Moscow Police Captain Roger Lanier reported no suspects in custody and no weapons found.

The students, Madison Mogen, 21; Kaylee Goncalves, 21; Ethan Chapin, 20 and Xana Kernodle, 20 are the first recorded murder victims in Moscow since 2015. Moscow, a city of 25,763 residents, has been instructed to “stay vigilant,” as Moscow Police Department Chief James Fry cannot confirm the community’s safety at this time.

According to the Moscow Police Department, Two additional roommates were home at the time of the early-morning stabbing, although no 911 call was made until noon later that day. Neither roommate was injured nor held hostage and both are cooperating with law enforcement.

“Detectives do not believe any individual at the residence, when 911 was called, is involved in this crime,” the Department said in a Facebook update.

An email tip line has been provided to the community to help law enforcement with information and, at the time of publication, detectives were working on processing nearly 600 tips.

Additionally, a student suspect Christopher Darnell Jones Jr. was accused of shooting and killing three University of Virginia football players after a school field trip. Players Devin Chandler, Lavel Davis Jr. and D’Sean Perry were on their way to see a play in Washington DC with other UVA students, but when the bus returned to the Charlottesville campus, 22-year-old Jones opened fire on the bus — killing Chandler, Davis and Perry.

Jones faces three charges of second-degree murder and three counts of using a handgun in the commission of a felony, in addition to two counts of malicious wounding — each accompanied by a firearm charge. Two other students, Marlee Morgan and Michael Hollins were injured in the shooting.

Jones remains in custody in the Albemarle-Charlottesville Regional Jail and is being held without bond.

These violent trends continue, even close to home.

On Nov. 15, according to a statement from the University of Utah health department, “an unattended bag was noticed in an area of ​​University of Utah Hospital.” Emergency teams were notified, the Salt Lake Police Department Hazardous Devices Unit was activated, a hospital emergency code was issued and patients were relocated to a more secure location.

At 6:30 pm the University of Utah campus community received an alert notification saying that a few hours earlier, the public safety department “received a report of an abandoned backpack in the first-floor lobby area of ​​the hospital.”

The notification included information about a bomb-sniffing dog who alerted the Salt Lake City Police to potential explosives in the bag.

University of Utah student Devin Fink receives notice of a potential bomb threat near his dorm. An X-Ray device revealed the package was safe and the hospital was given an all-clear. (Photo courtesy of Devin Fink)

An X-ray device revealed the package was safe and the hospital was given an all-clear.

In the same statement, Dan Lundergan, University of Utah Hospitals and Clinics CEO discussed how well the event was handled, despite urgencies.

“I’m relieved this resolved without incident and I’m incredibly grateful to our teams, to our law enforcement partners and to all those involved in supporting our hospital this evening … We continue to prove that we’re at our best during trying times ,” Lundergan said.

University of Utah student Devin Fink lives in the dorms nearest to the hospital where the threat was made.

“I was lucky enough not to be within evacuation range, but it definitely gave me a shock when I first heard it … I knew that being so close, if anything were to happen the dorms would never be the same. I’m really grateful that it was just a scare and nothing dangerous was found,” Fink said.

Fink found the scariest part of the situation to be how close-to-home it hit, especially after the University of Idaho and Virginia incidents.

“It just seems to be happening so often,” he said.

On Nov. 19, the Orem City Police Department responded to a report that two individuals had been shot at Axis Luxury Student Living, an off-campus apartment complex managed by Redstone Residential and close to the Utah Valley University campus. According to the Orem Police Department’s Facebook, “both victims received medical treatment and are expected to make a full recovery.”

The suspect fled the scene and officers are in the process of identification and investigation.

Jake Jarman, who works for Redstone Residential’s cooperate office, said the first victim did not have a penetrative wound — that the bullet hit his cellphone. However, the other victim was shot and is receiving medical care.

“When we spoke with him earlier this morning, he was hoping to be released today from the hospital, obviously in good spirits because he’s doing okay, but not happy to have missed work and other things because of this and not happy to have been shot ,” Jarman said.

Dejon Brooks, Axis resident and face behind Instagram’s @provohub witnessed the aftermath of the shooting. He is using his social media platform to raise awareness to his 10.7k followers of the incident. 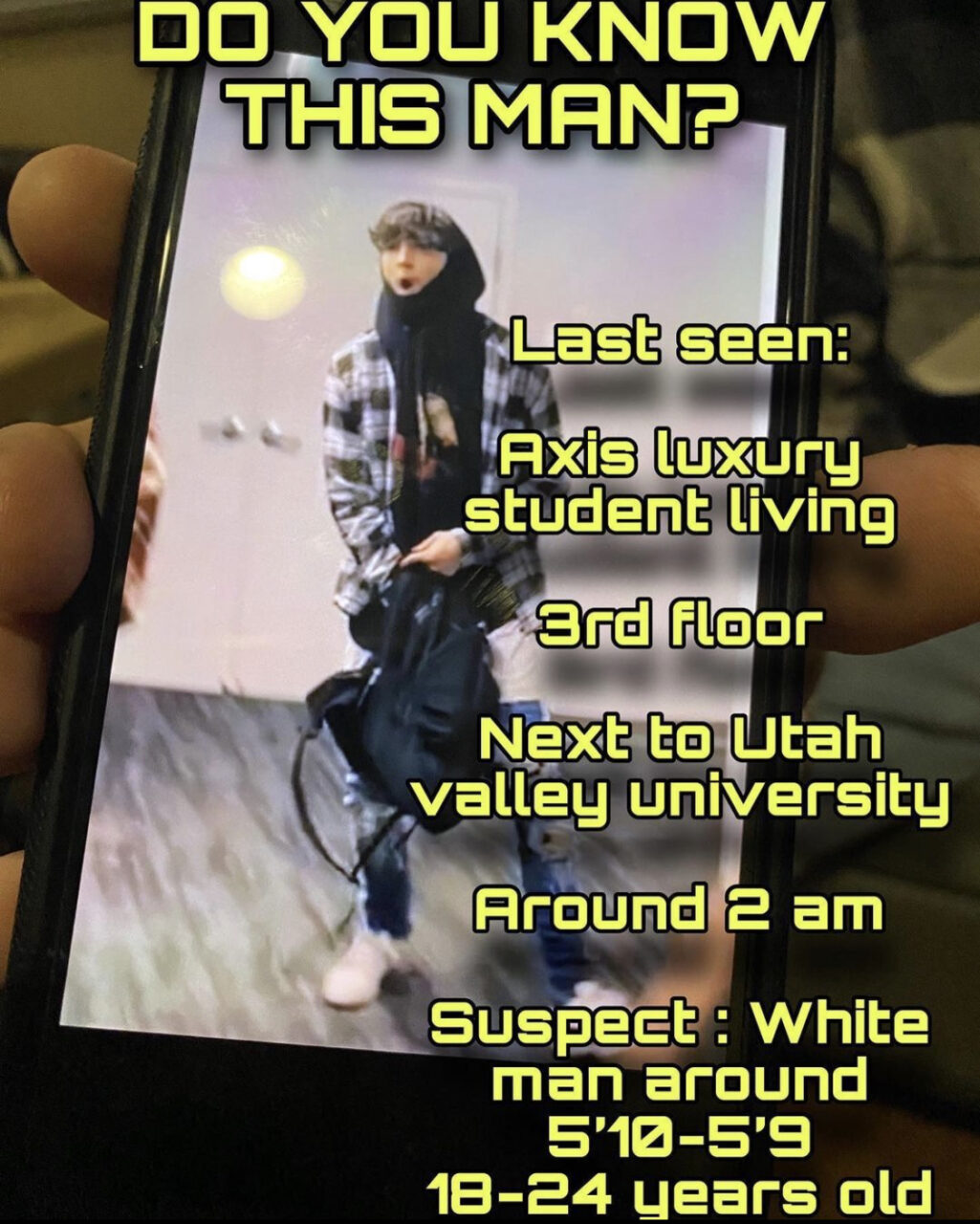 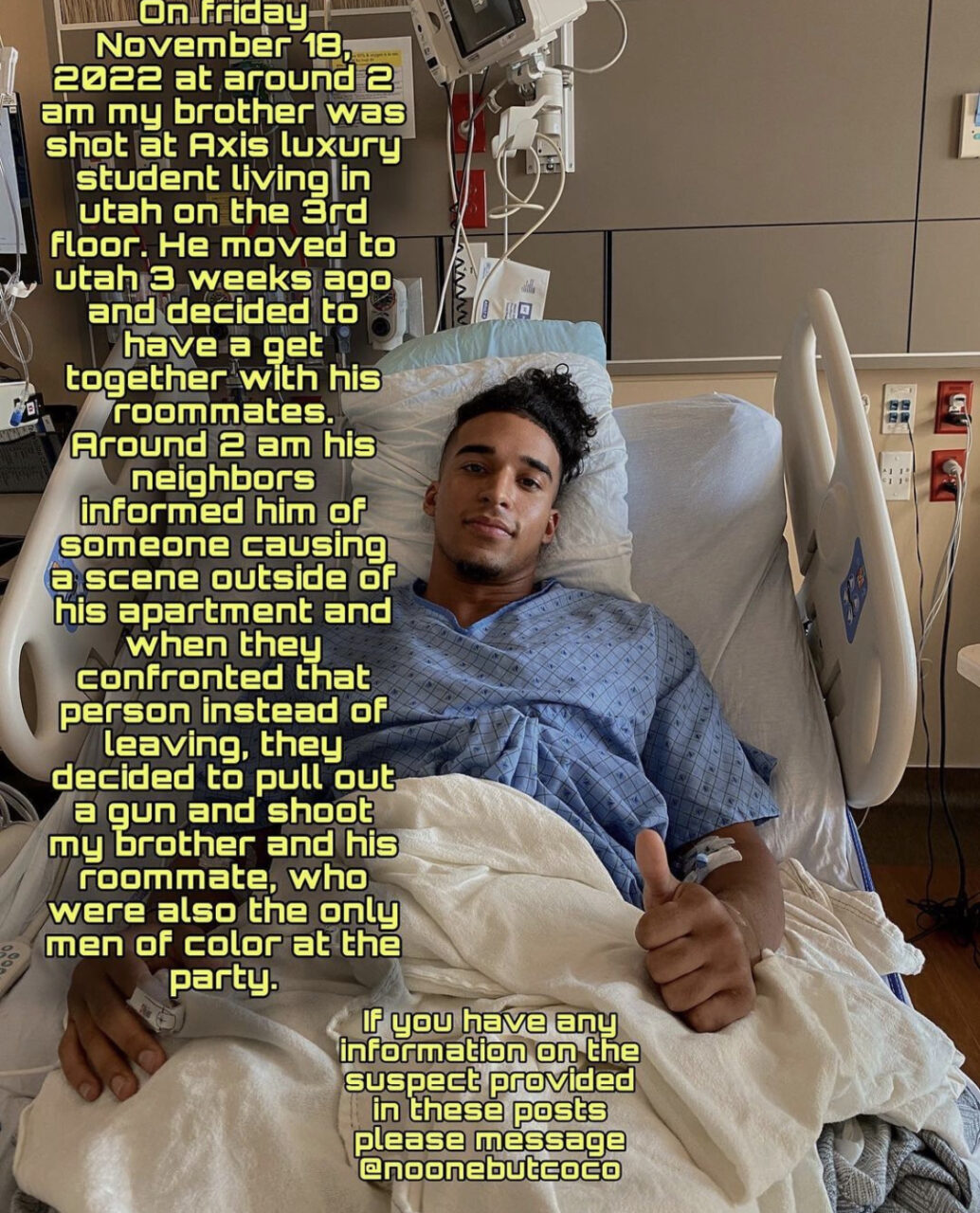 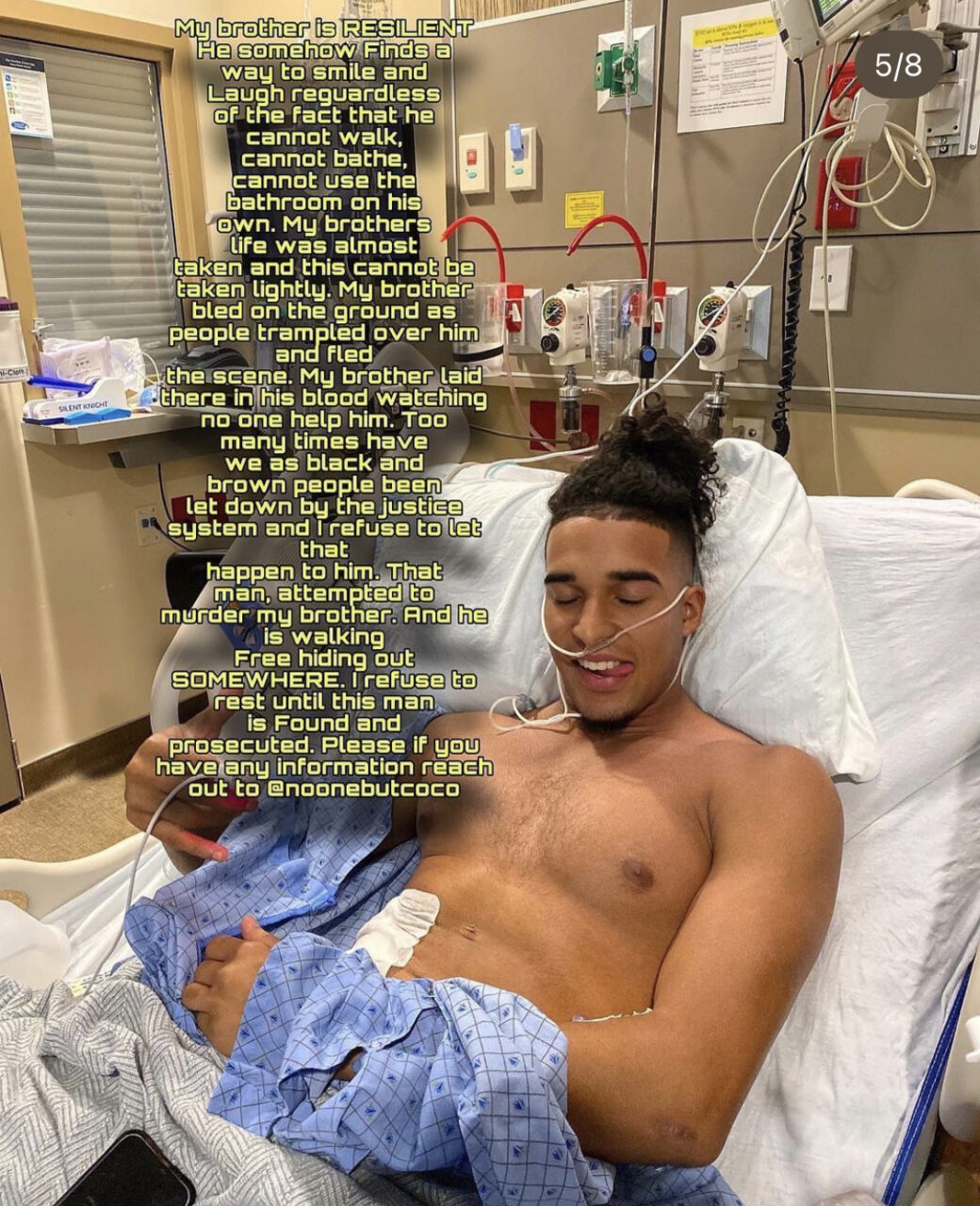 Posts shared by @provohub and Brooks, from the victim’s sister, @noonebutcoco. According to @noonebutcoco, the suspect’s identity has been found.

Brooks was sitting in bed at the time of the shooting, but when he heard “shouting and chaos” coming from outside his window left to investigate.

“I saw people running out of Axis building B — I live at A — and I saw a man in a black shirt fall in the middle of the street. People started taking off their shirts to try to help and slow down the bleeding,” Brooks said.

Brooks, originally from Atlanta, Georgia, mentioned shootings like this are unfortunately not new to him so he was not particularly scared, but he knows many residents are.

“Yesterday we had a former FBI agent come to our FHE who helped residents through trauma therapy. Many people showed up to that and learned self-defense tips and how to process trauma,” he said.

On Axis’s safety measures, Jarman noted the complex’s controlled access, cameras and a security company that comes and patrols the area at night.

“Residents also need to be vigilant,” Jarman said. “They need to ensure that if somebody is outside saying ‘hey, let me in,’ they need to say ‘use your fob to get in.’ Any landlord can only control the controllables. The uncontrollables are often those that live there. Everybody needs to play their part.”

Jarman ensured that in this situation, individuals were let in that did not have a fob because they were not residents and that those individuals are part of the “uncontrollables.”

“The safety of our residents is paramount. This is super concerning — we’ve been sending out daily updates but unfortunately, they don’t have the updates we want to send out, because we are still waiting on the Orem Police Department,” he said.

Jarman also noted that one reason Redstone Residential was “all hands on deck” in regard to this incident is because of the recent University of Idaho and Virginia events.

“We knew this was going to be crucial that our timing was as fast as possible — especially getting information out to our residents because the vibe in our country right now has senses heightened,” Jarman said.

According to the study titled “Assessing the Student Right-to-Know and Campus Security Act of 1990: An Analysis of the Victim Reporting Practices of College and University Students,” only 35% of violent crimes on college campuses were reported to authorities. In this study, students gave various reasons for not reporting crimes, including deeming various crimes to be “too minor” or a private matter or victims being ashamed or embarrassed.

According to the National Center for Education Statistics, in 2019 there were about 27,300 reported criminal instances in universities, colleges, trade and vocational schools. This is a 4% decrease from 2018 when 28,600 criminal incidents were reported.

“This annual security report is just one way BYU helps students and employees create a safe place to live, work and learn,” Autry said in the report.

The report includes campus safety and security policies, as well as resources for those in the area.

According to BYU’s report, reported criminal acts of violence including rape, fondling, robbery, burglary and motor vehicle theft have increased since 2019. Aggravated assault reports have decreased.

BYU logs reported incidents including the nature, date, time, general location and disposition of crimes occurring within the Clery Geography, and can be found here.

According to the USC Department of Public Safety, the Clery Act has four defined sex offenses for which crime statistics must be collected on Clery geography, including rape, fondling, incest and statutory rape.

BYU’s Annual Security and Fire Safety Reports state that victims of a Clery Act Crime may submit a written request for a report describing the disciplinary actions taken by BYU against the perpetrator of the crime, received from the Honor Code Office.

According to the Rape, Abuse and Incest National Network, college-aged women attending college are at an elevated risk of sexual violence. Additionally, according to RAINN, sexual violence is more prevalent on college campuses, compared to other crimes.