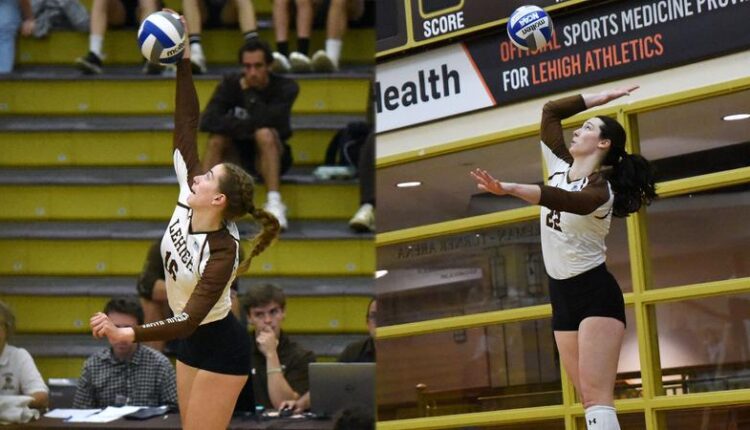 BETHLEHEM, Pa. – Sophomores Emily Stewart and Megan Schulte of the Lehigh volleyball program added another accolade as they were named to the CSC Academic All-District Team, announced by the College Sports Communicators on Tuesday afternoon.

The Academic All-District teams, selected by the College Sports Communicators, recognize the nation’s top student-athletes for their combined performances on the court and in the classroom. To be eligible for the team, a student-athlete must have a cumulative grade point average of 3.5 or better and be a starter or key reserve.

Stewart is an industrial and systems engineering major with a 3.64 grade-point average. She was an All-Patriot League second team honoree and saw action in 100 sets this year. Stewart contributed 197 kills for a league-high .350 hitting percentage. She finished the season with a team-high of 138 total blocks, which also leads the Patriot League, with eight solo blocks, and added 48 digs, 17 service aces and seven assists.

A business major with a 3.53 GPA, Schulte was a second team all-league recipient and a one-time recipient of the Patriot League Player of the Week, who finished the season as the team leader in kills with 324 with a hitting percentage of . 217 She concluded the year playing in 95 sets, recording four solo blocks and 35 block assists for a total of 39 total blocks. Schulte also added 176 digs, 23 service aces and 11 assists.

The Mountain Hawks concluded their 2022 season with a 13-15 overall record and 4-12 in Patriot League action.

JFK’s Thanksgiving wish: That we’re ‘humbly grateful’ for what brings us together