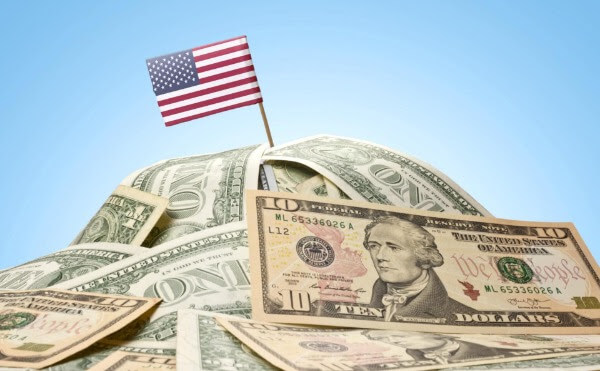 Personal income is up in Pa. and all 50 states. But many still struggle | Thursday Morning Coffee

(Image via The Michigan Advance)

If there was one chorus from progressives in the run-up to last week’s approval of the $40.8 billion state budget that takes effect today, it was that the decision to hold back $5 billion out of $7 billion in federal stimulus money was short-sighted because so many Keystone State residents are still struggling to recover from the pandemic economy.

Among them was state Rep. Jake Wheatley, D-Allegheny, who slammed majority Republicans for “[hoarding] money that was sent to support our schools, essential workers, and out-of-school programs. They want to control and hide these funds for their secret pet projects instead of giving it back to the residents of this great commonwealth.”

But new federal data shows that personal income is up in Pennsylvania and all 50 states. It’s a boost that the Biden administration attributes to the American Rescue Plan, the $1.9 trillion economic stimulus relief bill that signed into law in March.

So everything should be great, right? Not so fast, one expert told the Capital-Star. 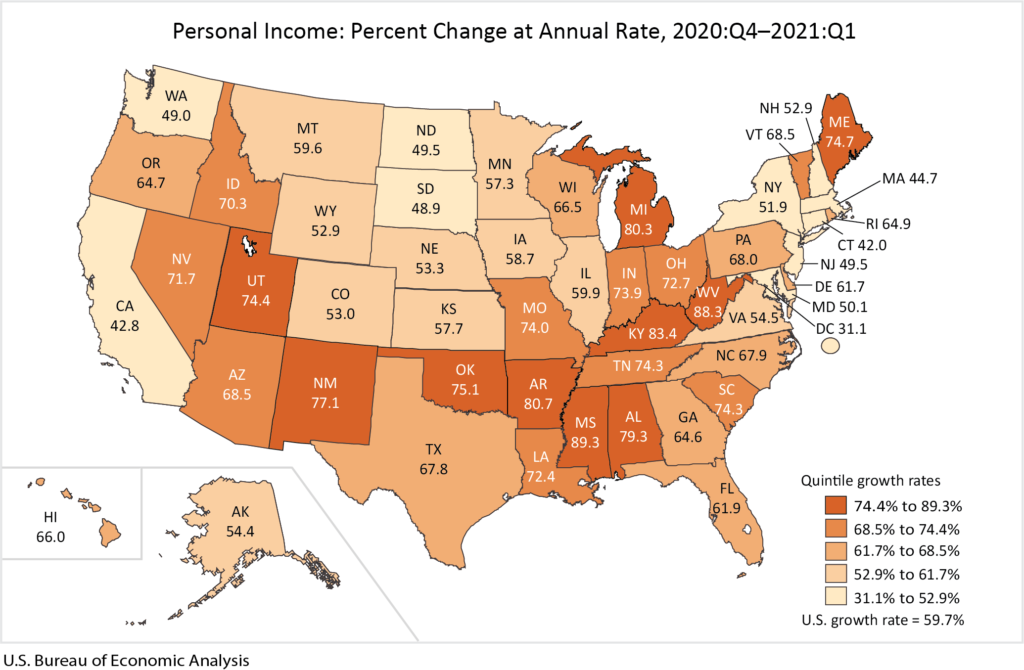 (Map via the Bureau of Economic Analysis)

While it’s true that state personal income increased 59.7 percent at an annual rate in the first quarter of 2021 after decreasing 3.9 percent in the fourth quarter of 2020, that’s only temporary.

Compare that energetic growth  against the fourth quarter of 2020, when personal income fell in 27 states and Washington D.C.

“Averages obscure the continuing impact of the recession. Small business makes up less than half the economic but they employed a lot of people and their revenues are still off roughly 30 percent since January 2020,” Marc Stier, the executive director of the progressive Pennsylvania Budget & Policy Center, told the Capital-Star in an email. “That is a main reason that unemployment remains at almost 7 percent. So businesses and mostly low- and moderate-income workers are still hurting.”

(Data via the U.S. Bureau of Economic Analysis)

The federal report found that earnings in Michigan and eight other states including Illinois, Indiana, Kansas, Kentucky, Missouri, Ohio, Tennessee, and Texas “increased in part due to profit sharing payments by auto manufacturers to workers represented by the United Auto Workers union,” the federal data showed.

Decreases in earnings in South Dakota and five other states including Iowa, Montana, Nebraska, North Dakota, and Wyoming “were primarily the result of decreases in farm earnings due to lower payments to farmers from the Coronavirus Food Assistance Program,” according to the federal data.

“Uneven recoveries are common. It takes a while for people to gain confidence to spend more. It’s harder now because of changes in consumption patterns,” Stier said. “People are still working remotely and buying online. It will take time for businesses and workers to partly go back to old ways and partly adjust to new ones.”

Meanwhile, at least one Democratic lawmaker says the numbers, while encouraging, don’t eliminate the need to keep pressing for programs for low- to moderate-income Pennsylvanians.

“Income has been higher but that’s directly a result of investment in people through things like stimulus and enhanced unemployment. With billions left in the state coffers, we should absolutely be investing in people – particularly those most at risk,” state Rep. Peter Schweyer, D-Lehigh, told the Capital-Star in an email. “Rental assistance, help with utility bills and a higher minimum wage should be next on the [legislative] agenda.”

Our Stuff.
As expected, Gov. Tom Wolf has vetoed a GOP-authored rewrite of state election law that imposed new voter identification requirements and tightened the deadlines for obtaining a mail-in ballot. Republicans now say they’re going to put the language into a constitutional amendment to get around the veto pen, Stephen Caruso reports.

At a press conference on Wednesday, Wolf and educators and their allies praised the hundreds of millions of dollars in new education spending that’s included in the state budget. But work remains to be done. Marley Parish has the details.

A divided Pennsylvania Supreme Court vacated comedian Bill Cosby’s sexual assault conviction on Wednesday, clearing the way for the 83-year-old to be released from state prison, I report.

Our partners at the Philadelphia Gay News explain how these Philly community organizations facilitated an ambitious, youth-centered study on community policing.

On our Commentary Page this morning, Philadelphia attorney Rory Fleming says Attorney General Josh Shapiro is putting the spotlight on ghost guns, but that’s the wrong place to look if he’s serious about solving rising violence in the state’s biggest city. And John Dawes of the Foundation for PA Watersheds is urging legislative support for a bill authorizing the state’s 3rd Growing Greener environmental program.

Elsewhere.
University of Pennsylvania President Amy Gutmann and political bigwig David L. Cohen could be in line for plum ambassadorships, the Inquirer reports.

The Morning Call looks at the ongoing vaccine hesitancy among Allentown’s Latino neighborhoods.

The state Health Department is taking the COVID Delta variant ‘very seriously,’ and is urging people to get vaccinated, the York Daily Record reports (paywall).

The Observer-Reporter takes a look at funding for the Pennsylvania State System of Higher Education in this year’s state budget.

Stateline.org looks at the dilemma facing parents in school districts that have banned mask mandates.

What Goes On
It’s the pre-holiday lull. The docket is clear.

Wednesday’s Gratuitous Hockey Link
Tampa took a 2-0 series lead against in their Stanley Cup final against Montreal on Wednesday night, beating the Habs 3-1.

Lehigh Field Hockey: Grateful for Every Moment Together

Pa. Att’y Gen. Shapiro is putting the focus on ghost guns – but that’s the wrong place to look for a solution to Philly’s violence problem | Opinion