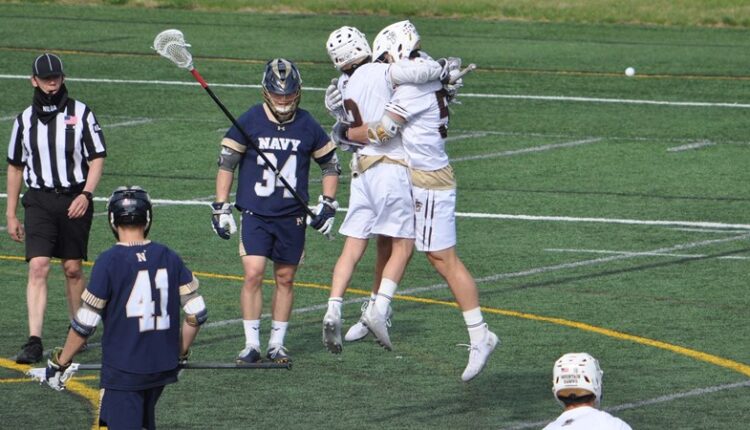 BETHLEHEM, PA. – Lehigh men’s # 7 lacrosse team remained undefeated on Saturday, finishing the first half with an 8-1 run to take a six-goal lead at half-time on the way to a 13-7 win over No. 19 to achieve Navy. With the victory and the results for the Patriot League, the Mountain Hawks officially took the title of the South Division and thus the first two places in the upcoming Patriot League tournament. Lehigh is now a total of 6-0, 5-0 in the Patriot League and 4-0 in the south. Navy fell overall to 3-2, 1-2 in the league (and in the south).

“I was proud of the way our boys fought throughout the game,” said Lehigh head coach Kevin Cassese. “I thought it was an up and down game, lots of runs. Navy played with great desperation today because they knew they had to win to win the Patriot League tournament. Playing against a desperate team is one Difficult task I was proud of the effort our boys put in all the way. It was impressive to finish the game and increase our lead when we needed to. “

“Sometimes you win games on the offensive. Sometimes you win games on the defensive,” said Cassese. “I thought we definitely won today with our defense. We were excellent on the face-off; Mikey Sisselberger was dominant again. James Spence was excellent in the cage. I thought we played well on the defensive, which we did too to do.” had been absent in the past few weeks. “

After Navy scored the first goal, the Mountain Hawks ended the first quarter on a 3-1 run. All goals were scored within 2:17. The Mids drew 3-2 at the start of the second round, but Lehigh finished the verse with five direct goals, two of which were man-up tallies. Schelling’s second goal in a row and the fourth point in the first half gave the Mountain Hawks an 8-2 lead after 30 minutes.

Navy beat Lehigh 3-1 in the third quarter and moved into fourth place within 9-5. But Mule ‘scored two goals in a row to put the Mountain Hawks 11-5 ahead, which erased many doubts on the road to a 13-7 win.

Junior Mike Sisselberger continued his sensational game. The nation’s leader in terms of percentage win and groundballs per game finished Saturday the 18th of 23 with 11 groundballs. Senior James Spence made 14 saves, seven of them in the third quarter.

Just an average day in the office for Mikey Sisselberger, who won 18 of 23 with 11 groundballs this afternoon. pic.twitter.com/oMMTaICs62

James Spence was CLUTCH again this afternoon, making 14 saves, seven of them in the third quarter alone. pic.twitter.com/WkoFEh2ho2

– Lehigh Lacrosse (@LehighLacrosse) April 10, 2021 “I thought we had a really good lead today from our defensive captains Matt Douglas and Teddy Leggett,” said Cassese. “Andrew Eichelberger did a lot of the defensive work with Jack Spence from the line-up. Our captains did a great job of being selfless and leading. We definitely needed them and that has been reflected in our defensive efforts shown.”

The final shots were 55-36 in Lehigh’s favor, while the Mountain Hawks had a 42-25 lead on the groundballs. Navy’s Spencer Rees finished 14th with 15 saves over Spences.

– Patriot League on ESPN (@PatriotLeagueTV) April 10, 2021 Lehigh is now one of only three remaining undefeated teams in the nation and will be back in action next weekend when it comes to a pair against Lafayette – Friday (8 p.m.) ) in Lafayette and at home against the leopards on Sunday (12 noon).