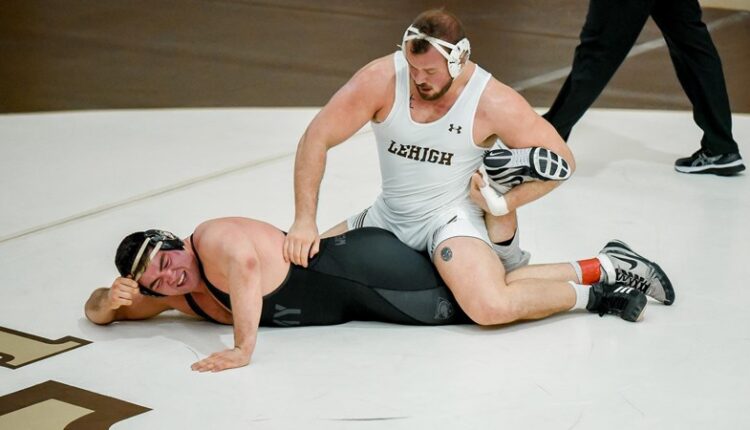 BETHLEHEM, PA. – For the second week in a row Lehigh needed a late rally and for the second week in a row Seniors Jake Jakobsen and Jordan Wood delivered in the fifth year. This time it was a decision to turn a 16:12 deficit into an 18:16 win over Army West Point for the Mountain Hawks in 25th place in the first of two duals on Saturday at the Leeman-Turner Arena in Grace Hall.

Lehigh’s three-doubles winning streak was captured in his second double of the day when No. 14 North Carolina won the middle eight bouts to beat the Mountain Hawks 26-6.

Wood and Junior Jaret Lane both recorded 2-0 days for the Mountain Hawks, who are now 3-3 in the doubles season.

Lane and sophomore Mitch Polito put the Mountain Hawks 9-0 against Army with two wins at 125 and 133. The doubles began with Lane building a 6-1 lead before throwing Ryan Chauvin on his back for a fall at the 2:19 mark. Polito followed with two losses in the first period to Mark Montgomery and two escapes in the third period which made the difference in a 6-5 decision.

Sophomore Brian Meyer brought Lehigh back into the lead with a solid 6-3 win over Will Lucie (165), but the Black Knights had an important decision from Ben Pasiuck (174) and a 4-0 win by Taylor Brown over the newcomer Caden Wright (184) went 16-12 with two bouts remaining.

Jakobsen kept the Mountain Hawks within striking distance with a 7-1 decision against JT Brown in 15th place in 197 and thus avenged a defeat against the Cadet in last year’s EIWA quarter-finals. After a goalless first period, Jakobsen scored a takedown in the second and added a penalty point for an illegal mat return, escape and takedown in the second, along with a time advantage.

Just like his Binghamton game last Saturday, Lehigh needed a Wood win to complete the comeback, but this time only one decision would be enough. Wood answered. The first stage against Bobby Heald was goalless, but Wood drove out the second, scoring an escape, a stalling point, and loss in the third to win 5-0. Lehigh won for the sixth time in a row.

Lane gave the Mountain Hawks a strong start against North Carolina, scoring two losses in the first period and one reversal in the second period in a 7-4 decision over Wil Guida.

Polito scored the first goal against Joe Heilmann with 133, but a takedown for Heilmann at the end of the first half and a strong run in the second drove him to a 5-2 decision that tied the double 3-3.

Senior Brandon Paetzell made his season debut, wrestling with 141 against Zach Sherman in 11th place. The only point of the fight came over a second period of Sherman’s escape. Paetzell went neutral to open the third half and had a good shot attempt in the last minute that he couldn’t stop when Sherman scored a 1-0 win.

North Carolina (4-2) won eight fights in a row from 133 to 197, including a key decision from senior Austin O’Connor (149) and a key decision of ninth Kennedy Monday (165). Meyer met in the third period on Monday and rode him out for most of the verse, but fell 10-2.

Wood gave up the first loss in the last fight of the day against Brandon Whitman but scored the last eight to win 8-2 for Lehigh’s second win against the Tar Heels.

The Mountain Hawks end their weekend with a match against Rider Sunday at 1pm at the Leeman-Turner Arena in Grace Hall. The game will be broadcast on Service Electric Network and streamed at Lehighsports.com/watch. The audio broadcast will be available on Fox Sports Radio 1230/1320 AM and 94.7 FM Allentown and LVFoxSports.com.