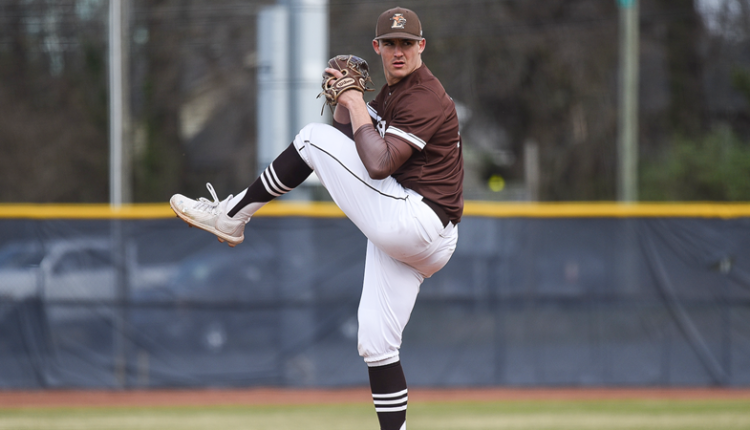 BETHLEHEM, PA. – At the start of the 2021 season, the Patriot League officially launched its preseason awards when Lehigh baseball junior right-handed Mason Black was named the league’s preseason pitcher and preseason pitcher for SIDs. Additionally, the Mountain Hawks were voted third with two votes in first place.

Black, recently named a Third Team Preseason All-American by Baseball America, will become the first preseason pitcher of the year in at least two decades.

“Mason definitely deserves the preseason recognition he’s garnering,” said head coach Sean Leary. “But I think it’s great that his focus is still on the task at hand, which will help lead our program to a third Patriot League championship.”

In his third season with the Mountain Hawks, Black went down to 2-1 in four starts with 3.68 ERA last season but knocked out 29 batters and walked just eight in 22 innings. He knocked out nine batters in each of his last three season starts, cut short by the COVID-19 pandemic.

Last summer, Black went 3-0 with an ERA of 0.64 and was named Pitcher of the Year in the South Florida Collegiate Baseball League. So only 10 hits were scored in 28 innings with 42 strokes and the league’s all-star game started.

He has the chance to become the top-staffed player in the program and league for the 2021 MLB Draft this summer. This award is currently held by program legend and Lehigh Hall of Famer Matt McBride ’07, who was the 75th overall selection of the Cleveland Indians in the additional second round of the 2006 MLB Draft.

Black was named a Top Draft in the Patriot League by two major publications, D1Baseball.com and Baseball America, prior to the start of the campaign. Many scouts and the media have given him the opportunity to be drafted within the first three rounds.

As a team, the Mountain Hawks were voted third in the Patriot League with 37 points and two votes in first place, followed by Army West Point (39, 1 vote in first place) and Navy (49, 9). This is Lehigh’s highest ranking in the preseason since placing third before the start of the 2017 season. The Mountain Hawks are looking to qualify for the Patriot League tournament for the first time since 2016.

“Our program sees preseason polls as a great motivator for the year,” said Leary. “We know and respect that the academies deserve to be the Patriot League favorites, but our boys need to keep their focus on playing our best baseball in May.”

Led by Leary, starting his 26th season at the helm, Lehigh could only advocate having the strongest starting rotation in the Patriot League this season, led by three MLB draft hopefuls this summer in black, Senior Righty Matt Svanson and Junior Southpaw Luke Rettig. Second right-hander Carlos Torres and newcomer Lucas Rich are also making a strong start to the season and are poised to fight for rotation points.

The opening day for Lehigh is set for February 27, a double header with Coppin State in Baltimore.