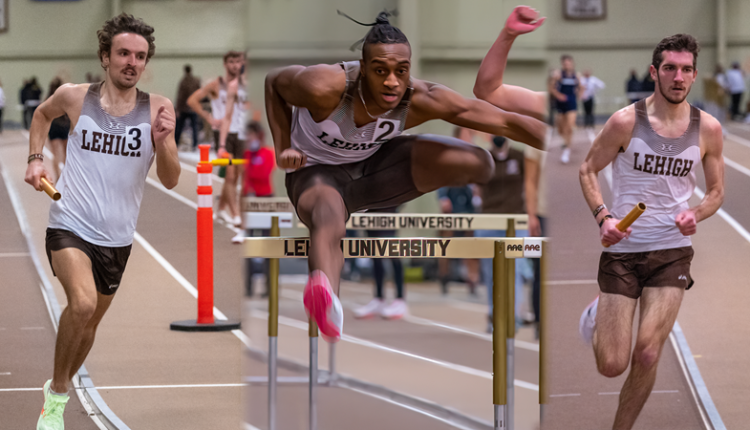 BETHLEHEM, Pa. – The men’s track and field team is ready to battle at the much-anticipated dual meet against Lafayette on Saturday at 2 pm The Mountain Hawks will host the Leopards at Rauch Fieldhouse in the Rivalry presented by Lehigh Valley Health Network and Coordinated Health.

“I think I speak for the whole team when I say we are very excited to be back to the dual meet format,” said head coach Matt Utesch. “We are not here to take anything for granted and these men are ready to lay it all on the line. From now until the Patriot League championships we are looking to take advantage of every opportunity.”

Lehigh had impressive performances on Saturday, where the team competed at both the John Covert Classic at Rauch Fieldhouse and the Villanova Invitational at Ocean Breeze in Staten Island, NY The Mountain Hawks finished the two events with 22 PRs and four top 10 all additions, including senior Kyle Burke’s broken school record.

The Mountain Hawks had themselves quite the day in Staten Island on Saturday. Leading the team was Burke, who broke the school record in the 1000m (2:24.61). Burke had a strong, consistent performance at Ocean Breeze, proving that the senior may have more in store for the remainder of the season.

The Mountain Hawks have not competed in a dual meet against Lafayette since January 2020, where they defeated the Leopards in Rauch Fieldhouse, 99-79.

Saturday’s meet against Lafayette will begin at 2 pm with the women’s pole vault, women’s weight throw, men’s high jump and men’s long jump. The women’s mile will kick off the track events at 3:30 pm

Live results for Lehigh’s meet will be available on Saturday. Check back to Lehighsports.com for a full post meet recap.