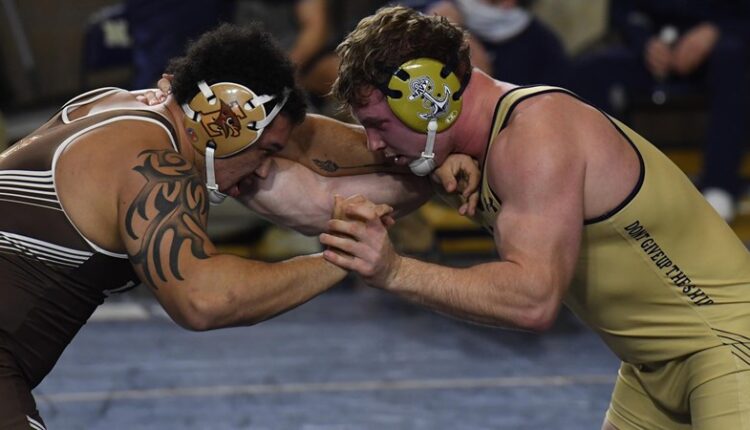 No. 18 Lehigh Falls At Navy As Mids Claim First Win in Series Since 2011

ANNAPOLIS, Md. – On a night when nine of the 10 fights were resolved by three points or less, the Navy found a way to win most of the close fights. No. 18 Lehigh took an early 6-0 lead before the Mids rallied to win seven of the last eight fights to outperform the Mountain Hawks 21-9 at Alumni Hall on Saturday night.

Lehigh used hard work in the top position to play the first two fights without the benefit of a takedown. At 125, Junior Jaret Lane managed an escape after being ridden in the first 1:15 of the second period and then responded by riding out Logan Treaster in the third and winning 1-0.

Newcomer Malyke Hines rode out the second third in his match with 133 against Jacob Allen and added an escape to 2-0 at the beginning of the third period.

At 141 years old, newcomer Connor McGonagle Lehigh’s first takedown of the dual and led Navy captain Cody Trybus 2-1 after the first period, but Trybus responded with an escape, a takedown and a strong ride in the second period and won continue 5-3 to put Navy on the scoreboard.

The Mids leveled things out after 149 when Casey Cobb scored a takedown in the first period and added a late counter takedown after a desperate attempt by Junior Jimmy H0offman when Cobb won 5-2.

The dual’s wildest fight came at 157, when the second AJ Burkhart made his first dual appearance against Andrew Cerniglia. After a goalless first period, Burkhart was spun for two near-points at the beginning of the second period before turning Cerniglia on its back for two plus four. Cerniglia returned before Burkhart gave him the 7-4 lead after two periods. Cerniglia turned back to open the third period, gained a driving time advantage and after an escape from Burkhart, scored the decisive takedown with 25 seconds remaining, holding Burkhart back to win 9-8 and give the Mids the lead.

Tanner Skidgel in eighth place made four straight wins for Navy with a 2-0 decision over Brian Meyer at 165. Skidgel escaped in the second period and rode out in the third period.

Freshman Jake Logan stopped the Navy run with a 7-4 decision over Drew Caravela at 174. Logan scored a takedown in each period as well as an escape from the third period.

Navy’s David Key won a real freshman bout against Lehigh’s JT Davis at 184 by a 5-2 decision. Key scored a takedown to lead 3-1 after two in the second period and countered an attempt by Davis late.

The Midshipmen won their first win against Lehigh in 10 years at 197, when Jacob Koser defeated senior Jake Jakobsen 6-1. Koser scored a takedown in the first third and countered strong drives by Jakobsen with reversals in both the second and third third.

In the last fight of the doubles junior heavyweight Victor Lacombe lost a 3-1 decision against John Birchmeier of the Navy.

The Dual itself only had 12 combined takedowns, with Navy holding an 8-4 edge. The Mids led 4-1 in reversals, while each side had a nearfall, Lehigh a four-pointer and Navy a two-pointer. In six of the ten fights there was no goal in the first three minutes.

The Mountain Hawks will welcome Drexel on Sunday, January 24th at 2pm in the Leeman-Turner Arena in Grace Hall. The double will be broadcast locally on the Service Electric Network and streamed on Lehighsports.com/watch.