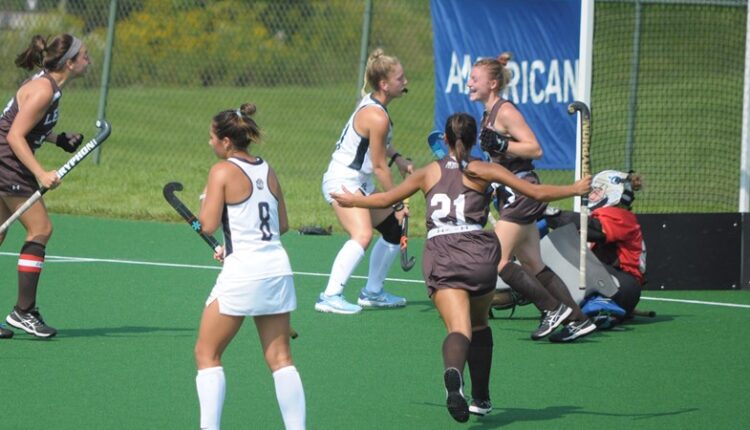 BETHLEHEM, Pennsylvania – Two first-half goals in just over four minutes proved to be all the Lehigh field hockey team would need on Sunday as the defense fell by the wayside in their 2-1 win over Georgetown. Junior Sarah Bonthuis continued her brilliant start to the season, scoring her fourth team goal to start off, then assisting in Senior Leah Mullery’s goal just 4:13 later. Junior Maddie Kahn was impressive in goal and finished it with seven saves, including two sensational stops in the first half and three big saves in the last minute after penalty corners.

“We had a challenging session yesterday. We had some key components that we wanted to meet,” said Caitlin Dallmeyer, Lehigh head coach. “First of all, we wanted to work on catching the ball and making sure we weren’t in a 1-on-1 defensive position. Second, we had to work on our press. Third, we really had to focus on connecting and communicating.

“I thought we did two of these really, really well. We are still working on communicating as a team, especially when we have breaks and use our energy and voice to stand up and solve problems, but we will get it there reach.”

Will you miss today’s 2-1 win over Georgetown? This time we forgive you 🙂 We are here for you. pic.twitter.com/OLEgVkZFyB

Lehigh had the upper hand early on and had a 6-2 lead in the first quarter. The sixth shot went into the net as senior Olivia Perrone Bonthuis struck on the right and the junior fired a high shot from distance that defeated Georgetown goalkeeper Ciara Weets 14:20.

That’s how we scored the goal today, an amazing shot from Sarah Bonthuis’s stick for her fourth goal of the season! pic.twitter.com/nGe77kxEAN

– Lehigh Field Hockey (@LehighFH) September 12, 2021 Just 3:33 in the second quarter, Bonthuis was right in the middle again. This time she fired a ball towards the cage, which Mullery deflected past Weets to make it 2-0.

That Leah Mullery goal from Sarah Bonthuis gave Lehigh a 2-0 lead this afternoon and proved to be the game winner. pic.twitter.com/gCV8Biowbq

– Lehigh Field Hockey (@LehighFH) Sep 12, 2021 Georgetown hit the board late in the verse when Sophie Towne deflected a feed past Kahn to draw 2-1 at 28:11. That well-placed shot didn’t change Kahn’s impact as she made two excellent stops in the second quarter to keep the Mountain Hawks ahead in the half.

In the third quarter, Lehigh had a 7-1 lead in shots and a 6-1 lead in penalty corners (five came in a row in less than a minute of play).

Georgetown turned the tide and held a 6-0 lead in the fourth round. Three shots on goal (and two corners) fell in the last 30 seconds, but Kahn and the Lehigh defense stood high.

Maddie Kahn was a sensation throughout the game, even if she came out big with two stops in the final seconds as the Mountain Hawks celebrated the 2-1 win! pic.twitter.com/gJTD7yxAZl

– Lehigh Field Hockey (@LehighFH) Sep 12, 2021 The final shots were 16-12 in Lehigh’s favor while the Mountain Hawks held an 11-4 edge in corners. Kahn’s seven parades met Weets, who made four for Georgetown.

“It’s really difficult to be in this situation where you lead 2-1 and then in the end you have these two defensive corners,” said Dallmeyer. “Mentally it’s a really tough challenge. In the past we haven’t always been able to keep this ball out of the cage. Maddie did a great job keeping the defense focused and making sure we can make some good stops to stay. ” the victory.”

The Mountain Hawks are now looking forward to the Patriot League game, which begins this Friday at home against Boston University. The game time is set at 4:00 p.m. on ESPN +.

“I’m delighted that there is a track record in a really tough BU team,” said Dallmeyer. “We have confidence among ourselves and we are very focused on continuing to show our skills on the Patriot League stage.”

Here’s what goalkeeper Maddie Kahn had to save after seven big saves in today’s 2-1 win over Georgetown. pic.twitter.com/11d6T6fGlS

We met Sarah Bonthuis, who scored a goal and an assist in today’s 2-1 win over Georgetown! pic.twitter.com/FxHRUQ1N0s