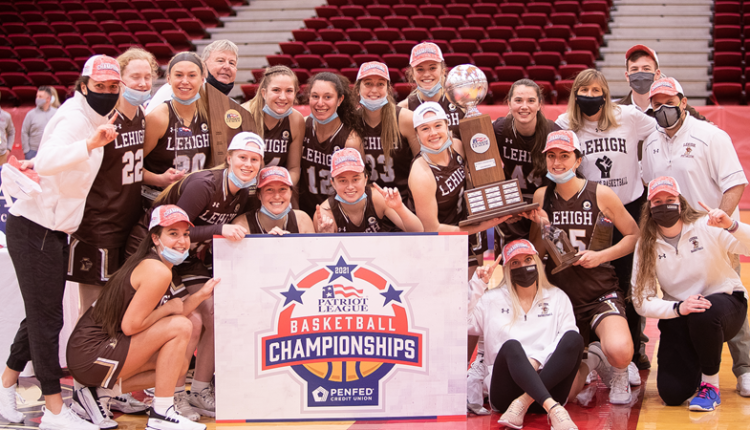 BOSTON – For the fourth time in program history and for the first time since 2010, the Lehigh women’s basketball team won the Patriot League championship, beating second-hand Boston University between 64 and 54 at Case Gym on Sunday afternoon. The win beats the Mountain Hawks’ ticket to the NCAA tournament for the fourth time. Lehigh, who upset Bucknell on Thursday night and was previously undefeated, was ready to do the same to repeat the success and claim the historic victory.

“I’m just very proud of the team. I’m really happy for them. I was excited to have them play in a championship game and I thought they came out and really played the game plan on the offensive and defensive I could don’t be prouder, “said head coach Sue Troyan. “I’ve talked a lot about what they went through during the season, which was by far the toughest season for coaches and players. Really challenging. Lots of ups and downs, lots of ups, lots of lows and lows. Your resilience has been incredible.

“There were times in the season when we really wondered if we should do that.” It kept coming back to what they wanted and they always said they wanted to play and fight for a championship. To get to that point and compete and win it is well deserved what they endured. “

Frannie Hottinger took over when the team needed her most, scoring 21 points on 9 of 14 with four rebounds. Junior Emma Grothaus played 36 minutes and scored 12 points with eight rebounds, one assist and two steals on the way to becoming the most valuable player in the Patriot League tournament. Grothaus and Hottinger were Lehigh’s two All-Tournament Team Prize winners.

The first quarter belonged almost exclusively to Lehigh and led the Terriers in the first break with 23-13. Playing with a two-point advantage of 15-13 and 3:16, the Mountain Hawks made an 8-0 run to close the quarter and lead at 10 at break.

After four straight points from Grothaus in the first two minutes of the second quarter to increase Lehigh’s lead to 11 points (27-16), the Terriers took a break. Frannie Hottinger hit a 3-pointer 7:36 to extend the lead to 12, the Mountain Hawks’ biggest to date, but an 11-1 run at the end of half that was capped by a 3-pointer from Emily Esposito on Am Summer had BU within striking distance, 31-29 went into the locker room.

The third quarter was mostly played neck to neck as the Terriers took the lead at 8:46. The Mountain Hawks were able to keep BU in check and eventually brought the lead back to eight points to close third after two free throws from Mary Clougherty. Newcomer Jamie Behar had a strong third place with two consecutive 3-pointers to turn the game from one possession to two.

We know how much you like your highlights (we look at you, coach @ amicker23!) So here are the best ones ever.

After a 30-second break from Lehigh, the game’s big boost came for the Mountain Hawks, who were launched with a layup by Megan Walker to bring the lead to five points at 2:57. She hit another shot at 2:08 to get up at seven, and then Hottinger followed with a clutch shot at 1:12 as Lehigh took a 60-51 lead. The foul then began for the Terriers when Lehigh converted four foul shots to score the 64-54 win.

“Looking back on the last two games, we really switched defensively, what we did against Bucknell and what we did against BU. Both coaches [Trevor Woodruff and Marisa Moseley] are excellent coaches for X and O, they prepare their team well and they play well, “said Troyan.” We went on the defensive and only said if we play man-to-man we won’t be able to do that. “suits them, so we decided to give them a lot of different looks.

“We’ve been reviewing a lot of movies over the past few days. My deputy head coach Glenn Rigney did a phenomenal job and while we only had two days to prepare, we basically put in a whole new defense program that was in the Zone and then on the first pass went to the human. We showed a 1-3-1 look, a 3-2 look, and a 2-3 look and it got them out of their comfort to do this what they were going to do, and I thought they’d just never do. They were comfortable in their offensive sets. They did their zone stuff against men. We messed up our work and I thought that really got them off balance. “

Cut the nets! For the fourth time in program history (and for the first time in 11 years), the Mountain Hawks are #PatriotWBB Champs! #GoLehigh | #SoarWithUs pic.twitter.com/cZuVvPijcq