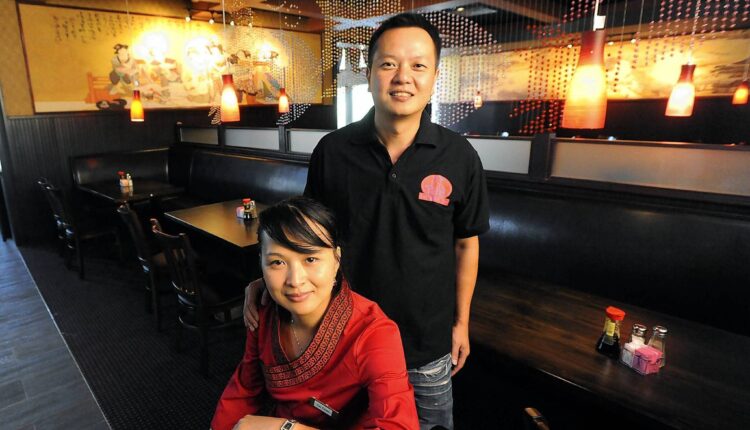 Carnivores, don’t worry. The new tenant of the former Charlie Brown’s Steakhouse in South Whitehall Township, Lily Sushi Asian bistro, also serves a variety of meaty dishes. However, the main attraction of the Chinese and Japanese restaurants is seafood, which is prepared in a variety of ways including grilled, sautéed, fried, deep-fried, and steamed.

“Our approach to food is very fresh,” said Zuru “John” Zhang, co-owner of the restaurant, which opened on Thursday. “Lots of Chinese and Japanese places to eat and decorate are old-fashioned, but Lily is completely modern.”

Zhang is co-owner of the restaurant on Walbert Ave with his wife Xiu Chen. 1908. The Wyomissing couple and a team of helpers spent nine months renovating the room. With the exception of a sushi bar, where guests can watch the food being prepared, the layout has largely remained the same.

The menu includes starters such as spring rolls, edamame and crispy calamari; Noodle and rice selections such as Lo Mein, Pad Thai, and fried rice (chicken, beef, or shrimp selections); and traditional Chinese and Japanese dishes such as tofu teriyaki, chicken and pork katsu by General Tso. Hibachi starters made in the kitchen include scallops, lobster tail, and filet mignon (steak lovers, rejoice).

The main attraction is of course the sushi. In addition to classic rolls like Philadelphia (smoked salmon, avocado and cream cheese), the Lily restaurant serves signature rolls like Allentown (fried mixed white fish, avocado and cheese). Buns range from $ 3.50 for a classic avocado to $ 12.95 for a signature lobster.

The Lily Sushi Asian Bistro with a wraparound bar and a room on the second floor for private parties is open seven days a week. Lunch offers are available from Monday to Saturday from 11 a.m. to 3 p.m. Info: 610-821-8886 or lilysushigrill.com.

Many retail watchers, including Pat Kalman of Bethlehem and Kathy Stranzl of Coplay, have inquired about the recent construction on the Whitehall Mall.

Well guys I hope you guys like chicken wings because Buffalo Wild Wings According to a press release from Simon Property Group, it will open in December on Grape Street between the Wells Fargo and Lafayette Ambassador banks.

The Minneapolis-based restaurant chain for casual dining and sports bars has more than 900 locations in the United States and Canada. It’s known for its namesake Buffalo, NY-style chicken wings, as well as its wide range of premium and domestic beers.

The restaurant is accessible from the entrance of the Grape Street shopping center and will be the chain’s second location in the Lehigh Valley. The first on Route 248 in Lower Nazareth Township opened in 2011.

Where one Whitehall business goes, another goes – but not forever. VIP vacation The travel agent was recently moved from 3108 Sodl Lane in the township to 3243 Easton Ave. moved to Bethlehem. An open house party with a live band, 30 vendors and six Christmas presents will take place on Sunday from 12 noon to 4 p.m.

According to the VIP Vacations website, “the company’s disparities and connections with top resorts around the world will enhance your stay in VIP status”. The travel agent’s price also matches with all online travel websites before you pay your deposit. Info: 610-865-1055 or Vacationsbyvip.com.

“We are very excited about our new location and the new menu options that we can offer,” says a sign in the window.

According to Wrap’d Tight’s Facebook page, the company offers gourmet and grill wraps, as well as the best baked potato in Bethlehem’s South Side. Info: 610-866-0316.

Other business events in Bethlehem include the grand opening of the Twisted olive, a casual bistro-style restaurant serving international cuisine at 51 W. Broad St. (formerly Starfish Brasserie Room) on Thursday; and building a showroom for Clever cabinets, a custom cabinet design company, at 1117 W. Broad St. (next to Exxon Gas station and will debut in October).

According to co-owner Louis Rotiz, the car dealer will “have over 100 high-quality used vehicles for sale”. It will also include a service center that offers everything from detailing and inspections to maintenance and major body repairs.

Shoppers can browse the various makes and models of Penn Auto Group online at pennautogroup.com. Info: 610-674-4000.

I conclude with two developments in Hellertown.

Warm sugar last business day at Main Str. 1308 was August 17th. The bakery that opened next door in early 2011 Pondeleks florist and gifts, however, has not disappeared.

According to owner Laura Buffi, the candy company will offer a delivery service from a remote location in Bethlehem until it finds another retail location.

Second, Papa Johns at 1236 Main St. (near Saucon Valley music) opens its doors on September 1st from 4pm to 8pm. According to franchisee Kevin Godusky, the pizzeria’s first day of business will be open to “family, friends and anyone who wants to order a pizza.”

After September 1st, the pizzeria begins its regular opening times, Sunday to Thursday 11 a.m. to 11 p.m. and Friday and Saturday 11 a.m. to midnight.

The franchise will join a rich selection of pizzerias in the boroughs, including Crossroads Hotel, Rome pizza, Roccos, Antonios and DiMaios.

Retail Watch tracks the development of new stores, restaurants and banks in the Lehigh Valley. Do you have a question about a retail construction project, a store opening or a chain that you would like to visit on site? Call Reporter Ryan Kneller at 610-820-6597 or email [email protected] Retail Watch appears every Sunday.

The Solution to Au Pairs’ Health Coverage Gaps May Be Simple: ACA Plans