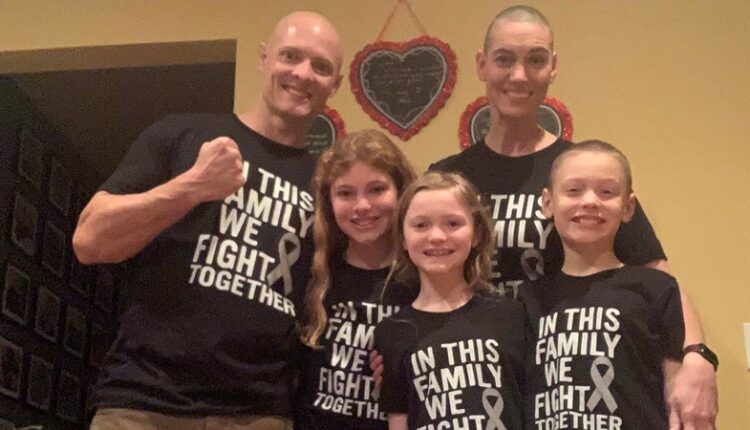 Lehigh Family Stands Alongside Allen in her Battle with Cancer

She was diagnosed with breast cancer.

“I’m the type of guy who takes the time to process it and cry after a diagnosis is made. But the next day I ask … what’s my plan?

“The game plan is really what I call it.”

The diagnosis was based on routine mammography.

“As I examined myself further, I felt the lump and asked to move the second mammogram up, which goes a little deeper into the imaging,” said Allen, a 2000 Lehigh graduate. “There they found additional details and ordered a biopsy. I live on the Oregon coast and had to go to Portland for a biopsy in January.”
Everyone with their family

The former Lehigh women’s standout basketball player experienced this health crisis without her husband, who is in the Coast Guard and on patrol.

“In my head I was still thinking it was just a cyst … it’s benign,” she said. “I didn’t tell him I would do that [biopsy] because I didn’t want to add a worry. I said to myself that if I find out more I’ll tell him. “

Unfortunately the time came when the subject could not be avoided.

“The radiology director did my biopsy,” said Allen. “When he finished the biopsy and they were cleaning up, he came over and said, ‘Christina, I am very concerned about what I saw.’

“I could call my husband after the biopsy.”

That call came on January 7th.

“The results the next day confirmed that the cells were cancerous,” said Allen. “They then had to do more tests to check the prognosis. I found that I was stage 3 and HER2 positive, which is an aggressive cancer – usually in younger women, but very curable.”

Everyone noticed the word curable. That was all she had to hear. She used her competitive nature, which was triggered at a young age – also during her time as a sports student at Lehigh.

“You will challenge me, I will find out how to fight and defeat it,” she said. “This is the biggest challenge I’ve had in my life so far. I’ll fight it and do everything I can to overcome it.”

A good example of what she can do is her treatment plan.

“Typically, with my diagnosis and prognosis, they put on a 12-week course of four medications given every three weeks for a total of four cycles,” Allen said. “It worked. It worked and it fought cancer.”

Allen heard of something she could do and took the opportunity to participate in a clinical trial.

“The treatment plan is 12 weeks,” she said. “I get the chemopharmaceutical Taxol every week. On Wednesdays I go to Portland every week. I also get Keytruda (the investigational drug) and Herceptin (which works against HER2 cancer) every three weeks.”

Allen could have used the standard of due diligence – which has been proven effective – but wanted to do everything possible to exceed it.

“When my oncologist mentioned the process, she must have seen it in my eyes,” said Allen. “I wanted to exhaust all possibilities and find the best for me.” “Christina has always been a competitor on the pitch. It’s no surprise that she is focused on working out a game plan to win this fight,” said Troyan. “That is what the competitors do.”

Allen actually has two larger tumors on her left side and another mass in her lymph nodes.

“One tumor is grade three while the other is grade two,” she said. “The two larger tumors are in the breast tissue.”

Allen’s husband returned from work in time for the start of chemotherapy on February 3rd.

“It worked,” she said. “We had to process it together. We just had to be together and I needed a hug from him.”

The support has already proven invaluable and will continue to prove invaluable as Allen progresses through the next few weeks and months of treatment.

“I’m going to lose my hair, but it will grow back,” she said. “I’m just focusing on getting rid of this cancer. My husband is already shaving his head, so he shaved mine on February 14th. It was a powerful experience, but emotional. I heard that most of the hair is going to fall out Day 14 of chemotherapy so I wanted to shave her before that happened. “

“I think I can do the second phase on site, which will take another eight weeks with different medications,” she said. “I’ll have an operation, a double mastectomy, and then a reconstruction. I’ll get radiation after the operation. The entire trip could be a year and a half, then follow-up exams.”

Allen’s situation understandably brings fear, but one thing that will help fight it off is supporting and reassuring people around her. “I feel in really good hands,” she said. “I have some really good doctors who all work together.”

Allen is also supported by her Lehigh family. Today’s Mountain Hawks will play their Pink Game against American this Sunday and dedicate the game to her.

“Coach Troyan called to tell me about the Pink Game and I was blown away,” said Allen. “I’m very honored to know that the girls who play their hearts on the pitch dedicate the game to me.”

“Christina and I have spoken a few times in the last month,” said Troyan. “She is grateful for her Lehigh family and the relationships she built over 20 years ago. That love and support will be important as she progresses through the next stages of her treatment. I know she is on an alumni zoom -Call next week with her former delighted teammate and coach. “

Allen is two decades away from Lehigh and has created another “game plan” to fight cancer. The plan has a number of steps including a strong support system.

“It’s important to take the time to edit,” she said. “Take the time to cry. Take the time to hug who you want to hug. Then don’t be afraid to reach out to people. The love and support I get from all my family and friends has been that.” best part of this trip so far.

“You need your support group,” Allen continued. “I need someone to drive me to Portland every week. If I hadn’t spoken to people it would have been more difficult. My best friend from Lehigh – Kelly (Collins) Romanczuk – has set up a caring bridge position for me.” Such a gesture may be simple, but it goes really far. It reminds everyone that she is not alone in this fight.

“Kelly put together a video that I saw when I started my first chemo,” she said. “The love that poured in was amazing. It brought me smiles, tears and I felt a lot of support.”

Allen’s overall positive outlook is an important step in her game plan for fighting cancer.

“I’ve heard that having a positive attitude makes a big difference,” she said. “That’s part of the treatment.”

On the other hand, it is also important to recognize negative emotions and process them in a healthy way.

The diagnosis also added perspective to everyone, which is really important.

“Before, when one of my children spilled something, I wasn’t upset that something was spilled, but [frustrated] I have to deal with it in addition to other things that might have happened that morning, “Allen said.” Now I think it’s okay. The little stuff just isn’t worth stressing out about. “

Everyone remembers again and again that their current state is only temporary.

“Modern medicine has come this far,” she said. “I’ll live for many years after that. Many, many decades. It’s scary, it’s okay to be scared, but all I remember is that I’ll make it through.”

Do you want another sign of hope and optimism?

“I was number 45 in Lehigh and sat in chair number 45 on my first day of chemotherapy,” she said.

It was a sign that the Lehigh family was with her on day one and will be with her every step of the way.