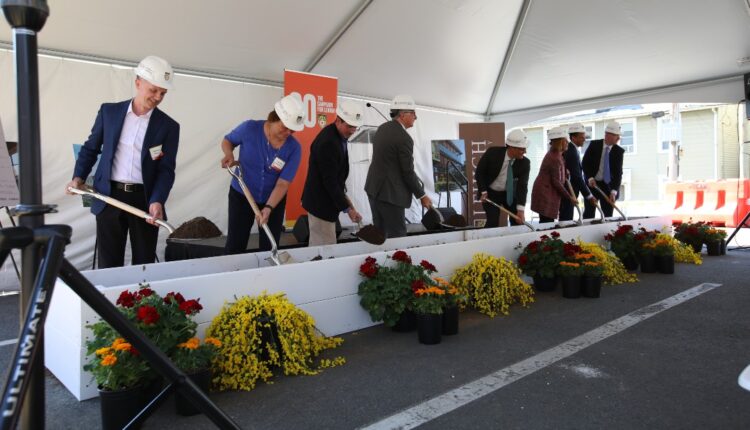 Phillips thanked the donors for their generosity in building the building and President John D. Simon ’19P and Board of Trustees Chairman Kevin L. Clayton’ 84 ’13P for their partnership and support of this vision. She held up a piece of limestone, indicating that the limestone used for the building came to Lehigh via a Lehigh MBA alumnus in Indiana. Among the donors in attendance were Sanjay Shah ’89MBA, whose early contributions founded the Vistex Institute, and Ted Walsh ’88, who, in recognition of his generosity, will have a classroom in the building that has been named.

In his remarks, Lehigh trustee Jeffrey Bosland ’88 ’22P, Senior Managing Director of the Financial Institutions Group at Cerberus, explained to the participants that his Lehigh education “means so much in my life” and gave him the basic tools in finance, Accounting, marketing and management that he needed to be successful in the business world. Bosland graduated from Lehigh with a degree in finance; his son Andrew is a current student.

A champion of the College of Business and a first-generation student, Bosland was instrumental in setting up Lehigh’s first Financial Services Lab in the Rauch Business Center. In recognition of his and his wife Debra’s support, the expanded laboratory in the new building will be named Bosland Financial Services Lab.

Over the course of his career, Bosland told attendees, the financial world has become more and more global and new and improved skills are constantly required. He said the College of Business has also evolved, providing students with the data and technology skills and global perspective needed to keep pace with an increasingly complex business world.

Bosland, along with President Simon and Speaker Christopher Scott ’94, Morgan Stanley General Manager, praised Phillips for their vision and leadership. “She’s a brave, unwavering leader, and her passion for this project shows,” said Scott, a champion of the college. A classroom in the new building will be named in recognition of Scott’s generosity.

McKay Price, who holds the Collins Goodman Chair in Real Estate Financing at Lehigh and is the director of the Goodman Center for Real Estate, said Phillips reached out to him in 2015 to create and lead a task force to look into the The college’s space requirements and brainstorm what would be needed in the new building.

The College of Business has grown significantly since the Rauch Business Center opened in 1991. Enrollment increased 43 percent, faculty 38 percent, and new programs, including FinTech minor and executive education, have been added.

“We knew we needed space,” he said, “but not just any space; We have tried to create the best space for teaching, research and service for the foreseeable and as far as possible unpredictable future. “

He said the process included surveys and focus groups with students, faculties, and staff, as well as discussions with alumni, industry professionals, and parents.

Watch a live stream of the construction site stream.lehigh.edu