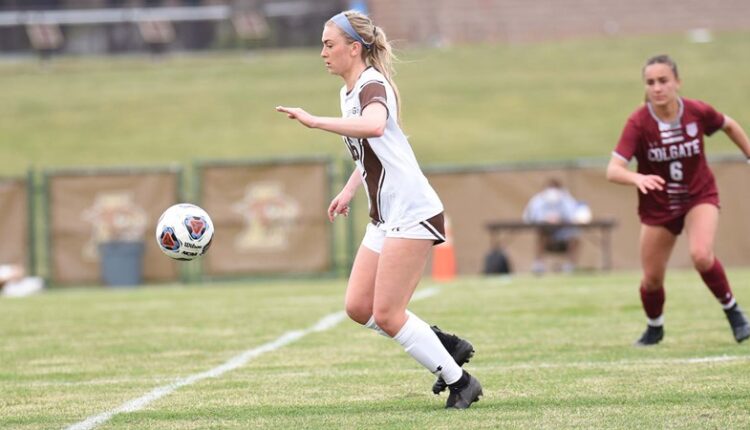 Lehigh and Colgate Play to 1-1 Draw on Senior Day

BETHLEHEM, PA. – Lehigh women’s junior Rebecca Van Siclen only scored 2:29 in the game but Colgate equalized in the 33rd minute en route to Saturday’s 1-1 draw. It was Senior’s Day for the Mountain Hawks as the program’s seven seniors were recognized prior to kick-off. Lehigh is now 1-1-2 in the season, 1-0-1 in the South Division ahead of a major matchup at Navy next Saturday.

Colgate fired the game’s first shot in just 16 seconds, but the Mountain Hawks responded with the next four. In the third minute, Junior Courtney Supp jumped into Van Siclen on the right and she did the rest, beating goalkeeper Sophia Boggs to give Lehigh a 1-0 lead.

“It’s a great goal,” said Lambinus. “We took the ball far, we attacked, we didn’t settle, and we put the ball in a good place. We did it three or four more times. We created a number of chances, but as the game progressed I thought we did achieved some. ” bad habits of being too right in the middle of the field and not being decisive enough in the last third to get balls in good places. “

Check out Rebecca Van Siclen’s goal in today’s clash against Colgate. Great pass from Courtney Supp to prepare her for the opportunity and Van Siclen did the rest. Pic.twitter.com/yYL7QalE3f

Less than a minute after Van Siclen’s goal, Supp himself had a shot on goal, which was stopped by Boggs. Perhaps Lehigh’s best remaining chance came from freshman Ava Schaller’s foot in the 25th minute, but her shot hit the bar.

The shots in the first half were a draw at five o’clock. Colgate had an 11-3 lead in the second half, but only a 3-1 lead in the shots on goal. Senior goalkeeper Miranda Royds stopped all three shots to lead the game into extra time.

Both Lehigh and Colgate had only one shot in the 20 minutes of extra time without scoring a goal as each team scored one point in the Patriot League overall standings.

“After this [Colgate’s goal]I thought we fought for the rest of the game, “said Lambinus.” There were really good options. We defended very well, especially with some new players. Overall we fought well. In all honesty, we looked like a team still trying to figure it out. Different players, inconsistent training, so we still have some work to do. “

The last shots went 17: 9 in favor of Colgate, while the Mountain Hawks had a 5-4 advantage at corners. Royds finished with five saves for Lehigh while Boggs made two for Colgate.

The Mountain Hawks will be back in action for a major South Division matchup at Navy next Saturday. The opening start is scheduled for 6 p.m.

“We played better in every game and had some really good moments,” said Lambinus. “We have to take one more step.”