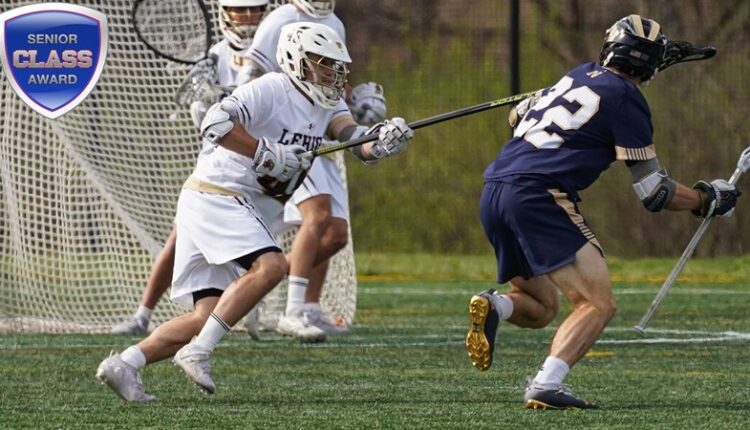 BETHLEHEM, Pennsylvania – Lehigh Men’s Lacrosse Senior Teddy Leggett was recognized as a Senior CLASS Award First Team All-American late last week. The recognition means that he was among the 10 finalists in the top 5 of the Senior CLASS Award voting. Jake Carraway of Georgetown was named the winner, while Charlie Bertrand, Virginia, Chris Gray, North Carolina and Ryan Smith (Robert Morris) joined Leggett on the first team.

Leggett became Lehigh’s fourth finalist in program history, with all four named to the first team. The others were Jonathan Stumpf (2011), Ty Souders (2014) and Craig Chick (2019).

No finalists were named in 2020 due to the COVID-19 pandemic, so the Mountain Hawks have presented a finalist in each of the last two seasons. The only other program that can say that is Virginia.

Lehigh has a long history of receiving the Senior CLASS Award. In 2021, Leggett and Conor Gaffney were the only two Patriot League candidates. The Mountain Hawks have had at least one nominee in eight of the past nine years (with eleven honors during that time). Lehigh is also the only men’s lacrosse program in the country with multiple awardees for three consecutive seasons.

Gaffney and Andrew Pettit were both named as candidates last season (Gaffney was eligible to compete again in 2021 as he returned for a fifth year after the pandemic canceled the 2020 season). The year before, Pettit and Craig Chick were both candidates (when Pettit returned to Lehigh for a fifth year due to his injury at the end of the 2019 season, he could be nominated again for the honor).

To qualify for the Senior CLASS Award, a student athlete must be classified as a senior in NCAA Division I and have demonstrated remarkable performance in four areas of excellence: community, classroom, character, and competition.

On the field, Leggett was named to the All-Patriot League for the third time in 2021 and ended the season with a team high of 15 caused sales along with 43 groundballs (good for second place with the Mountain Hawks). Leggett was an important part of Lehigh’s faceoff game, which was No. 1 nationwide, when Mike Sisselberger broke the NCAA Division I record for faceoff percentage (79.5). Leggett owns 209 career groundballs, making it sixth in program history.