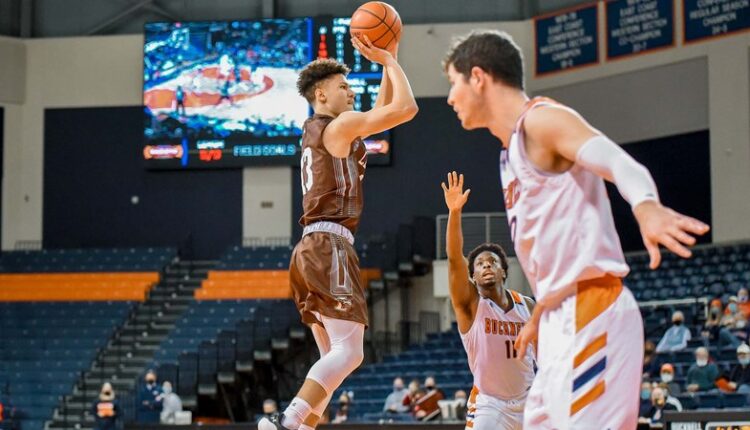 BETHLEHEM, Pa. – Following a week highlighted by a career-high 26 points and nine assists in a convincing win at Bucknell, Keith Higgins Jr. of Lehigh men’s basketball has earned his second straight Patriot League Rookie of the Week award, as announced on Monday. Higgins becomes Lehigh’s first back-to-back Patriot League award winner since Tim Kempton was named Player of the Week consecutively in January of 2017. Higgins is the Mountain Hawks’ first consecutive Rookie of the Week winner since Kahron Ross in February of 2015.

Higgins averaged 15.0 points over three games last week, highlighted by a career-high 26-point effort at Bucknell Thursday. He also had a career-high nine assists with zero turnovers. Higgins scored 16 of Lehigh’s first 18 points, all coming in the game’s first 6:51, finishing 10-of-17 from the floor and 6-of-9 from 3-point range.

The West Hills, California native also posted 12 points against Holy Cross Monday and seven vs. Loyola Sunday. In Patriot League play, Higgins is averaging 15.7 points per game, which is second on the Mountain Hawks – only behind Evan Taylor.

📹@keith_higgins15 did just about everything last week to earn his second straight @PatriotLeague Rookie of the Week honor. #AllIn pic.twitter.com/UxAoDE0Dro