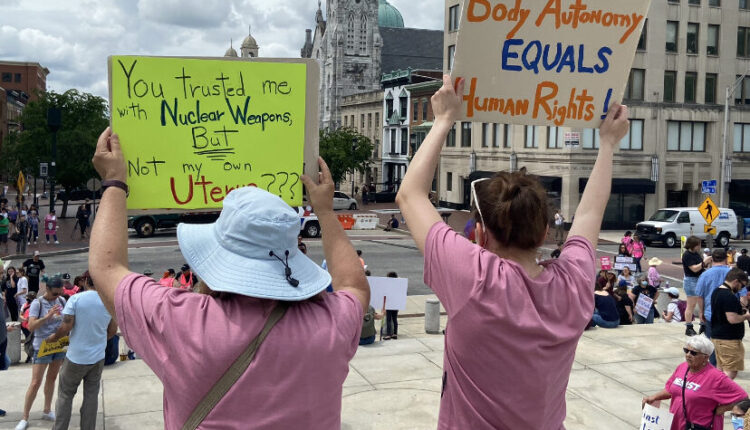 (*This developing story will be updated)

The U.S. Supreme Court — with a conservative majority — on Friday ruled in favor of a Mississippi law directly challenging the landmark Roe v. Wade decision by making most abortions illegal after 15 weeks of pregnancy.

The decision, written by Justice Samuel Alito, is the highest court’s most consequential decision on abortion rights in decades, leaving decisions about abortion and its legality up to states.

“The Constitution does not confer a right to abortion; Roe and Casey are overruled; and the authority to regulate abortion is returned to the people and their elected representatives,” Alito wrote in the opinion.

Here’s how Pennsylvania’s elected officials reacted to the news on Friday.

As long as I am governor, I vow to protect abortion access and reproductive health care in Pennsylvania

I cannot stress enough how important it is to vote. Elections matter.

U.S. Sen. Bob Casey, D-Pa.: “Today’s decision upends almost a half century of legal precedent and rips away a constitutional right that generations of women have known their entire lives. This dangerous ruling won’t end abortions in this country, but it will put women’s lives at risk. And make no mistake—this is not the end goal, it’s just the beginning. Republicans in Congress want to pass federal legislation to completely ban abortion. Our daughters and granddaughters should not grow up with fewer rights than their mothers.”

U.S. Sen. Pat Toomey, R-Pa: “The U.S. Supreme Court’s ruling on Dobbs v. Jackson Women’s Health Organization restores the American people’s ability to determine abortion laws through their elected representatives, as the Constitution requires. Precedents that are wrongly decided should be overturned, just as Brown v. Board of Education was right to overturn Plessy v. Ferguson. This ruling is a win for the unborn, the Constitution, and democratic governance.”

This is a devastating day in America.

A woman’s right to choose now depends on the state in which she lives, and the decision will be made by our next Governor.

Doug Mastriano will ban abortion with no exceptions.

I will keep abortion legal. https://t.co/a2dZY1Od2T

“Reversing Roe v. Wade is not only an attack on the right to an abortion but puts a person’s essential freedoms, including their ability to make decisions about their own body, at risk.

“The consequences of this decision are severe and far-reaching. Restricting abortion access can threaten the health of pregnant people and babies, increase maternal mortality rates and force low-income women and families to face further financial hardships.

“Abortion is an intensely personal decision that should not be regulated by the government or the interests of politicians. While attempts to restrict abortion care through legislation have gained momentum, even here in Harrisburg, I have always been a pro-choice vote in the General Assembly.

“It’s important to know that abortion is still legal and safe in Pennsylvania. I will continue to fight to protect women’s health and ensure a person’s right to make decisions about their own body without government restriction.”

The anti-abortion movement has made it clear this is only the beginning of their attack on our freedoms. Their ultimate goal is to pass a nationwide abortion ban that would block abortion access in every state in the country.

I was 13 when Roe became law of the land.

I have tears of anger — girls like my 10 year old granddaughter have less rights than me at 13. https://t.co/cP9REBTYrv

It is rare in the United States for millions of Americans to wake up with fewer rights than they had the day before, but that is precisely what the Court has done today.

Overturning Roe goes against the will of the American people, and we will fight back. https://t.co/kWwcNx3QkJ

Roe was settled precedent for nearly my entire life—60% of Americans want it upheld.

So let’s call the SCOTUS ruling for what it is: a blatant attack on our freedoms.

I’m thinking of all those immediately, and personally, affected by this decision.

And please know this – I will stop at nothing to stand up for your right to access comprehensive reproductive health care, and the freedom to choose.

2/2: I have always voted to protect the ability of women and their families to make these personal healthcare decisions for themselves and I will continue to do so as long as I serve the people of Northeastern Pennsylvania.

U.S. Rep. Fred Keller, R-12th District: “Today’s historic decision ushers in a new era of prolife protections for the unborn not seen in half a century. I commend the Supreme Court for its fortitude—amid threats of attacks and harassment from the radical left—to make the right decision and return this issue back to the states where it belongs. Most importantly, this ruling invalidates Roe v. Wade which was wrongly decided nearly 50 years ago.

“Nothing is more important than life. Our Creator has a plan for every single one of us, and I will continue to fight in Congress against the left’s attempts to pass extreme legislation that allows for late-term abortions and taxpayer funded procedures.”

U.S. Rep. Mike Kelly, R-16th District: “Today’s ruling is a major victory for the pro-life movement, but our work has only begun,” Kelly said. “All little boys and little girls deserve a chance at life, and this ruling ensures they will get that chance. The right to life is not just for some of us. It is for all of us.

“I want to speak directly to those who have had abortions and struggle with their decision: you should know that forgiveness and grace – for yourself and others – will help heal those emotional wounds. As we move forward, I encourage everyone to remember a core tenet of this country that still holds true today: each of us has the right to life, liberty, and the pursuit of happiness.”

“I am disheartened by the Supreme Court’s decision to strike down Roe v. Wade. Despite today’s action, Senate Democrats stand firm in our commitment to do everything we can to preserve and maintain legal and safe access to abortion in Pennsylvania.

Abortion is healthcare. Any decision by the Supreme Court to take away healthcare and an individual’s bodily autonomy is, in our opinion, a violation of the Supreme Court’s authority and interpretation of our Constitution. The fact that this is the first time SCOTUS has taken away a fundamental constitutional right—a right that has been in place for nearly 50 years – illustrates the unprecedented and misguided nature of this decision.

The overturning of Roe is not only an extreme disappointment, but it is completely out of step with what the majority of Americans support, including here in Pennsylvania. When reproductive rights are threatened, women’s healthcare on all levels is at risk.

Instead of restricting healthcare for women, Senate Democrats are committed to making the healthcare system work even better for women and their specific health needs. Instead of stripping women of their rights and opening the door for others to lose fundamental rights as well, Senate Democrats will use our positions to identify real health challenges and solutions for women in this Commonwealth. Proactive, unbiased, convenient, and supportive healthcare can easily be a reality for women, and we will continue to make it a priority.

While this is a sad day for our country, we will remain steadfast in our resolve to preserve and protect the rights and safety of women in our Commonwealth.”

“Today’s U.S. Supreme Court decision will hurt women’s access to health care, disproportionately harming people of color and those struggling financially. While abortion is still safe and legal here in Pennsylvania despite the court’s decision, the truth is the commonwealth is one vote away from criminalizing women’s health care and the dire consequences that it would prompt – higher maternal mortality rates, spikes in unsafe abortions, and the prosecution of doctors and nurses who provide necessary health care. Because let’s be honest: outlawing abortion doesn’t stop abortion.

“Republicans have been working for decades to reverse Roe and already have bills ready for a vote that would cut access to care. House Democrats, on the other hand, have a plan to enshrine reproductive freedoms in the state Constitution and to protect our providers from having to fear arrest for simply providing care. A majority of Pennsylvanians support access to safe health care, but, sadly, the political reality is that Republicans are more worried about the special interests than people. That means their bills will be rammed through the legislature, while our bills to do what the people actually want will never be considered.

“We’re not done fighting for people to be able to make decisions about their own body. In the meantime, we will work to shore up access to care in our communities that anticipate an uptick in women from neighboring states seeking safe health care and to protect our health care providers from legal action for doing their jobs.”

State Rep. Mike Schlossberg, D-Lehigh: “The ruling by the Supreme Court of the United States is disappointing and frightening. It obliterates the constitutional protection for a woman to make decisions regarding her health. It sets the foundation to make contraception illegal and even opens the door to erode marriage equality. Make no mistake: the American constitutional promise of medical privacy is under attack in this country. This is not the end game. This is a starting point. And it’s why I condemn this ruling in the strongest possible terms.

“Also make no mistake: in Pennsylvania, these constitutional protections still exist. Abortion is still legal in Pennsylvania … for now. I fear we are a turning point after decades of attacks have not changed access to safe and legal abortion in Pennsylvania. As long as I am a state representative, I will continue to fight with every fiber of my being to ensure that reality continues. I will stand with the millions of Pennsylvanians who know decisions about abortion must NOT be made by politicians. I will stand with every woman who must make the difficult decision based on who she is and what she believes is in her best interests when it comes to her reproductive freedom. I will stand against every politician who seeks to impose their will on other people in the name of whatever cause prompts them to do so.”

Roe overturned: What you need to know about the Supreme Court abortion decision | Analysis