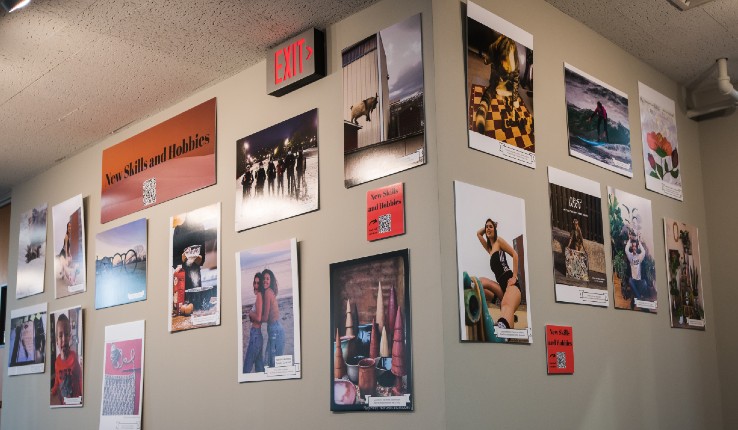 “I’m going to be my grandma,” said PhD student Sophie Rizzo about her contribution. The photo showed Rizzo knitting with curlers in her hair.

Rizzo’s poster was one of over 50 submissions to Lehigh’s “Say it in Six” contest, a program hosted by the Office of Graduate Student Life that allows students to display a meaningful photo along with a six-word memoir to To hold onto an aspect of her Lehigh experience as a graduate. The posters will be on display at the Fairchild-Martindale Library through June.

“I recently started knitting because of quarantine and I remember sitting on my bed bending over to knit,” said Rizzo, who is working on her PhD. in chemistry at Lehigh. “And I’m wearing this full tracksuit, that’s in the picture that a grandmother must have owned in front of me, and it was just a very hard realization for me.”

Rizzo submitted her poster in the “New Skills, New Hobbies” category and won first place in that category. The other two categories of the competition selected by PhD students were “Who Inspires You” and “Distant but Connected”.

The Office of Graduate Student Life has hosted the poster competition for the past two years. Members of the Lehigh community could vote for their favorite posters online.

Kathleen Hutnik, assistant dean for PhD student life, says the idea was borrowed from the University of Alabama in Birmingham, which also asked PhD students to describe some aspects of their experience with just one picture and six words.

Hutnik said the theme of last year’s competition was more aimed at academics. This year, given the challenges of the pandemic, the program focused on more personal categories.

Hutnik said her students and colleagues said they were feeling a loss of purpose as a result of the pandemic. She said the students likely picked the categories because they were the areas they wanted to think about.

One goal of the project was to feed the student community.

Ugochinyere (Nancy) Obioha Oloyede, who completed their Ph.D. In chemistry, the competition was a great way for PhD students to network while still taking distance learning. She said she appreciated how easily she could refer to the contributions of the other students.

Oloyede’s picture, titled “Working but Hearts Over the Sea” in the “Far but Connected” category, showed a collage of photographs of her traditional wedding ceremony in Nigeria next to a laptop showing her research in the chemistry department.

Oloyede said she first met Lehigh when she read a professor’s published research and loved the concept. She discovered that the professor was from Lehigh and decided to apply to Lehigh to continue her studies.

“I can say that this was one of the best decisions of my life. I really love it here, especially our community of PhD students, ”said Oloyede.

Oloyede said one thing she really appreciates is the resources that the graduate school has to offer.

“Of course everyone has to assert themselves with their academics and their jobs, but I have the feeling that this kind connects us with our humanity again,” said Hutnik.

The winning posters are:

Overall winner: Ana Ferariu, “Catch waves or do your homework”

Winners of new skills and hobbies: Sophie Rizzo, “I’m going to be my grandma”

Distant but connected winner: Meghdad Razizadeh, “Feel separated but close to your heart”