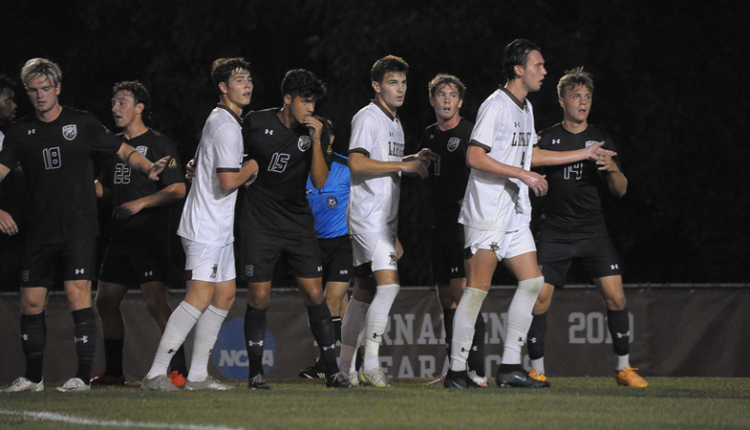 The loss drops the Mountain Hawks to 0-6-1 to start the season as the team returns to the Patriot League at American on Saturday.

“I told the team at halftime that in my 30 years as coach at Lehigh this was one of the worst 45 minutes of football I’d ever seen on any of my teams,” said Dean Koski, Ingrassia Family Head Soccer Coach. “Only in terms of heart, character, commitment, teamwork was it really disappointing. I was incredibly disappointed with most of the starting XI and we weren’t ready to play tonight. That was really disappointing.”

“I was very happy with the guys who got promoted in the second half and guys got some playing time who didn’t play much and I thought they played like we should have played in the first half. Unfortunately, they are the guys we didn’t think we needed them and now we might need them because a core of our starters and some of our key players haven’t played with the dedication they need to be successful. “

Lehigh had blocked two headed shots in the opening three minutes before UMBC scored their first goal of the competition when Calheira gave the Retrievers (5-2-1) a 1-0 lead after a goal supported by Ryan Becher and Iago, Lott.

Calheira hit the net for a second time in the 10th minute, a header from Julian Conze-Helfer.

Hassane Diakho had Lehigh’s first real chance of the competition in the 19th minute when he hit the crossbar, two shots from Trevor Koski and Jack Sarkos missed.

After Calheira missed a shot on the 25th, he got through with a hat trick on the 26th after Conze’s submission.

In the last six minutes of the first half, the Mountain Hawks fired three shots, which were blocked by the UMBC keeper.

Similar to Saturday’s loss to Loyola Maryland, Lehigh dominated the attacking third in the second half, knocking out the retrievers 12-4 in that period. Of those 12, five were on goal, including two in the last minute when the team tried to score at least one goal to avoid the shutout.

Lehigh is without a win in his first seven games for the first time since 2012 (0-7). UMBC are now leading the all-time series, 3-2 between the two sides.

The Saturday afternoon matchup with the Eagles starts at 2 p.m. and will be broadcast live on ESPN +.

Back to School Review: Five Days of Education Policy in Pennsylvania | Opinion