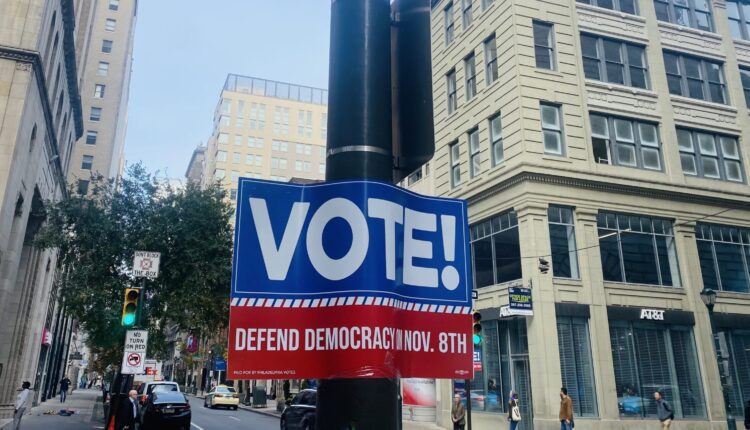 Election Day was a win for truth, democracy and opportunity | Jill Sunday Bartoli

Billions of dollars were recently spent on negative political ads telling citizens to be afraid of crime and the economic crisis, and to blame the Biden administration for both. My faith is restored in the American people who saw through the lies and defended truth with their votes.

The economic crisis is a world-wide phenomenon, and it is actually less severe in the United States than in other countries.  The factors behind the economic crisis include the legacy of the COVID-19 pandemic, trillion-dollar tax cuts for the super-rich, supply chain shortages and a host of other domestic and geopolitical factors unrelated to who is currently in power.

It was the Biden administration that sought to get money into the hands of struggling families with the Build Back Better Act, which was labeled socialism and rejected by the opposing party, who would rather cut taxes on billionaires and huge corporations who were making all the money (dark money that bought the attack ads?).

Over the past two decades of cutting taxes on multibillion-dollar corporations and the super-rich by Presidents George W. Bush and Donald Trump, money has continued to flow to the top .01 percent, while our middle class and lowest income citizens have suffered.  This has nearly ruined our democracy and diminished hope for a better life for those left behind.

MAGA Republicans are so used to lying and not being challenged that they continue to deceive and manipulate the truth to hold their power. Their autocratic and violent rule would ensure continued economic inequality, little investment in education and continued domestic terror. They want to ban the books and ban critical thinking so the masses can continue to be manipulated.  But truth and freedom won.

Research tells us that behind much of our crime is hopelessness and despair from not being able to feed one’s family or have any chance of making a decent living. Too many of our poorest citizens experience the American Dream as a nightmare. They see that working hard does not get you ahead when wages do not add up to the fundamental expenses of living and raising a family.

Basic expenses of housing, childcare, transportation, healthcare, food and clothing are beyond the reach of too many working families, and MAGA Republicans refusal to address any of this has pitched people into desperation.

This election season, vote like our democracy depends on it | Jill Sunday Bartoli

Caring about our families in great need is not socialism.  It is the right thing to do.

The division and disunity promoted in political attack ads and rallies has prevented the kind of unified humane response our citizens exercised during World War II.

We understood then that a united effort to support our allies who were fighting for their lives, as the Ukrainian people are now, meant common sacrifice. We built victory gardens and we gave up nylons and other unnecessary expenses to show unity and save resources to share with our allies.

Now it is a blame game with no vision of shared sacrifice or a common struggle for democracy over autocracy.

The US has the highest incarceration rate in the world.

U.S. prisons are overflowing with people in poverty:  are we back to the English poor people’s prisons?

U.S. prisons are disproportionally filled with Black and brown citizens who have not been served well by our education system.

U.S. children, as early as age 10, are herded into vastly overcrowded juvenile prisons to await a trial.

As of 2019, the U.S. spent more on prisons than it spent on education.

Three strikes laws, with crimes as minor as stealing a Bambi video or diapers, keep U.S. citizens incarcerated for decades.

U.S. prisons are often privatized, with the goal of making money—not rehabilitation, not nutrition or healthcare, not humanity.

We have seen “soft on crime” as an accusation by legislators whose goal is to maintain the profitable, multibillion dollar prison industrial complex for their donors. Books such as David D. Cole’s “No Equal Justice” and Michelle Alexander’s “The New Jim Crow” have documented how terribly hard we are on crime—especially if you are poor, Black, or brown.

Shapiro, Senate Republicans will have to work together. Can they do it? | Ray E. Landis

Can we rise out of this morass to be the United States of America with liberty and justice for all?

Historically, our resilience has brought us out of deep divisions.  We emerged from isolationism prior to entering World War II, and we sacrificed together with our allies in defense of democracy, as we are doing with Ukraine.

As a society we continue to rise out of segregation and white supremacy, learning to better understand and support each other as fellow human beings.  As we work hard to not repeat the errors of our past and to be true to our highest democratic ideals we will rise again.

We will embrace truth—not lies, and we will call out those who attempt to deceive, confuse, and manipulate us.  Because we are indeed the United States of America, continually growing, learning, and yearning to build a safer, kinder world that embraces and supports everyone.

‘An Arm and a Leg’: When Insurance Won’t Pay, Abortion Assistance Funds Step In