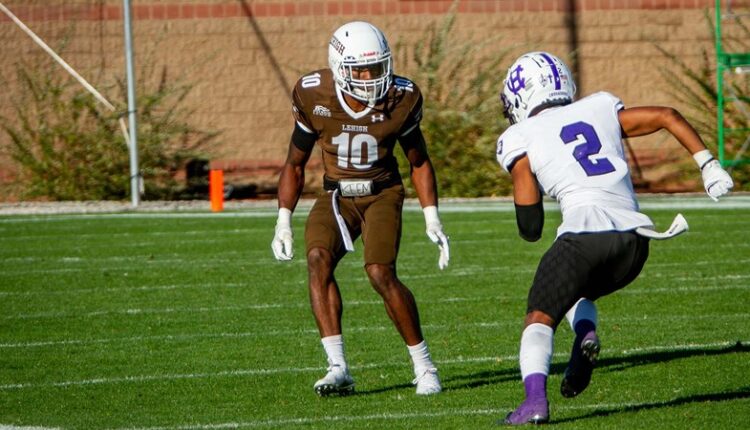 BETHLEHEM, Pennsylvania – The youngest Lehigh football graduate Divine Buckrham has been named a male recipient of the 2020-21 Patriot League Award of Outstanding Leadership and Character, the league announced (Thursday). Buckrham and the winner, Abby Kapp, the Bucknell basketball player, were selected by Senior Woman Administrators (SWA) from all member institutions of the league.

The Patriot League created the Award of Outstanding Leadership and Character to honor and honor individuals who demonstrate excellence in leadership and service while participating in the Patriot League athletics. Since the 2011-12 awards ceremony, one male and one female student athlete have been recognized.

Any student-athlete or team in the Patriot League is eligible for the award provided the minimum standards of conduct are met. The definition of leadership and character for this award includes one of the following ideals, among others: proven leadership in the “field” of the competition and within the campus community; promotes a leadership vision to improve one’s own team or teammates; Mentoring from teammates; Role model on campus; active participation in on-campus projects and / or community service; Perseverance in overcoming hardships; Demonstration of trustworthiness, respect, responsibility, fairness, caring and citizenship.

Buckrham was a starter in the Mountain Hawks defensive backcourt for four years and served as team captain in the Spring 2021 campaign. Throughout his time in Bethlehem, he was recognized as an executive by his teammates and coaches, and won the Athletics Department’s John A. Cable Award for Outstanding Male Graduate in convening the Year-End Student-Athlete Awards. However, the rest of the campus became aware of his voice during his senior year.

The Queens, NY native was not new to leadership. As a three-year elected member of the Lehigh Football Leadership Council, he was used to speaking weekly to the coaching staff on behalf of his teammates. He also helped start a Lehigh chapter of Uplifting Athletes, where he served as vice president for the organization that aimed to raise awareness of the rare disease community through the DI college football platform and raise money to collect.

“Divine is one of the hardest working, most motivated, and all-round student athletes I know. He is a leader of the football team on the field, on campus, and in the community,” said Mike Kashurba, Lehigh Defensive Coordinator. “He was a voice of positivity, encouragement, and resilience during the challenges of COVID-19. Divine was there to support and encourage his teammates and staff by canceling spring training, the traditional football season, and closing in the fall, also providing an important bridge between the staff and the players, showing why he is relied on by his teammates and coaches The team’s captain was elected. “

During a turbulent year, Buckrham gave an important voice and perspective to the Lehigh campus talks on social and racial justice.

Buckrham won a university-wide competition for anti-racist creative ideas from Lehigh University. His suggestion? The idea of ​​creating “Student-led Freshmen Seminars” to create spaces where students can have honest, open conversations with their peers, to talk about race in America and how it can contribute to meaningful change.

Although his work in this room wasn’t limited to his ideas. Buckrham also served as Chairman of the Diversity and Inclusion Committee and a member of the Electoral Committee of the Lehigh Undergraduate Student Senate. In this role, he worked to foster a diverse, inclusive, and equitable community in Lehigh while speaking to the University’s Board of Trustees on diversity and inclusion.

On campus, Buckrham was elected as one of two undergraduate students to an advisory committee to initiate and direct a review of the Lehigh University Police Department (LUPD). Buckrham and his counterpart were tasked with strengthening relations between the LUPD and the racial and ethnic minority communities in Lehigh and the surrounding community.

Within the athletics department, Buckrham helped colored coaches organize the first Lehigh Student-Athletics of Color (SAOC) group to create an inclusive and supportive environment. He also worked in the Visions subgroup of the Lehigh Athletics DEI Alumni Relations Group to create a more diverse, inclusive, anti-racist and fairer environment.

“I don’t know how he has time to do all of this,” said Kashurba. “Divine has presented to the Board of Trustees. He has studied abroad. He has worked at all levels of the university and the sports department, was team captain and leader, and worked for charity. He did all of this while taking a full-time course load as a Double major in Psychology and Health, Medicine and Society. On a personal level he has become like family to me, my wife and sons. My boys enjoy coming to FaceTime with Divine and I love to that they have him in their lives to look up to. Divine is about making everyone better and making this world a better place. He’s a true ambassador for our program and our school. “

Buckrham is the sixth Lehigh student athlete and the third soccer student athlete to win the Patriot League Award of Outstanding Leadership and Character. Quarterbacks Chris Lum ’12 and Michael Colvin ’13 were the male winners for the first two years of the award’s existence.