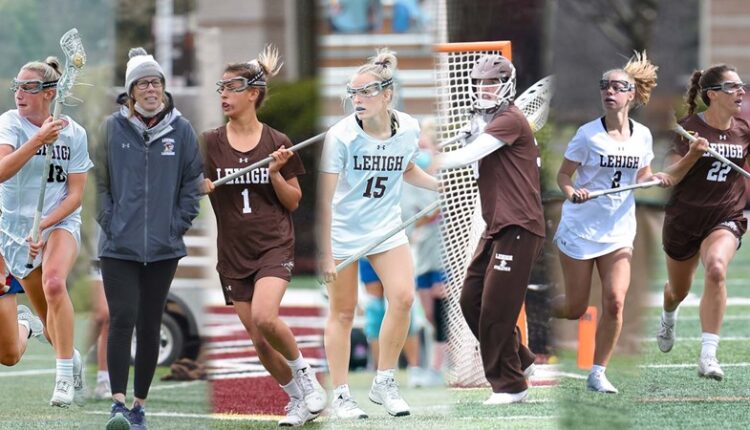 BETHLEHEM, PA. – After an impressive regular season, six members of the Lehigh Women’s Lacrosse Team received All-Patriot League recognition on Monday, while PhD student Sondra Dickey and head coach Jill Redfern were named League Midfielder and Coach of the Year. The six winners are most of the Mountain Hawks since 2010, when they also had six. It’s the second most popular in program history, and the most since the Patriot League expanded with the addition of Boston University and Loyola in 2014.

Dickey becomes Lehigh’s first midfielder of the year since another of the program’s greats (Lauren Dykstra) won her in 2011. The Coach of the Year is Redfern’s third of her career and the first since 2011. Redfern has three of the five Lehros Lacrosse Women named Patriot League Coach of the Year.

Dickey was also named the All-Patriot League first team for the third year in a row (no league prizes were awarded in 2020). This season, she was the first player in program history in the top 10 for career goals (third, 194), assists (ninth, 55), points (fourth, 249), groundballs (seventh, 139), draw controls (first, 246 ) and generated sales (bound for first, 103). This season, Dickey leads the Mountain Hawks and the league in generated sales (26) and leads the team on points (39 behind 33 goals and six assists). Dickey leads the team in the draw this season (47) and has won seven weekly Patriot League awards in 2021 (six midfielder of the week and one defensive player of the week). The six midfield and seven overall awards have tied a Patriot League record for one season, while their weekly awards are a Patriot League record for 15 careers. On April 20, she was also named IWLCA Defensive Player of the Week.

Sophomore Gabby Schneider, who is third in points (18 goals, 18 assists) on the Mountain Hawks, was also appointed to the first team. She has scored several points in all but one game this season and is fifth in the Patriot League (29th at national level) in terms of templates per competition (2.0). Schneider’s highlights included recording more than 4 points in five direct league games (Army, Bucknell, Loyola, Navy, Lafayette). She scored seven points in La Salle (six goals, one assist) and six points (three goals, three assists) in Lafayette.

Schneider’s attacker colleague and classmate Emma Eberhardt received the award of the second All League team after 15 points and 22 assists in the regular season for 37 points. Eberhardt is in third place in the Patriot League (24th national) in terms of templates per game (2.20). She has a point in every game this season and has accumulated multiple points in eight of the ten competitions. One of the highlights was a six-goal, nine-point attempt against Bucknell. She also had one goal and six assists in the season opener against Drexel, who is now in the top 10 of the national rankings.

Senior Hannah Cermack, who is second in the team with 19 assists and scored 23 points with four goals (fifth on the Mountain Hawks and second among the midfielders), was also appointed to the second team. She is also second on the team at Groundballs and third at Draw Controls. With 19 assists, Cermack is fourth in the Patriot League (57th nationwide). She was named Patriot League Defensive Player of the Week after three ground balls, three turnovers and two draw controls against Navy.

PhD student Alexandra Ladda was named to the second All-Patriot League for a second season in a row. It helps anchor Lehigh’s defense, who rank third in the Patriot League on goals against the average (9.80) and have allowed seven or fewer goals in six of their last eight games. Ladda owns 11 groundballs and five caused sales in the season, including four groundballs and two caused sales in the opener against Drexel.

Senior All-League named Samantha Sagi ranks second in the Patriot League for percentage savings (47.0) and goals against average (9.87). Those numbers are good for 25th and 16th place nationwide. Sagi was named the second All-Patriot League team and was named Patriot League Goalkeeper of the Week twice – after beating Army West Point and Navy. She has stopped more than 50 percent of the shots in five of the last eight games, including stopping the first eleven she sent against the army.

The Mountain Hawks, who finished second in the South Division, will return to the field Monday afternoon to host the third-manned Navy in the Patriot League quarter-finals at 1:00 p.m. on ESPN +.

* 17 student athletes in the second team due to a vote balance.