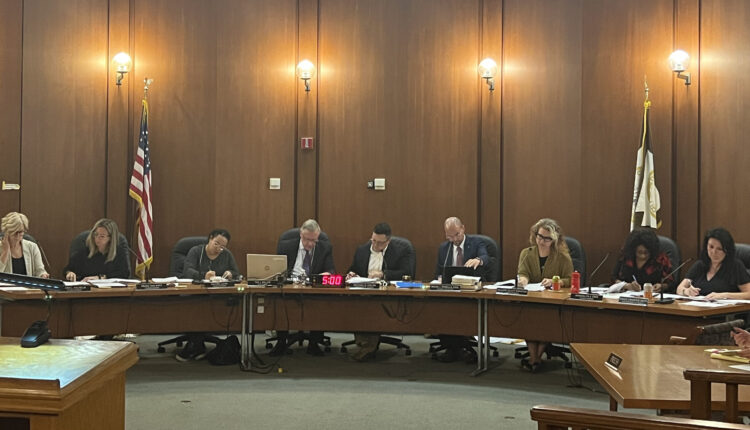 The Bethlehem City Council convened Sept. 20 to discuss topics such as the implementation of ramps for accessiblity access and the possibility of building a luxury apartment building in Historic Moravian Bethlehem known as the Skyline West Project.

The city of Bethlehem is constructing new ramps and renovating old ones to stay compliant with ADA requirements, as the US government works to create more accessible cities and towns nationwide.

During the City Council meeting on Sept. 6, council members voted on a resolution from Michael Alkhal, director of Public Works, recommending a contract change with Heim Construction Company Inc., which has been hired to design and construct curb ramps throughout the city.

This project is both expensive and difficult. According to Alkhal’s request for approval the funds provided are for “labor and materials to design and construct 89 ADA curb ramps throughout the city including installing/replacing curb & sidewalk where required in conjunction with our paving program.”

“The ramps are so much more costly than you could ever imagine,” City Council member Grace Crampsie Smith said.

Alkhal said the reason for the recommended contract change was because work on the Pierce Street water and sewer replacements project made the restoration of curbs and sidewalks along the frontage of several properties necessary.

He said The ADA ramps at East Fifth Street and Pierce Street were included in the original plan. These additional restorations are proposed to be completed under this contract, which contains these types of construction line items.

Without any discussion by council members, the Authorization for Contract or Amendment was resolved by the council on Sept. 6.

While this contract has been resolved, updating ramps and accessibility around the city is a continuous project.

“(Bethlehem) keeps getting upgraded mandates from the (federal government) regarding the regulations and the standards for the ramps,” Smith said.

At Lehigh University, the steep hills and many staircases make providing accessibility even more difficult.

Eli Atler, ’25, lives in a fraternity house on the Hill, which sits at the top of a long flight of stairs.

“I’ve noticed that there isn’t a lot of accessibility at Lehigh, like for the dorms and houses,” Atler said.

The public sector is working together to make the country, as a whole, a safer and more accessible place for those with disabilities.

According to the ADA, “new guidelines will likely address issues such as access at street crossings for pedestrians who are blind or have low vision, wheelchair access to on-street parking, and constraints posed by space limitations, roadway design practices, slope, and terrain.”

The vote on whether or not to approve the construction of a 40-unit luxury apartment building, known as the Skyline West Project, was postponed at the Bethlehem City Council meeting on Sept. 20 due to public concerns.

The Skyline West Project was initiated in 2018 when Skyline West LLC applied to demolish a house at 143 W. Broad St. and construct an apartment building in its place.

According to Skyline West LLC’s 2022 application for certificate of appropriatenessthe Historic Architecture Review Board recommended against the demolition of the house and commented on the design of the proposed building in 2018, but City Council approved it anyway.

The Skyline West Project requires use of the property adjacent to 143 W. Broad Street. After obtaining an agreement of sale, the application states “it was discovered that there were several title issues with the adjacent property” and “the remedial action relating to these title issues began in 2019 and continued through 2021.”

The location of the project, 143 West Broad St. is in the buffer zone of Historic Moravian Bethlehem, which is up for nomination by UNESCO as a World Heritage Site.

Other world heritage sites recognized by UNESCO include Independence Hall, the Statue of Liberty, the Grand Canyon, the Great Wall of China, Pyramids of Egypt and the Taj Mahal.

Quaker advised that a Heritage Impact Assessment be completed by an unbiased third party before approval or disapproval of the Skyline West project to ensure the project will not disrupt the historical significance of Bethlehem nor compromise the city’s important nomination.

According to UNESCO, these assessments are “a process of identifying, predicting, evaluating and communicating the probable effects of a current or proposed development policy or action on the cultural life, institutions and resources of communities, then integrating the findings and conclusions into the planning and decision making process.”

During his public comment, Bruce Haines, managing partner of the Historic Hotel Bethlehem, agreed with the need for an assessment and said the vote on this project should be postponed.

“I don’t think there’s any project in Bethlehem, no matter what it is, that is more important than getting the World Heritage Site nomination,” Haines said.

The other Historic Moravian sites are in Germany, Denmark and the United Kingdom.

The group is now awaiting approval of their certificate of appropriateness from the city before they can proceed with construction and authorization will depend on the construction’s impact on Historic Moravian Bethlehem’s World Heritage Status.

“We’ve been working on (the Skyline West Project) since 2018, so why not wait a little bit longer?” Enix said.

The council plans to revisit the issue at their next bi-weekly meeting on Oct. 4.