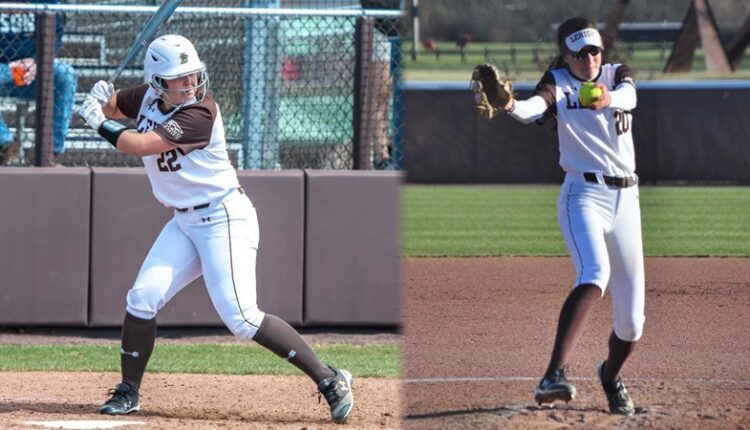 BETHLEHEM, PA. – Lehigh softball juniors Jaelynn Chesson and Gabriella Nori have been named to the Preseason All-Patriot League team, which was unveiled on Thursday. The Mountain Hawks were voted third by 52 teams in the league’s preseason poll, earning 52 points and one of 14 possible votes for first place.

The Patriot League Preseason Poll and All-League teams are elected by the league’s head coaches and sports information directors.

Chesson was a first All-Patriot League selection as an outfielder after a stellar freshman campaign in which she led Lehigh in doubles (17), home run (six) and RBI (35) in 2019, in a season that she fought against 0.359. In last year’s season shortened by the pandemic, Chesson Lehighs missed the first five games but returned strongly with six home runs, 10 RBIs and 13 runs in 12 games, hitting 0.486 (17:35).

An injury limited Nori to just 10 innings in 2020. She opened her season by allowing a four-hit run over seven innings with nine strokes against Bethune-Cookman and then throwing three innings without hits against Saint Joseph’s. Nori went 10-13 as a freshman with a 3.47 ERA and was named to the All-Patriot League Tournament team after playing 2-1 in four games with 5 allowed runs, three walks and 19 strikeouts over 18.1 innings had gone.

Lehigh took an 8-9 lead in 2020 when the campaign halted in the middle of the Arizona spring trip.

Boston University, winners of the 2018 and 2019 Patriot League titles, led the preseason poll in first place with 72 points and 12 votes. Army West Point took the other first place, pushing Lehigh one point to second. The survey behind Lehigh is rounded off by Colgate, Bucknell, Holy Cross and Lafayette.

The Patriot League softball schedule for the 2021 season is expected to be released on Friday, February 5th.

* The players are listed alphabetically by institution