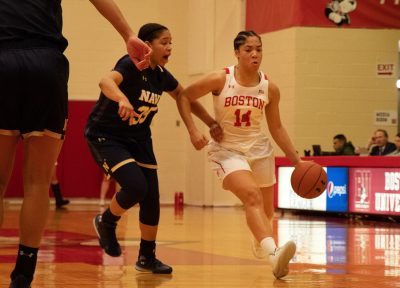 Boston University women’s basketball lagged behind in its first final of the Patriot League tournament, losing 54-64 to Lehigh University on Sunday at Case Gym.

The first quarter was dominated by the Mountain Hawks with a 10-point lead over the Terriers at the end of the 10 minutes. Terrier sophomore guard Sydney Johnson led the scoring for BU with 16 points and ended the season with an average of 11.9 points per game – almost four more than last season.

Despite this rating, some terriers, including top shooters Nelson and second guard Maggie Pina, didn’t make many shots.

“We’ve seen this kind of story before,” Moseley said in a post-game conference. “If we don’t get any shots, it’s much harder for us to win.”

Hottinger and Walker were two of three Mountain Hawks who, along with junior striker Emma Grothaus, lost 10 or more points to the Terriers.

The rest of the quarter was a back and forth between the two teams, but a series of three pointers from freshman Jamie Behar and Senior Guard Mary Clougherty put the Mountain Hawks into round four.

In the final quarter of the game, the Terriers failed to win, trailing the NCAA tournament by 10 points.

Moseley said several of Lehigh’s strategies, offensive and defensive, made it difficult for the Terriers to succeed.

“They spread us a little defensively and took advantage of our center,” said Moseley. “We were a bit scared of the three. We didn’t want to sit in that high post too much and give up wide open threesomes. “

Next season, Moseley said her team will need to make improvements over the summer in order to “take a step forward”.

While the Terriers have no more games this season, Moseley has been excited about next year and about what their team, especially the younger players, can achieve.

“You hate trying to turn the page but you can’t go back,” Moseley said. “We just have to be happy.”

Lehigh earns No. 13 seed, draws West Virginia in first round of NCAA Tournament