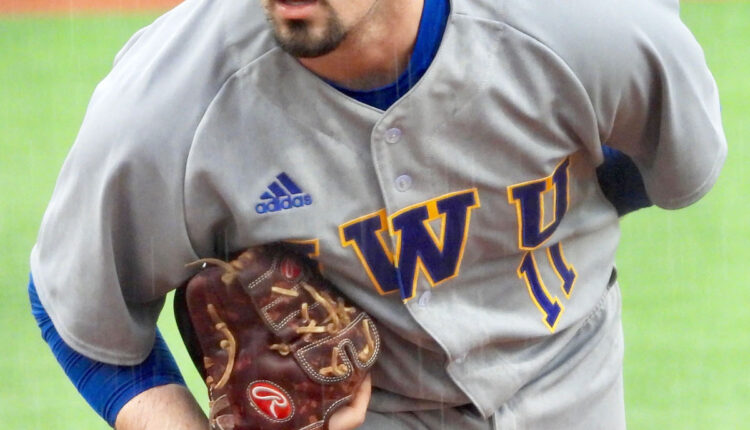 Johnson & Wales senior pitcher and 2016 Tolman college graduate RYAN DEPATIE preparing to pitch a pitch in the rain have a 4-5 record in 22 career appearances (13 of them start) for the Wildcats and 53 strikeouts in 69 innings of work.

PAWTUCKET – Every two years Depatie brothers Ryan and Kyle always had the opportunity to play baseball together, be it in youth leagues, at Tolman High or on this year’s Johnson & Wales University team.

But the time they spent with the Wildcats as teammates ended abruptly in the second week of March as concerns about COVID-19 quickly spread across the country. Classes were postponed and later put online, and spring sports were completely abolished.

Kyle is a freshman pitcher and has plenty of time to make up for the lost year, but sadly, that’s not the case with Ryan, who is a senior pitcher and was excited to be playing his final college season with his younger brother.

“March 12th was the day,” said Ryan when he found out the season was about to be canceled. “I’m not going to lie, it’s hard to think about. We all saw it coming, but it’s different when we’re all sitting in one room and finding out that we’re done. Just finished.

“We started with four weeks of testing in September,” he added, “and then we went to winter training, pulled our tails off and started the season hungry to play. And now it’s all completely free. “

Back to happier times when the Depaties were in high school. Ryan visited Davies Tech while Kyle went to Tolman. Ryan eventually moved to Tolman and after being forced to sit out half of the 2015 season under the RIIL’s transfer rule, he was allowed to play with his younger brother.

In this 2015 season, Tolman reached the best-of-three championship series of Division II at McCoy Stadium and had to admit defeat to the Mount Saint Charles Academy with 2-3 defeats.

“It was cool and fun to play with my brother,” added Kyle. “We have played together all our lives and with my brother by my side on the field it really helps me and my game get better.”

“We grew up playing the game together and it’s always been a special feeling to play on the same team,” said Ryan.

Despite being the older brother who graduated from Tolman in 2016, Ryan was considered a freshman to Kyle’s veteran status with the Tigers.

“Oddly enough, when I left Davies, Theo Murray, our coach, said to me on day one, ‘Your little brother has seniority over you so you have to listen to him,'” Ryan recalled. “It was a running joke all year round.”

“It was his first year and he had already started and I came as a pitcher hoping to get some time,” Ryan continued. “It was great to see him every day and play the game we love together. I think about it every day and how lucky we were to do this and share these memories. “

By the time Ryan graduated and continued his baseball career with the Wildcats, Kyle, who graduated from Tolman in 2018, admitted that he always knew they would play together again. In the end, Johnson & Wales was perfect for the younger Depatie and both brothers would play on the same team again.

“It was very exciting for me to play with my older brother my freshman year,” added Kyle. “There are so many extra things that a college team needs, so Ryan had to help me a lot in the beginning to keep track of things. My brother on the team, who already has experience, relieved me of a lot of stress and made the adjustment process much easier. “

Ryan was the start and loser in the third game of the season for the Wildcats, who went 3-3 on their spring break trip to Myrtle Beach, SC. The Wildcats suffered a 13-9 loss to the Moravian College of Bethlehem on March 4th. Penn., But in that competition Kyle made his college debut by working 1 1/3 innings out of the bullpen.

“We’ve played the same games all our lives,” said Kyle, who appeared again this season and threw 1 2/3 perfect innings of relief in a 5-2 win over the State University of New York at Fredonia 6th March. “It was always a great feeling when he started the game on the hill and I finished it.”

The brothers agreed that the best part of their shortened season was the trip to Myrtle Beach. Ryan said her grandmother and mother got to see her in the same game.

“It’s fun to talk about different bats, different pitches, our thoughts and what we could have done to hits,” said Ryan. “It’s a different kind of fellowship with your brother, and it’s special when you can get together on the same thing.”

The Wildcats played a seventh game against non-conference rivals Salve Regina University in Newport on March 10, but ended with an 8-8 tie in the tenth inning of Darkness. They should resume the game in Providence on April 21st.

Ryan said they had a tight-knit team of 15 seniors that looked more like a family. With online classes, no sports, and possibly no graduation ceremonies, there wasn’t much human contact.

One of the 15 seniors on the team is another Tolman alumnus, Rich Boudreau, who, like Ryan, graduated in 2016. The utility player, who fought 37 games as a junior with the Wildcats against .329, was 9 against 18 and drove five runs in five games that season.

Ryan, who majored in marketing, said that although he hadn’t planned to, he would like to go to graduate school this fall and get his MBA in marketing, as well as the opportunity to play baseball with his brother for another year.

After college, Ryan realized that he wanted to pursue options in the corporate world, preferably in sports or sporting goods companies. He said he could also envision owning and managing real estate in the future.

As for the losing season, “it feels dystopian,” said Ryan. “I just want to go back out with the boys and throw a ball around. To deal with this, I try to reflect on my great memories of baseball, keep them close to me, and wait through those interesting and uncertain times. Baseball never goes away. “

Johnson & Wales freshman KYLE DEPATIE, who graduated from Tolman in 2018, made two appearances in the Wildcats Bullpen earlier last month.