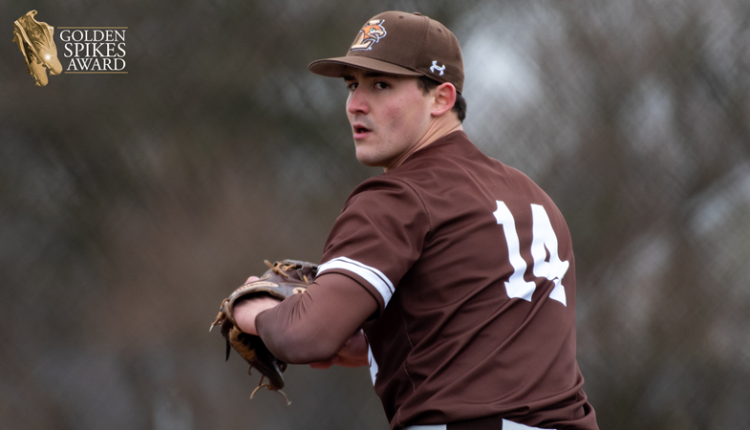 CARY, NC – Lehigh Baseball junior right-handed Mason Black continues to prove on the diamond why he’s one of the most talented players in the country. He was added to the Golden Spikes Award Midseason Watch List announced by USA Baseball on Wednesday afternoon.

Black is one of 45 athletes across the country on the list and just one of eleven to stay on the list from the preseason that featured 55 names. The Golden Spikes Award Advisory Board will continue to maintain an on-going list of athletes allowing players to consider themselves for the award before the semi-finalists are announced on June 8th.

Like the preseason watchlist, Black is the first Lehigh player in program history to appear on the mid-season list and only the fourth in Patriot League history, for the first time since Navy’s Noah Song in 2019.

On Tuesday June 8th, USA Baseball will announce the semi-finalists for the 2021 Golden Spikes Award. The list of semi-finalists is then sent to a voting panel composed of members of the baseball media, select baseball professionals, current U.S. baseball employees, and the past award winners, who represent a group of more than 200 voters. As part of this selection process, all voters will be asked to select three players from the list of semi-finalists. On June 24th, USA Baseball will announce the finalists and voting for the winner will begin on the same day.

Fan voting will again be part of the Golden Spikes Award in 2021. Starting with the announcement of the semi-finalist and until the end of the voting period for the finalist round, fans from all over the country can vote for Mason on GoldenSpikesAward.com.

The winner of the 43rd Golden Spikes Award will be named in July.

Black’s next outing is crucial on Saturday against Army West Point as the team kicks off a four-game streak in the battle for first place in the Patriot League.