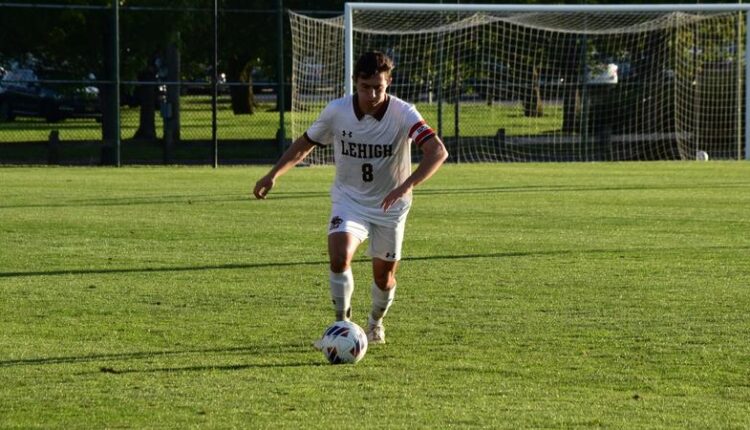 BETHLEHEM, Pa. – Lehigh and Delaware were two minutes from a scoreless draw Tuesday night at the Ulrich Sports Complex, when sophomore Yoni Aidlberg scored on a perfectly placed free kick to give the Mountain Hawks their second straight victory, 1-0.

Aidlberg’s second career goal, which officially came with 1:58 to play, gave Lehigh the advantage in a game that was virtually even through the first 88 minutes. The Mountain Hawks are now 2-3-1 on the season, while the Blue Hens fall to 2-5-1.

“Yoni is a soccer guy and he has a good soccer brain,” Lehigh head coach Dean Koski said. “He’s hard-working and really committed to wanting to contribute to this team. He spends a lot of time at practice on dead balls and he hits a good dead ball. The goal is something that is earned because he practices it. That’s why he steps over the ball.”

The teams played a scoreless first 45 minutes with shots even at 3-3. All three of Lehigh’s shots came in the game’s first nine minutes. Delaware had a quality chance off a corner kick late in the half, but senior Jack Sarkos got his body on an Alonso Rodriguez attempt in front and was able to deflect the ball out of harm’s way.

The second half saw a floating shot from sophomore Perry Kingson bang off the crossbar early on. Lehigh had several other corridors but the game remained scoreless.

Junior Athanasios Cosse was tripped up at the edge of the 18-yard box with two minutes remaining, and Aidlberg stepped up and bent the direct free kick around the wall and into the upper left corner of the net.

“We had a couple chances in the second half but they did a good job of boxing us out,” Koski said. “We didn’t get as many looks at the goal as we would’ve liked. We would’ve liked to find a goal through the run of play, but Yoni’s goal was timely and important.”

A couple of late opportunities for the Mountain Hawks led to a final 12-8 edge in shots, while Delaware had a 6-5 advantage in corner kicks.

“It was evening, but don’t break defensively,” Koski said. “We did a good job defending our box when we needed to. Delaware did a good job keeping pressure on us at times, but we weathered it. I felt like it was a good defensive game from us.”

The Mountain Hawks return to Patriot League play on Saturday when they visit defending league champion Loyola. Game time is set for 3 pm with streaming coverage on ESPN+.