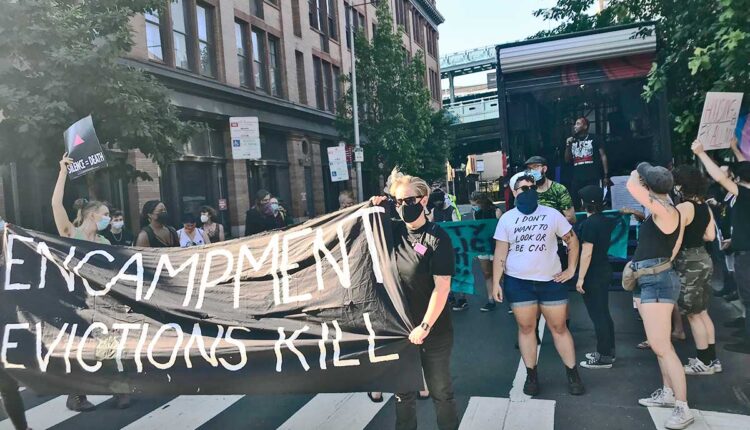 PHILADELPHIA — To mark the end of Pride month and the ongoing fight for adequate housing, members of the Philadelphia chapter of the HIV/AIDS activism organization ACT UP held a protest outside of Mayor Jim Kenney’s condo in Old City.

Around 40 ACT UP members and activists gathered to demand more plentiful permanent housing for Philadelphians facing homelessness, many of whom are Black and Brown and LGBTQ+. They also called for an overhaul of the leadership of Philadelphia’s Office of Homeless Services (OHS).

Organizers showed the duality of Pride by holding a dance party in the street after making their demands known, with musical support from DJ Dot zerozerozero and The Bearded Ladies Cabaret.

“Everybody’s seen homeless people walking down these streets,” Wildheart said at the protest. “They ain’t hiding. They’re right here in your eyes asking for change… How many times are you going to put mamas and babies out on the street?” 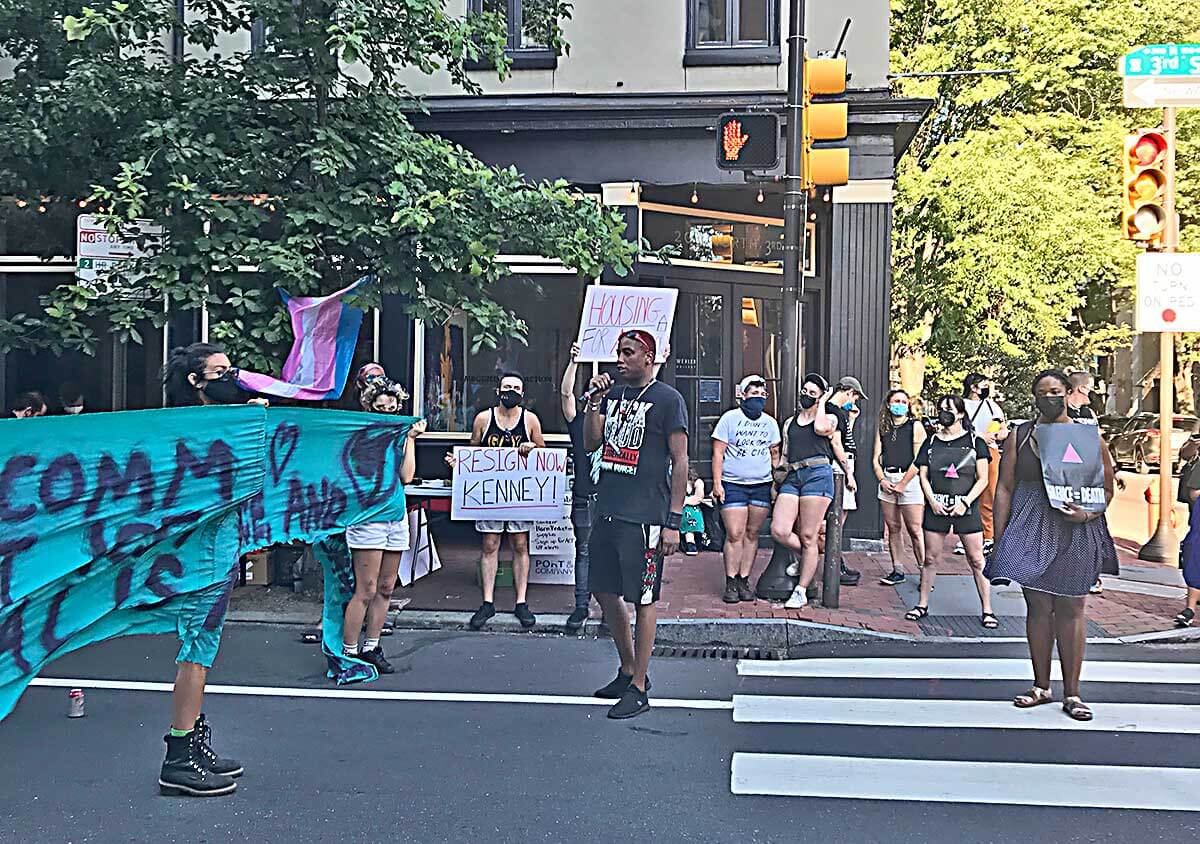 ACT UP has demanded that the city place a moratorium on all evictions, including encampment evictions; establish an oversight board comprised of unhoused individuals and those using OHS services who will review OHS policies, practices and personnel; reopen COVID hotels until everyone has access to housing; institute housing-first, trauma-informed programs that swiftly place people in permanent housing; remove OHS Director Liz Hersh and all OHS upper management from office; and “immediately evaluate every contractor that you have that provides services to homeless people in this city to make sure that they are providing true, shelter-informed, housing-first care,” Henderson added at the protest.

In response to ACT UP demands, a city spokesperson told the Philadelphia Gay News that “while the City readily acknowledges that any homelessness is too much homelessness, the Office of Homeless Services’ housing-first approach adopted by this administration is saving lives and reducing suffering. OHS aims to make homelessness rare, brief, and non-recurring in Philadelphia amid a national housing crisis.”

The spokesperson cited the City’s Encampment Resolution Program, saying “encampment resolutions, when they occur, are a social services-led process with the primary goal of [connecting] Philadelphians with vital services, especially housing and treatment. Most people accept services.”

They said that OHS currently has a board called the Roadmap to Homes, a requirement of the U.S. Department of Housing and Urban Development (HUD), composed of six committees: Lived Experience, Providers, HUD Alignment, Young Adult Leadership, Coordinated Entry and Racial Equity.

In terms of COVID-19 safety, the spokesperson told PGN that the city is running two community-based COVID Prevention Spaces for people 65 and up and those with chronic illnesses. Those spaces provide “safe, non-congregate rooms and services for those most vulnerable to COVID. And participants are prioritized for long-term housing.” Plus, the City implemented three “community-based Single Room Occupancy programs.”

During the protest, ACT UP organizers played anonymous audio clips of people who previously lived in the PATCO homeless encampment.

One individual said via the recording, “if somebody’s in a situation, or somebody [needs help], and they can’t really get the help, why evict them or try to put them in a worse position — in a position they can’t get themselves out of?”

Henderson shared a story from a friend who works for the Philadelphia shelter system to illustrate that many shelter staff are not trans-competent, and that the gendered entry process creates a roadblock for trans people who seek access to shelter. Henderson’s friend worked with a trans woman with a speech and hearing disability.

“[The trans woman] was often read as a masculine or gender-ambiguous person,” Henderson said, quoting their friend. “She was turned away from House of Passage several times, despite writing down that she was a woman and was homeless and in need of a place to stay.”

“You have to understand that identities are intersectional, so folks who are experiencing houselessness may also be [people] living with HIV,” Naiymah Sanchez, trans justice coordinator for the ACLU of Pennsylvania, told PGN at the protest.

BBWC’s Muhammad spoke about homelessness as an HIV/AIDS issue.

“As someone who’s lived with the virus, as someone who’s HIV-positive, I’ve worked in AIDS nonprofits in the city and I saw the critical housing needs of folks who would come in to test,” they told the crowd. “We know that you can’t be on your meds properly — we want folks to be on their meds if they don’t have a place to lay their head. This is a health issue, it’s an issue about humanity too.”

In light of World AIDS Day in December, 2020, ACT UP Philadelphia sent recommendations to members of the Biden/Harris HUD review team, calling ample housing an HIV prevention tool. The organization’s statement includes a quote from Dr. David Holtgrave from the Housing and HIV/AIDS Research Summit IV, which reads in part: “Housing status is likely the most important characteristic of each [person living with HIV/AIDS] who seeks services — the most significant determinant of each PLWHA’s health and risk outcomes.”