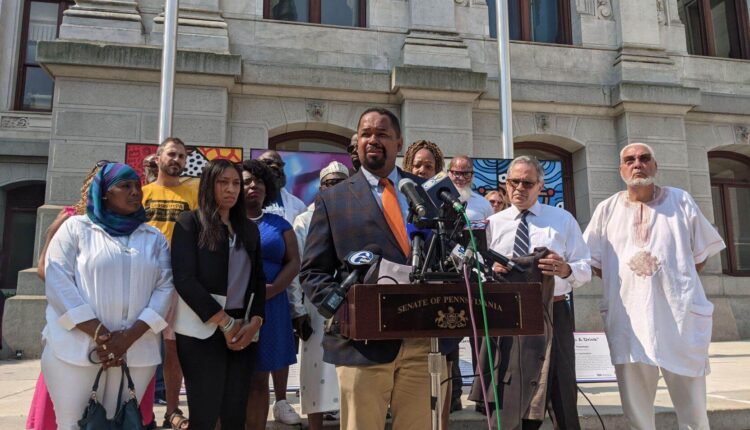 PHILADELPHIA — Hours before state Sen. Sharif Street was to bury a close relative gunned down over the holiday weekend, the North Philadelphian official said the political will to solve gun violence was lacking because the overwhelming majority of murder victims are African Americans and other people of color.

On Tuesday, Street, D-Philadelphia, accused the Republican-controlled state Legislature of failing to reduce the surging gun violence that killed his 21-year-old cousin-in-law Salahaldin “Lala” Mahmoud among hundreds of others this year in the city.

“If they were shooting up Rittenhouse Square, it would be a different situation,” the Democratic senator said.

“If this started happening in districts and communities that were primarily — that were all white, in suburban and rural, then the legislature and everything else would change the system and react differently,” Street added. “And I think that is true.”

Street and his wife, April, were flanked by city and state officials, as well as community activists outside City Hall during a news conference over his cousin-in-law’s murder, who was one of two people killed in the West Philadelphia shooting.

Officials pleaded for witnesses or individuals with information about crimes to contact law enforcement, saying they should trust the officials they elected, while others pressed for state leaders or the U.S. Congress to enact new gun restrictions, like universal background checks for firearm purchases.

House Minority Leader Rep. Joanna McClinton, a Democrat representing parts of West Philadelphia and Delaware County, called on federal officials for help and said community members suffering from the violence should step up.

The GOP-controlled state House of Representatives and Senate is firmly opposed to any new gun control regulations. State law prohibits Philadelphia from enforcing its own gun control measures.

Community activists and officials have acknowledged for years the troubled police department suffers from low community trust, especially among people of color. A no-snitch culture hurts efforts to compel individuals with information about crimes to come forward.

Sen. Vincent Hughes, the ranking Democrat on the Senate Appropriations Committee who represents parts of North and West Philadelphia and Montgomery County, reiterated his demand for Republican legislators to unlock billions of dollars in unspent federal coronavirus pandemic stimulus funding that could bolster violence prevention efforts.

“We’ve got more than enough resources in Harrisburg right now,” he said.

On the Fourth of July during a barbecue cookout, more than 100 bullets were fired into the crowd gathered outside of Premiére Bande along the 100 block of South 60th Street, a clothing business celebrating its anniversary, around 10:42 p.m.

The Sunday shooting killed Mahmoud and 23-year-old Sircarr Johnson, and injured a 16-year-old girl, who is in stable condition, police said in an email Tuesday. Johnson was the owner of Premiére Bande, according to news reports.

Street choked up discussing his cousin-in-law’s murder. April, Street’s wife, left the news conference at one point, sat beside a nearby statue, and cried.

Mahmoud had recently started his own towing business and bought a tow truck. Street recalled that Mahmoud always had a smile on his face and was “full of big ideas.”

“He was trying to build businesses,” he said of Mahmoud.

Councilmember Jamie Gauthier said the shooting at the West Philadelphia cookout, which happened in her 3rd District, was senseless and unthinkable.

“And it also adds to the feeling that Black and brown people in our city can’t be safe where they live and can’t enjoy the same quality of life as everyone else in the city,” Gauthier said. “And that’s incredibly unjust and wrong.”

Darryl Shuler, a community activist who leads the violence prevention nonprofit Put It Down, said issues around race hindered the reduction of violence in Philadelphia and throughout the U.S. While the vast majority of murders of Black people go unsolved, Shuler questioned the speedy arrest of a suspect in the killing of a white man in the Brewerytown neighborhood days after the murder earlier this year.

“If this was white folks getting killed every day, you’d all have this problem resolved already,” said Shuler, who has lost four immediate family members to gun violence.